As news of his death was reported, celebrities took to social media to remember Carter’s life and legacy. 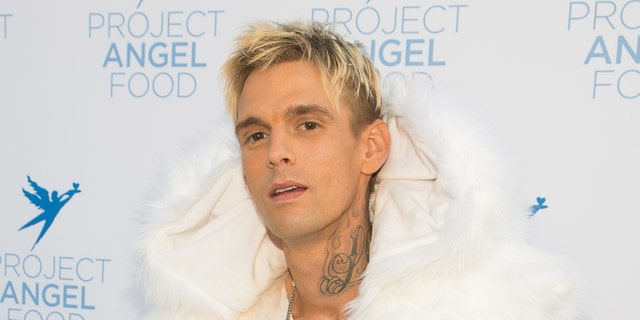 Aaron Carter revealed he and his fiancée Melanie Martin have welcomed their first child together, a son named Prince.  (Gabriel Olsen/Getty Images)

“I’m deeply sorry that life was so hard for you and that you had to struggle in-front of the whole world.” Duff wrote in an Instagram post Saturday evening. “You had a charm that was absolutely effervescent… boy did my teenage self love you deeply. Sending love to your family at this time. Rest easy.”

Carter, who is the younger brother of the Backstreet Boys’ Nick Carter, was known for his hit rap songs “I Want Candy” and “That’s How I Beat Shaq.”

“Met Aaron Carter in 2018, funny, talented and cool. I felt that he was trying….he really was just trying to be happy. I’m sorry to hear of his passing.. Condolences to his family and fans,” television host and comedian Loni Love wrote in a tweet.

In addition to music, the rapper also guest-starred on an episode of Disney Channel’s “Lizzie McGuire,” and appeared in Broadway’s “Seussical” in 2001.

He also competed in “Dancing with the Stars” in 2009, starred in the reality show “House of Carters” and appeared on the reality series, “Marriage Boot Camp: Family Edition.”

“Fame at a young age is often more a curse than a blessing and Surviving it is not easy. RIP Aaron Carter.” songwriter Diane Warren wrote.

“Rest in peace Aaron Carter. I am in tears right now hearing of your death. I just talked to you on Wednesday & you seemed in good spirits. You were such a sweet soul that never had a chance. I’m heartbroken that your son, who you wanted so much will never get to know you.” alternative rock singer-songwriter Samantha Scarlette wrote.

Carter is survived by his 11-month-old son, Prince, whom he shared with ex-fiancée Melanie Martin.

“Feel terrible about Aaron Carter passing away. He always seemed like such a tortured soul. He just had his son. Now a boy is without a father and this man passed on far to young. Just a terrible tragedy of a day. RIP Aaron.” actor and reality-TV star Joey Sasso wrote.

“So bummed to hear the news about Aaron.” singer-songwriter Parson James wrote on Twitter. “The few interactions I had with him were extremely sweet but most definitely sad. Media and our culture can be so vicious.”

“Kim Possible” actress and singer wrote, “Incredibly sad about the passing of Aaron Carter. My thoughts and prayers go out to his friends and family.”

“Aaron Carter was one of the first friends I made in LA. He was so supportive through my transition & was always a genuine friend. He introduced me to my first acting coach & helped me in more ways than I think he realized. I’ll miss you. I wish I could hug you 1 last time. RIP” trans activist and singer Plastic Martyr wrote.

“I kept up with him a lot & while things he said or did was funny to react to, its obvious he’s been fighting a battle with drugs & I really hoped he’d be able to win his battle. Heartbreaking that he didn’t & died so young. Thoughts go out to his family,” he wrote.

Sarah Rumpf is a Fox News Digital Production Assistant. You can reach her on Twitter at @rumpfsarahc

Michael Douglas, 78, looks frail as he continues to show off new hair at basketball game – Express

These tributes for Bob McGrath from ‘Sesame Street’ will make you cry – Motherly Inc.

Alec and Hilaria Baldwin Celebrate Thanksgiving with All 7 Kids – PEOPLE