July 25, 2022 – 20:50 BST Beatriz Colon Gavin Rossdale fans are happy as ever since the star took to Instagram to announce that he is releasing new music this week

Gavin Rossdale fans, rejoice! He shared some ultra exciting career news, and it is all happening sooner than you think.

The star took to Instagram Monday afternoon to reveal that not only is he finally coming out with new music, but fans won’t have to wait too long, as the release will happen on Wednesday.

He was smart about giving fans what they surely want, already sharing a snippet of his new song.

The new Bush single will be titled More Than Machines, and it has a loud rock tune familiar to any longtime listener of the English band.

The singer even revealed some of the lyrics of the new song, which read: “Don’t step on my toes, let the weather go, it’s been a long wait in bed, say what…”

Fans can’t wait to listen to the full version

He announced the release date in the caption along with a black heart emoji, and his eldest daughter, Daisy Lowe, was one of the first to extend support over the career news, leaving a string of fire emojis in the comments section.

Of course his fans weren’t too far behind when it came to expressing anticipation over the incoming single, writing: “Can’t wait- looking forward to it!” and: “You write the best songs!!! They are timeless and brilliant, every single one!!” as well as: “This is everything,” plus: “Counting the days.” 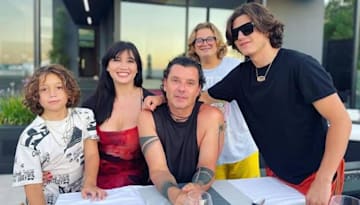 Ahead of the announcement, Gavin spent some quality time with his biggest supporter, Daisy of course! He shared an adorable family photo featuring all of his four kids, Daisy, Apollo, Zuma and Kingston.

His caption was as heartfelt as it gets too. He wrote: “Welcome to my world. The best few weeks at home with my better versions of me. Oh the joy they bring… My love is indeed ocean sized.”

Many Investors Are Fleeing the Stock Market, but Some Are Doubling Down: ‘If I Lose $15,000, I’m Not Going to Die’ – The Wall Street Journal