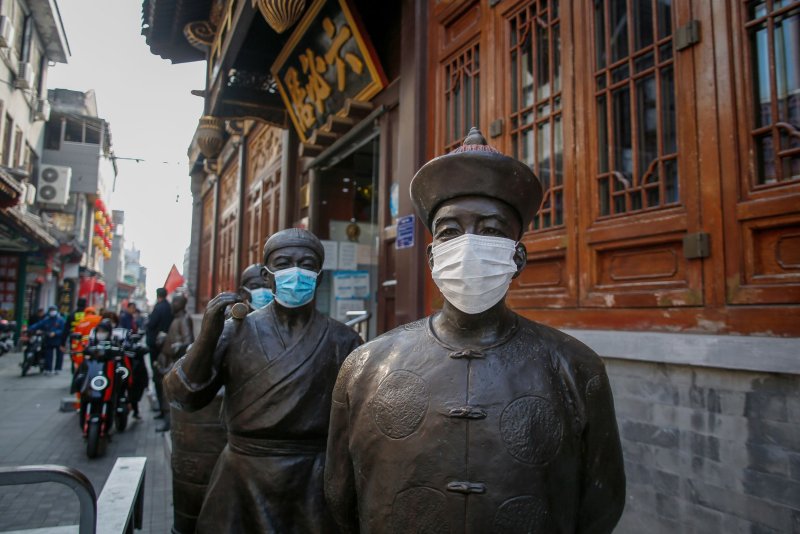 Statues wear face masks at a shopping district in Beijing, China, on Friday. China continues its travel restrictions and lockdowns a week ahead of the Communist Party congress. Authorities have banned people from leaving Xinjiang while the government. Photo by Mark R. Crinstino/EPA-EFE

Oct. 9 (UPI) — Coronavirus cases are surging in some European nations, including Germany, Austria, Italy and France at least 24% each in the past week, though world infections are down 7% and deaths 10% to among lowest since the start of the pandemic in March 2020.

Also, Mainland China, where the virus originated, has had a rise in cases, one week before the Communist Party congress in Beijing. Xinjiang, which is 7,500 miles west of the capital, is in a near lockdown, including people unable to depart the region.

Europe was the only continent to post a rise in cases over seven days, 2%, though deaths dropped 0.3%.

Some nations do not report data on weekends. The U.S. Centers for Disease Control and Prevention doesn’t report data on Saturdays, Sundays and holidays with plans to go to weekly updates on Oct. 20.

Few big countries reported increases in both categories in the past week, mainly in Europe.

European nations are experiencing case surges upon the arrival of cooler weather.

Despite a dramatic fall in testing, WHO data released Wednesday showed that cases in the European Union reached 1.5 million last week, up 8% from the previous week.

Hospitalizations also have spiked, including nearly 32% week in Italy with intensive care admissions up 21%, according to data compiled by independent scientific foundation Gimbe.

In Britain, which is not part of the European Union, they rose 45% in one week.

“There must be some complacency in that life seems to have gone back to normal – at least with regards Covid and people now have other financial and war-related worries,” said Adam Finn, chairman of an expert group advising the WHO on vaccine preventable diseases in Europe, told CNN.

And Penny Ward, visiting professor in pharmaceutical medicine at King’s College London, also told CNN: “Quite a high proportion of the population might have also had a Covid episode in recent months.”

Experts warn this situation could hit the United States.

“In the past, what’s happened in Europe often has been a harbinger for what’s about to happen in the United States,” says Michael Osterholm, director of the Center for Infectious Disease Research and Policy at the University of Minnesota, told NPR. “So I think the bottom line message for us in this country is: We have to be prepared for what they are beginning to see in Europe.”

But the situation may be different in Europe than the United States because of different levels of immunity and usceptibility to new subvariants they’ve not yet been exposed to.

“If it is mostly just behavioral changes and climate, we might be able to avoid similar upticks if there is broad uptake of the bivalent vaccine,” Justin Lessler, an epidemiologist at the University of North Carolina who helps run the COVID-19 Scenario Modeling Hub, told NPR. “If it is immune escape across several variants with convergent evolution, the outlook for the U.S. may be more concerning.”

Without new restrictions in place, including social distancing and masks, people should stay at home if unwell, Dr. Susan Hopkins, chief medical adviser at the UK Health Security Agency, said in a report by The Guardian.

These numbers are surging despite Omicron variant-adapted vaccines available since September for elderly and compromised immune system.

Since Sept. 5, about 40 million vaccine doses produced by Pfizer-BioNTech and Moderna have been delivered to member states, according to data from the European Center for Disease Prevention and Control. But only between 1 million and 1.4 million were administered in the past month.

The European Union one-shot vaccination rate for the entire population is 76.1% with Britain at 69.6%,according to Bloomberg tracking.

In all, more than 12.7 billion COVID-19 vaccine doses have been administered worldwide, a gain of less than 100 million in one week, with the world’s population of 7.9 billion. Mainland China leads with 3.5 billion doses administered and a 92.4% one-shot vaccination rate among the 1.5 billion population, the most in the world. India is second with 2.2 billion among the 1.4 billion population and a 74.4% rate.

Japan, which has an 82.8% one-shot vaccination rate among all residents, plans to drop a ban on individual tourist visits and remove a 50,000 cap on daily arrivals. Those were the strongest restrictions among the Group of Seven nations.

Prime Minister Fumio Kishida said in a speech last week it is “in principle unnecessary to wear masks outdoors.” Indoors is only encouraged.

China, where COVID-19 emerged more than 2.5 years ago, has reported 5,226 deaths. Before a spike in April, it was 4,636, which stayed at that number since early February 2021. On Sunday, China reported 503 cases with 5,659 on April 29. Those are confirmed cases with illness. Asymptomatic ones are reported separately in Mainland China.

In all, China reported 1,748 cases Sunday, more than triple the figure from the previous week.

In Beijing, the capita has tightened interprovincial travel to prevent residents from returning from their holidays.

Passengers traveling around China during this year’s festival week was about 60% below that in 2019.

Zhangjiakou, a city in northwest China with around 4.6 million, hasn’t reinstituted a citywide lockdown. But Zhang Ke, a Beijing resident who is not allowed to return home because he was near an outbreak, told the Financial Times: “95% of the residential compounds are closed. Shopping malls and supermarkets are closed. No one is on the streets.”

The nation’s top leaders convene in Beijing on Oct. 16.

Hong Kong, like China, has adopted a “zero tolerance” for coronavirus with strong restrictions eased, including hotel quarantine for arrivals from other nations.

The BA.5 Omicron strain has become the most dominant in the world, accounting for 81.3% of cases in the United States, according to the CDC projections through Sept. 30. The CDC didn’t give a report update Saturday. The strain was first tracked in late April.

The CDC has classified 3.3% of counties, districts and territories with a “high” category level, compared with 22.9% “medium” and 73.7% “low.” In “high” locations, masks are urged indoors.

The CDC says 5.3% of eligible people older than 12, around 11.5 million, have received the updated booster that targets Omicron after the rollout four weeks ago. Last week alone it was 3.9 milion.