WKU alumnus has started a vintage reselling business – The Herald 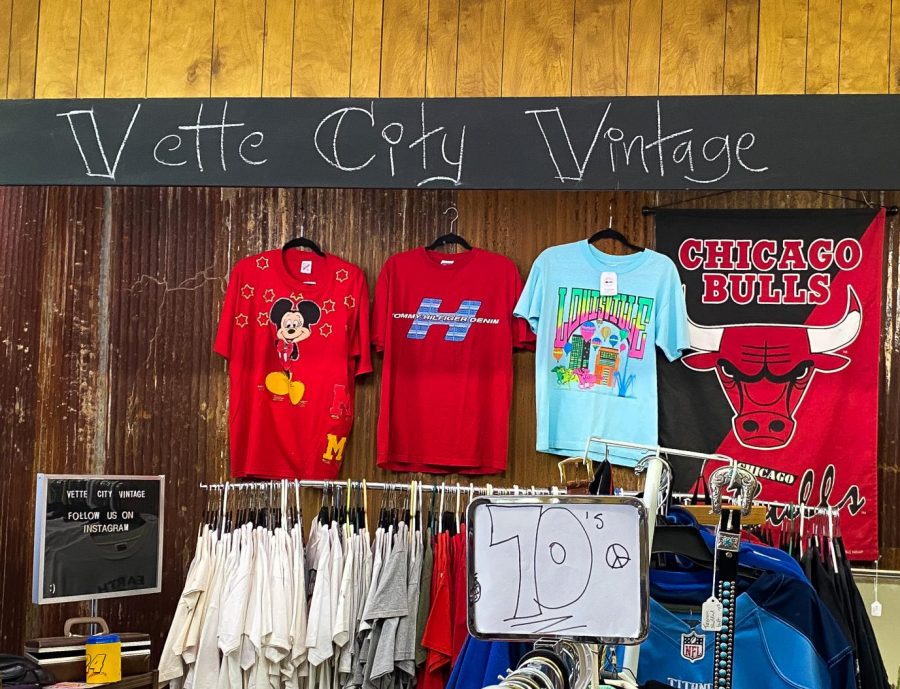 Gatlin is able to travel throughout Kentucky and Tennessee for his job in sales, which allows him to find various pieces including ball caps, vintage t-shirts and jeans.

Whether you’re looking for 90’s graphic t-shirts, ball caps, or denim, Vette City Vintage has all the finds you could be looking for.

Started in 2018, Vette City Vintage has grown on Instagram where the owners regularly post about new items available on their website or in their booth at the Consignment Corner.

Vette City Vintage occasionally does pop up shops throughout Bowling Green including on campus, at the Muse apartments, and an upcoming pop up shop at Fox Hole in the Grove, in Smiths Grove for their Memorial Day Makers Market.

The business is owned by Gatlin and Maddie Milam. Gatlin currently works in sales using his degree from WKU in finance, but uses the business as a “side hustle.”

“My wife and I had been going to the flea markets in Nashville, different vintage stores,” Gatlin said. “We really liked it so it sprouted that idea.”

Vette City Vintage is available across several different platforms, such as Depop, Instagram, their website, and at their booth.

“The booth didn’t actually start until a little over a year ago,” Gatlin said. “We actually started on Instagram and on Etsy, and started growing a following and our customer base. Then we later moved out of Etsy and started our own website.”

When the couple wanted to start selling at the Consignment Corner, Gatlin said the items they were selling were incredibly different from the items at the clothing booths at the store already.

“I think it’s a little different than those booths,” Gatlin said. “We focused on 90s more loud graphic T-shirts. At the time, they were selling what you would call true vintage, like 60s, 70s, formal wear slacks and smoking jackets. We wanted to focus on more casual stuff so she (the owner) let us.”

Originally, the couple found items at various thrift stores, but as shopping at thrift stores has become more popular, it’s been harder for them to find items, Gatlin said.

“For my sales job, I travel a lot,” Gatlin said. “I’m able to travel within a one hour, one and a half hour radius of Bowling Green, so at times I’ll find old junk warehouses or old abandoned general stores in these small towns off the interstate. I’ll be able to go in there and the owners usually let stuff go for pretty cheap.”

Networking with other vintage resellers has been another resource to find items, Gatlin said.

Their Instagram page has over ten thousand followers, which is one way they post items that are being sold online or at the booth.

“It’s just a matter of staying consistent, making good quality posts,” Gatlin said. “When I first started out, I was really deep into studying how social media works, how to get a big online presence. I try to find organic followers, I call it. People that are already interested in vintage. People that are following other vintage stores or commenting or liking on posts that are about vintage clothing items.”

Another reasoning for starting Vette City Vintage is to give clothes another life, so people are buying an item that has already lasted so long and will continue to last rather than purchasing a new garment.

“I really just want people to focus on responsible shopping, and not going to retail stores as much, and buying stuff that they know they’re not going to throw away in a year or two,” Gatlin said. “I think consumerism and all the hype of spending money and going shopping, and doing all that is really kind of done a lot of damage to the environment.”

“I went to school at Western for finance,” Gatlin said. “Through that you learn where your priority should be with money. I see people spending hundreds and hundreds of dollars every month on clothes that just aren’t gonna last them. That’s why we provide pieces that have already lasted at least 15, or 20 years.”

Gatlin said many larger fashion companies underpay children in countries such as Bangladesh, Taiwan and others as a way to make cheap clothing.

“Things were just made so much better back in the day,” Gatlin said. “They really focused on the quality of their garment, and not about how much it cost them to make it. I think nowadays it’s all about lower and lower lower price.”

Best Tips for How to Get Rid of Ticks

Best Tips for How to Get Rid of Ticks