Who is everyone hating on the Comic Sans font and what is their problem?

Get off your Helvetica high horse

There are few things more controversial and hated than the Comic Sans font. There are memes online about it, tweets of hatred and even petitions for its removal – yes, seriously. It’s incredible that the curvature and spacing of letters can evoke such emotions.

I have had enough of this unnecessary hatred. For one, Comic Sans is actually the most accessible font for dyslexic people. 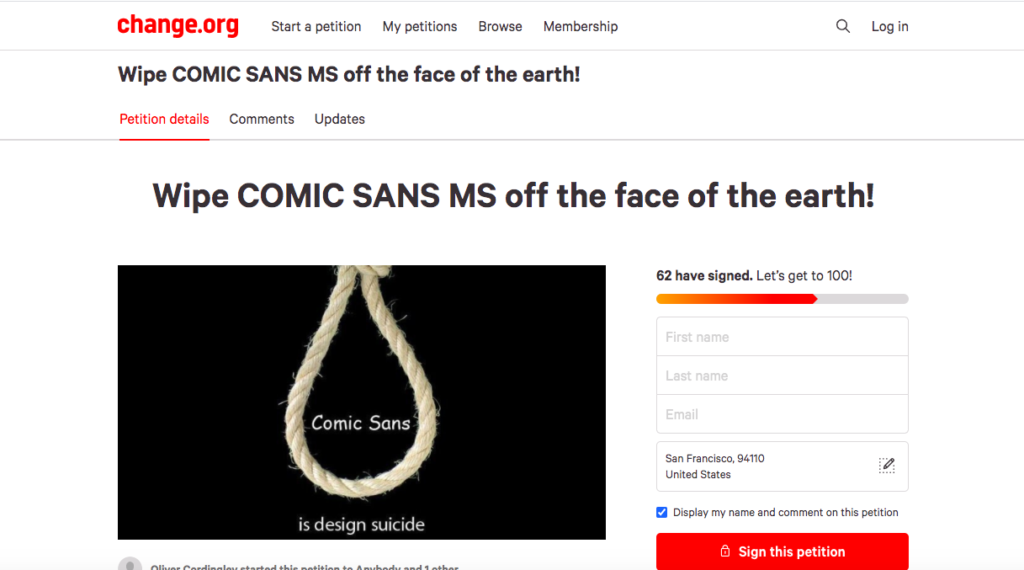 More importantly, how exactly is your life so boring that you have all this free time to hate on, wait for it, a font? I’m almost impressed by your passion. Almost.

Where the font began?

Comic Sans is a 90’s baby (like the best of us) described as “a non-connecting script inspired by comic book lettering, intended for use in informal documents and children’s materials”. Originating from comic books is pretty cool if you ask me. Vincent Connare, its inventor, cites The Dark Knight comic as one of the inspirations.

Comic Sans MS is a sans-serif casual script typeface designed by #vincentconnare and released in 1994 by Microsoft Corporation.⁣ ⁣ if you google “the most hated font in the world” you’ll get COMIC SANS, I wanted to know the story behind this popular hatred, so I did some research. and it turns out that CS has a special and unique personality that it can’t be used in every project, but non-designers don’t know that.⁣ ⁣ here is a link that I would recommend if you want to know more about Comic sans https://theconversation.com/is-comic-neue-the-new-comic-sans-sans-the-comedy-25697⁣ ⁣ if you’re interested in the new version, designed by @craigrozynski it’s available at google fonts or you can download it from http://comicneue.com/⁣ ⁣ Hey, we shouldn’t as designers hate any design element be it font, color, images, shape… our job is to use them properly.⁣ ⁣ that been said, I want to know what you guys think, so take a minute and share your thoughts in the comment section below. ⁣ ⁣ ⁣ ⁣ ⁣ ⁣ #comic #comicstrips #comicbooks #comicart #cómic #comicfont #comicfont #comicfonts #comicfontsbackground #fonts #fontdesign #fontstyle #fontlove #typedesign #typeverything #typelove #comicsans #comicsansms #comicsansfont #comicsans4life #comicsansgallery #comicneue

Comic Sans is also the bad boy of all the fonts. Connare said it “was breaking the typography rules” due to the difference in heights of all the letters. So, if you’re looking to spice up your next piece of coursework, I dare you to submit it in Comic Sans.

Where did the hatred start?

Honestly, we’ll never know. Maybe the perception of it as childlike makes adults want to distance themselves to show they have outgrown the need for Comic Sans.

Whether people hate the font because it’s “childish” or because they have nothing better to do, online mockery is everywhere. There’s even a website called Comic Sans Criminal to call out people for using the font. It even includes a name and shame section. I wish I were joking. 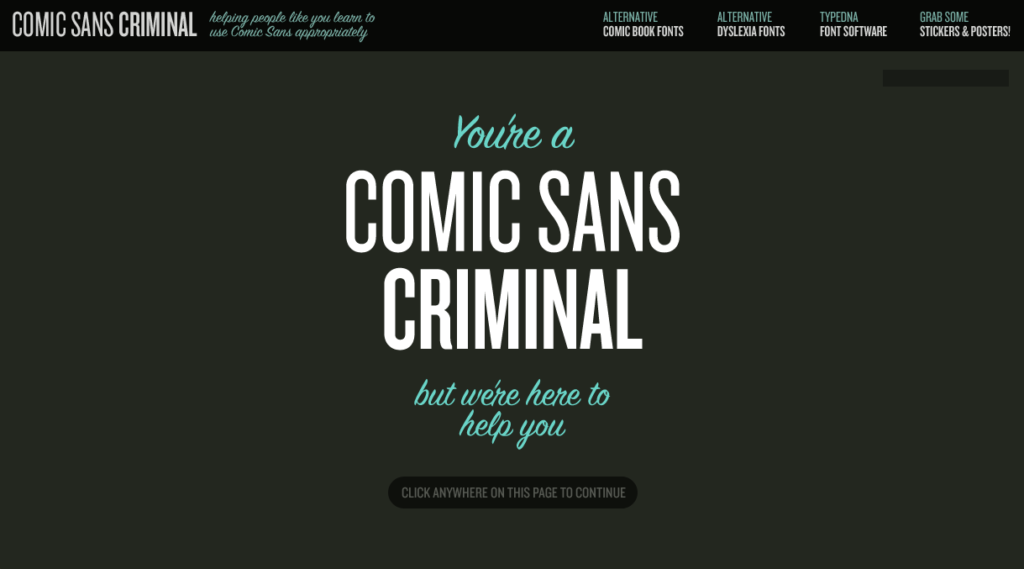 Whilst people are entitled to their own opinions on fonts, the argument that the font is childish and unprofessional is entirely down to systematic prejudices.

Why Comic Sans is actually elite

Comic Sans is listed by The British Dyslexia Association as one of the best fonts to use for people with learning disabilities such as dyslexia. Citing that it spaces the letters out more so than other fonts (*cough* Times New Roman *cough*). With it being estimated that in the UK one in ten people have dyslexia, this font’s accessibility should be celebrated.

If you are hating on Comic Sans just because it looks unprofessional, ask yourself why? How can the way letters are arranged on a screen dictate so much meaning?

Get off your Helvetica high horse. If a font makes reading something easier, I don’t understand the issue.

If you have joined the band wagon of hating Comic Sans for absolutely no reason at all, please consider why you hate it so much. I am not by any means saying that the font is the best and only font that should be used. I merely want people to stop the Comic Sans witch-hunt.

If Comic Sans were a club, it would be Hive: polarising but accessible to everyone.

People say they don’t like it, but really, you can’t deny it is good fun.

Related stories recommended by this writer:

• Do you fancy a tortoise for a housemate? If so, then this Edinburgh mansion is for you

Trump and Biden Agree on Pebble

Trump and Biden Agree on Pebble

Saweetie Impressively Balances in Nearly 5-Inch Heels for a Photoshoot

The future of conservation: An interview with Roman Dial | Hatch Magazine

Figuring Out What To Bring for Camping? Here’s A Helpful Checklist