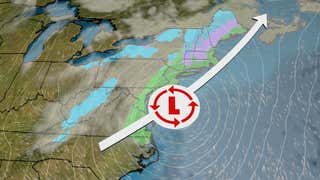 An East Coast storm called a nor’easter will develop this weekend, bringing rain, wind and snow to parts of the Northeast.

Similar to the storm earlier this week, named Winter Storm Dane by The Weather Channel, this weekend nor’easter is expected to develop from the teaming up of energy from two jet streams.

(MORE: What is a Nor’easter)

However, this weekend storm will track much farther east than the storm earlier this week.

This means some areas that were soaked with heavy rain earlier this week may instead see snow. Other areas hammered with snow earlier in the week may see little precipitation. However, some areas may once again see a soaking this weekend as they did earlier.

Winter storm watches have been issued by the National Weather Service for parts of New England from Massachusetts to Maine where heavy snow could make travel conditions difficult, if not dangerous, this weekend.

We also expect this low-pressure system to intensify Saturday near the Eastern Seaboard, possibly rapidly enough to satisfy the criterion for a bomb cyclone by later Saturday.

Let’s start by laying out the timing of the storm, then the snow, rain and wind forecasts.

The low pressure system will begin to strengthen as it moves eastward.

Rain and a few thunderstorms are expected in the Southeast during the day and will extend into parts of the Mid-Atlantic states. Isolated strong to severe thunderstorms may develop in the Florida Panhandle and the eastern Carolinas.

On Friday night, rain will stretch from Florida into southern New England. Some precipitation along the northern fringe associated with a cold front may fall as snow in parts of the interior Northeast and in the Appalachians.

Low pressure will intensify and track from near the Mid-Atlantic coast to off the New England coast by evening.

The exact track of the low will be crucial for determining any impacts. That includes where the rain-snow line will set up and the strength of winds this system might produce.

The best chance of wind-driven rain will be in coastal and southeast New England and Long Island. However, rain may change to some snow later Saturday and Saturday night in parts of southern New England.

Rain should end by afternoon from New Jersey southwestward.

Strong winds are likely throughout the Northeast, particularly in coastal New England, as this system intensifies near the coast. Power outages may be possible.

By Sunday morning, most computer models suggest low pressure will be heading into New Brunswick or Nova Scotia, Canada.

Lingering snow is expected in parts of Maine and possibly over the high country of northern New Hampshire and northern Vermont.

Gusty winds may also linger in New England and possibly other parts of the Northeast.

There is still some uncertainty on the exact track the nor’easter takes near the Northeast Coast, which could affect the exact placement of both the rain/snow line and heaviest snow.

The best chance of heavier snow totals, in excess of 6 inches, is over much of Maine, except the immediate coast, as well as New Hampshire. Snowfall rates of 1 to 2 inches per hour are possible in intense, small-scale snowbands.

(MORE: 6 Things to Know About Your Snowfall Forecast)

The most uncertainty in snowfall amounts is over southern New England, given the uncertain low track and marginal supply of cold air.

If precipitation changes to snow earlier and/or the low tracks a bit farther east, heavier snow may fall in southern New England, particularly in Massachusetts. For now, we expect mainly rain in downtown Boston, but at least some snow accumulation in the western and northern suburbs.

Lighter snow accumulations are expected in most of Vermont, parts of upstate, central and western New York, and the Appalachians.

Rain is expected along the Interstate 95 corridor from New York City to Washington D.C. Locally heavy rainfall is possible, but only isolated, minor flash flooding is expected.

The National Weather Service has issued a high wind watch Saturday afternoon and evening in parts of southeast Massachusetts, including Cape Cod, Martha’s Vineyard and Nantucket, where gusts from 50 to 60 mph could down trees and knock out power.

Strong wind gusts over 50 mph are also possible Saturday and Saturday night in Long Island, over higher terrain of New England, and along the coast of Maine.

Power outages and tree damage are also possible from the weight of heavy, wet snow and winds in the aforementioned parts of northern New England.

What to Know About Old Lures and Vintage Fishing Lures

7 of Gisele Bündchen’s most iconic outfits

7 of Gisele Bündchen's most iconic outfits