US investors set to test companies’ handling of coronavirus

US companies are facing the largest number of demands from investors to address environmental and social concerns in four years, as shareholders press management teams over their handling of the Covid-19 pandemic.

Investors have submitted 484 proposals on environmental or social issues to US companies ahead of this year’s annual round of shareholder meetings, to be held in coming weeks. That compared with 446 last year, according to Institutional Shareholder Services, an investor advisory business.

Shareholders in the US are able to sponsor their own concerns to put before boards. Though proposals are not binding, companies cannot easily ignore votes that get more than 30 per cent support.

Companies complain that proposals are often sponsored by labour unions or gadflies, but in a sign of shifting investor sentiment, last year BlackRock, one of the world’s largest fund managers, said it would consider supporting more proposals this year.

“The shift from just disclosure to accountability — generally, in terms of shareholder engagement and proposals — is increasing and accelerating,” said Peter Reali, a senior director at asset manager Nuveen. “Part of what is driving that acceleration is some of these Covid-related issues.”

Pfizer and Johnson & Johnson are facing calls from shareholders for greater disclosure on pricing of Covid-19 vaccines and therapeutics. The companies received government aid to develop treatments but have not specified how they will price their medications, the shareholder petitions said. Both companies have meetings on April 22.

Charging a high price for Covid-19 medication “could damage Pfizer’s reputation and create a regulatory risk for the company”, said Trinity Health, which filed the petition. Johnson & Johnson has said its not-for-profit pricing would last through the pandemic. Pfizer did not immediately provide a comment.

Shareholders were also dissatisfied with companies’ efforts to protect their workers from Covid-19. New York City’s pension funds have filed a petition calling on Amazon to be more transparent about the company’s efforts to mitigate health risks from coronavirus. Amazon, which has not yet scheduled its meeting, said that it invested more than $10bn last year to protect workers, among other things.

Some investors have already voted this year for proposals when they felt companies’ transparency over coronavirus efforts was lacking. BlackRock and Vanguard were among shareholders that successfully pushed through a proposal asking meat producer Tyson Foods for greater disclosure on human rights after concerns about workers.

In a statement, Arkansas-based Tyson Foods said it has invested hundreds of millions of dollars in Covid-19 protections for workers and will maintain an open dialogue with investors.

Investors are also scrutinising executive bonuses awarded during the pandemic. Wynn Resorts, Darden and Schlumberger were among the companies that rewrote executives’ bonus plans to make it easier for managers to make their targets. 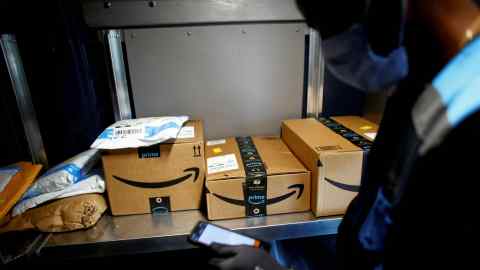 In January, railroad company Norfolk Southern added a discretion to executives’ 2020 bonus plans to ensure they would get paid even as the pandemic badly hit its business.

Many companies tried to gauge investors’ willingness to support rewriting executives’ bonus targets to account for the pandemic, said Donna Anderson, head of corporate governance at T Rowe Price. “They floated that trial balloon, but in the end, not too many companies are trying to do that,” she said. For those companies that did rework bonuses in the middle of a performance period: “They have a little more explaining to do.”

Vanguard this year has already voted against bonus plans at Aramark and Walgreens Boots Alliance. The proposals won 58 per cent and 47 per cent respectively.

At Walgreens, the company’s board added discretion to pay bonuses for the final six months of the three-year compensation performance period — a timeframe that coincided with the pandemic, Vanguard said.

Moral Money is our new weekly newsletter covering sustainable business, finance and investing. Sign up here for breaking news and insightful analysis on this bubbling revolution.