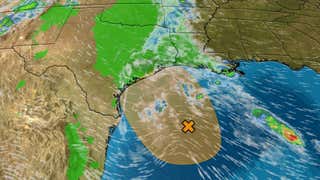 A tropical disturbance in the Gulf of Mexico is being watched for possible development and this system may bring more heavy rainfall to water-logged areas of Texas and Louisiana into this weekend.

An area of low pressure has now formed in the western Gulf of Mexico just over 150 miles east of the South Texas coast. Meteorologists are referring to this as Invest 91L, a term used to identify systems that may develop into a depression or storm.

Despite that, shower and thunderstorm activity near Invest 91L remains rather disorganized, partially due to a tongue of dry air that has wrapped over the system from a swirling upper-level low that spawned the surface low.

If showers and thunderstorms become more numerous near the low-pressure center, a short-lived tropical depression or tropical storm could form before it moves inland over the Texas Gulf Coast tonight.

The National Hurricane Center has assigned a medium risk of development of this system.

Given the hurricane fatigue the Gulf Coast has suffered both in 2020 and in recent years, we want to be clear: we are not expecting a strong tropical storm or hurricane along the Texas or Louisiana Gulf Coast. At most, it would be a tropical depression or low-end tropical storm.

Regardless of whether this system develops, this disturbance could result in more heavy rainfall and flash flooding over parts of southeastern Texas and southwestern Louisiana into this weekend.

The risk of rip currents will also be high through Saturday and coastal flooding is possible from Texas the Mississippi coast.

Much of this region has already experienced heavy rainfall this week and even without tropical development, additional rain and thunderstorms are expected.

The prolonged period of heavy rainfall has been caused by an upper-level low that moved slowly from the Southwest into the Plains earlier in the week. Leftover upper-level energy from that system will continue to tap into a southerly flow of moisture supplied by high pressure in the East, giving rise to the development of additional rounds of rain and thunderstorms through at least Friday, if not Saturday.

On Friday, the threat of more heavy rain and possible flooding will be highest from eastern Texas into southern Louisiana.

Flood watches have been issued by the National Weather Service for parts of those states. This includes Baton Rouge, Beaumont, Lake Charles, New Orleans and Shreveport.

Flash flooding is still a significant threat, especially in areas that have already been hard hit. Do not attempt to drive through a flooded road if you encounter one. The worst decision you can make in a flash flood is driving your vehicle into floodwaters of unknown depth.

Several river gauges in southeast Texas and Louisiana have already risen above major flood stage because of this week’s rainfall.

The areas under flood watches could see at least an inch of additional rainfall. Locally much heavier totals are likely where heavy rain stalls out for hours at a time, but it’s not possible to pinpoint exact locations where that might happen.

There is the potential that some localized spots might pick up 3 inches of additional rain.

Thursday, it was southeast Louisiana’s turn for a soaking.

Bands of heavy rain set up for a second time this week over the Baton Rouge metro area, triggering renewed flooding in parts of East Baton Rouge and Ascension Parishes.

Roads were flooded and closed in several locations, including near Baton Rouge Metro Airport.

Streets were flooded and closed in the Corpus Christi metro area. Water reportedly entered businesses near Corpus Christi International Airport. Up to 8 inches of rain was reported in Nueces County, according to the National Weather Service.

The Lower Rio Grande Valley also was drenched by 3 to 5 inches of rain Wednesday.

Street flooding was reported in McAllen, Harlingen, Brownsville and South Padre Island, trapping vehicles in some areas. Water reportedly entered some homes on the east side of Brownsville around midday Wednesday, according to Cameron County Emergency Management.

Flooding was also reported Wednesday in Kingsville, Laredo and Palacios, Texas. High water forced the shutdown of a four-mile stretch of Interstate 10 west of Sealy, Texas.

Tuesday night, significant flash flooding impacted at least four homes and eight cars in Saline County, Arkansas, or just southwest of Little Rock. A total of 15 people had to be rescued because of flooding in the county.

Other flooding Tuesday or Tuesday night took place in on the west and north sides of the Houston metro, as well as in Victoria and Port Lavaca, where water reportedly entered some homes. Victoria’s over 16 inches of rain this month is not only a May record, but a top five record wet month dating to 1946.

A cluster of thunderstorms stalled over parts of southeast Texas and southwest Louisiana on Monday, dumping up to 18 inches of rain.

The severity of the flooding prompted the National Weather Service to issue a rare flash flood emergency Monday afternoon for the city of Lake Charles and adjacent areas of Calcasieu and Jefferson Davis parishes.

Numerous homes and buildings, including a church and a diner, took on water in Lake Charles, Louisiana, according to the National Weather Service. Vehicles were flooded up to their roofs in some areas.

Lake Charles Airport measured over 12 inches of rain Monday alone, the city’s heaviest calendar-day rain in 41 years, more than rain received during both Hurricanes Laura and Delta in 2020.

Interstate 10 was reported flooded between Beaumont and Hamshire, Texas, according to the NWS. One rain gauge just northeast of Fannett reported over 18 inches of rain.

Significant flash flooding was also reported in Port Arthur, Texas, in Jasper County, Texas, and also parts of the north and east sides of the Houston metro area in near Aldine, Baytown, Conroe and Humble.

If that wasn’t enough, tornadoes were sighted Monday east of Lake Charles near the towns of Iowa, Crowley, and in St. Landry Parish near Pecaniere. Damage was reported in Acadia Parish from an apparent tornado.

A flash flood emergency was issued by the National Weather Service for the southeast Baton Rouge, Louisiana, area overnight Monday night, where up to a foot of rainfall was estimated to have fallen. The flooding prompted water rescues and covered a portion of Interstate 10 to the southeast of the city.

The National Weather Service reported that 100 people had been displaced by flooding on the south side of Natoma, Kansas, following heavy rains Saturday night into early Sunday.

Roads were flooded in parts of the northern Dallas metro area after heavy rain Sunday afternoon. Water rescues were reported in the Richardson area.

4 Components of a Boating Forecast

NY Gov. Cuomo points to a spike in coronavirus cases in Florida as he urges caution in reopening

Ultralight fly rods—what are they good for? | Hatch Magazine