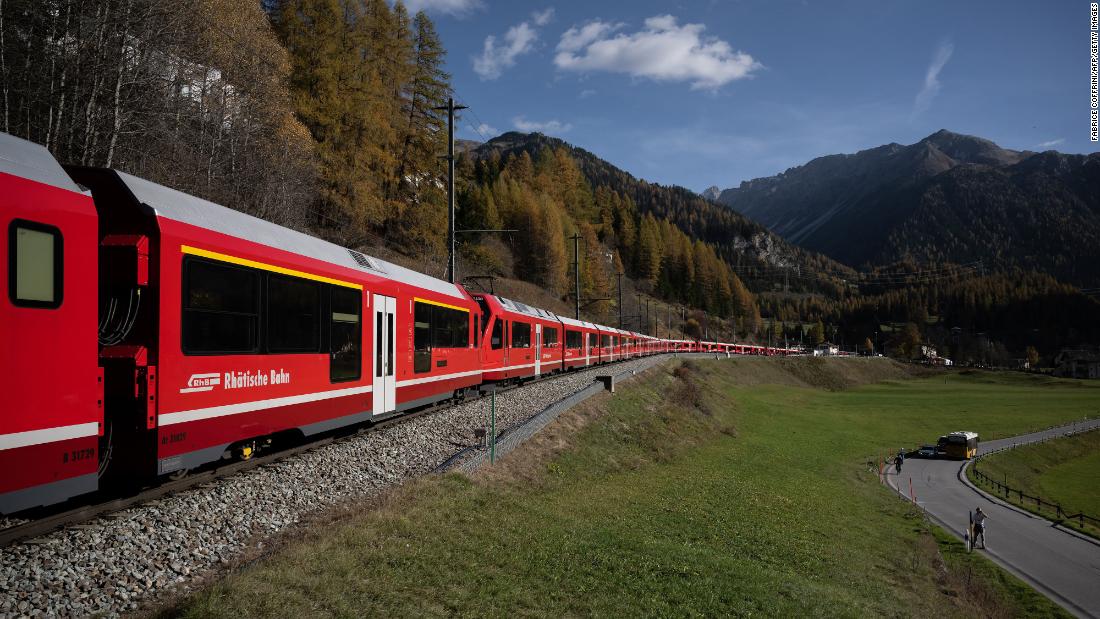 (CNN) — The longest-ever passenger train has launched in Switzerland, a century-old tunnel has opened up under Niagara Falls, a new cheese was crowned the world’s best and a bread sculpture of Harrison Ford has mouths watering in California.

Here’s what happened in travel news this week.

It’s been an outstanding few months for infrastructure fans.

A record-breaking new two-kilometer-long passenger train has just snaked its way along Switzerland’s glorious UNESCO World Heritage Albula Line for the first time. And a huge tunnel buried for more than a century beneath the thundering waters of Niagara Falls is finally open to visitors.
Denmark and Germany are busy building the world’s longest immersed tunnel, 40 meters (131 feet) beneath the Baltic Sea. And a new Metro extension means travelers are about to have an easier route in and out of Washington, DC.

A YouGov survey in 2021 found that 8% of Americans thought they could beat a lion in an unarmed fight, while 15% reckoned they could see off a king cobra.
They could have done with those brave souls in Sydney this week when five lions escaped from a zoo — thankfully with no harm to animals or humans. And while cobras are shy, nonhostile creatures, would-be combatants would do well to bookmark our tips on how to survive a cobra bite.
Vigilance is usually more important than aggression when it comes to facing the challenges of the great outdoors: A missing, injured hiker was rescued in Colorado last month when an eagle-eyed train passenger spotted her from a carriage window.

A Swiss cheese was named the finest in the world by an international panel of judges at the World Cheese Awards on Wednesday. And no, it’s not the Swiss cheese with holes — this one’s a hand-crafted gruyère.
And if you thought there was no way of making ’80s-era Harrison Ford any more delicious, how about crafting him entirely out of bread? A California bakery has created a “Pan Solo” sculpture for a local contest. Incredibly, it’s life-size (or loaf-size, if you prefer).
Of course, the best way to serve a carb-based Han Solo to guests is dipped in olive oil. But before sending out those dinner invites, you’ve got to know the right way to taste the scrumptious liquid fat. In this clip from “Searching for Italy,” Stanley Tucci learns how.

Ultraminimalist packer Brooke Schoenman has worked out how to travel the world with only a small shoulder bag as luggage. Here are some tips from this carry-on queen.
These days, however, many of us are finding that it’s our wallets, not our bags, that are slimmer than we’d like them to be. Here are eight cost-saving tips to help get travelers through these difficult economic times.

Home to more than 1,600 species of fish and some 75% of the world’s known coral species, Indonesia’s Raja Ampat archipelago is credited with having having the richest marine biodiversity on the planet. Here’s why it’s known as the “last paradise on Earth.”

In case you missed it

Here are the macabre origins of the autumn festivities on Guy Fawkes Night.

At Ghibli Park, guests are invited instead to “feel the wind.”

Airplane-bird collisions are so common they have a word for the goo left behind: Snarge.

Now a robotic peregrine falcon is on a mission to end the snarge scourge. Here’s how.

Sleeping better on a long flight

My neck, my back, long-haul knocks them out of whack. Trying to get some decent rest while propped up in a pressurized tube for hours on end is never easy, but there are plenty of accessories — from travel pillows to noise-canceling headphones — that can make the journey less of an ordeal.

Sarah Jessica Parker’s Best Outfits on ‘Sex and the City’