Tottenham will assess the extent of the head injury suffered by Heung-Min Son on Wednesday, after the South Korean was forced off in the Champions League win at Marseille.

Son went off in the first half at the Stade Velodrome after a collision with Chancel Mbemba and looked very wobbly as he left the pitch.

Spurs went on to book their place in the last 16 with a last-gasp 2-1 win as second-half goals from Clement Lenglet and Pierre-Emile Hojbjerg overturned Mbemba’s first-half opener.

But the injury to Son is a worry, especially with the Premier League clash with Liverpool coming up on Super Sunday, while he could have concerns over the forthcoming World Cup.

Assistant head coach Cristian Stellini, standing in for the banned Antonio Conte, said: “In this moment we don’t know. We have to wait for a medical assessment. Sonny feels better now. I saw him in the dressing room, he celebrated with us.

“In this moment we don’t know. We have to wait for a medical assessment and we have to wait until tomorrow. We are not sure if he is concussed. It is Son’s face. His eye is a bit swollen.”

Son’s head injury was not the only setback of its kind as English teams toiled to victory in the Champions League on Tuesday night, as Liverpool’s James Milner also went off with a similar blow in his side’s 2-0 win over Napoli.

The two head injuries took place in the same week in which the PFA has renewed calls for temporary concussion substitutes to be introduced in the game, allowing teams to make an interim substitution whilst checking a player’s head injury away from the pitch, before reversing the switch if the player is fine to continue.

Current regulations, which the PFA describe as “jeopardising player health and safety”, allow only permanent concussion substitutions whereby a team is granted an additional change if a player is forced off with a head injury.

“Permanent substitutions do not allow medical teams to assess a player with a potentially serious brain injury in an appropriate environment,” said Dr Adam White, Head of the PFA’s dedicated Brain Health department.

“The rules as they are create an extremely challenging situation and offer no support to medical personnel.”

UEFA has not integrated the existing permanent concussion substitution rule into major European competitions such as the Champions League, Europa League and Nations League.

Dr White added: “This situation needs to be addressed urgently. As a bare minimum UEFA, as one of football’s major bodies, must lead by example and introduce the available permanent concussion substitution rule. This an issue the PFA will be raising with UEFA directly.”

Antonio Conte’s side reached the Champions League last 16 as Group D winners after a nerve-jangling climax.

The Londoners, who needed only to avoid defeat to go through, endured a first-half siege and trailed to Mbemba’s header in stoppage time before the break. However, Lenglet proved to be Tottenham’s saviour when he headed in his first goal for the club in the 54th minute to level.

Hojbjerg then sealed the victory in stoppage time to put Tottenham top of the group and leave Marseille, who at one stage of the evening sat top, in fourth spot and out of Europe.

Stoppage-time drama for Spurs this season

“To be honest, we expected that type of game. The Stade Velodrome is a very difficult place to deal with and I think we showed great personality,” Lloris said.

“Clement (Lenglet) scored a very important goal in France, in front of the French people. The second goal from Pierre (Hojbjerg) confirmed things for the group. We didn’t play well during the first half. Maybe we didn’t know what would happen if we attack. It wasn’t good for us to play this type of first half.

“We speak in the locker room – we start the second half with much more personality and aggressive. We play a very good second half.

“It was a tough night, a great battle and even more psychological battle because we could feel in the first half a team was playing without the fear to lose, it was Marseille, and in the second half we face a team with the fear to lose.” 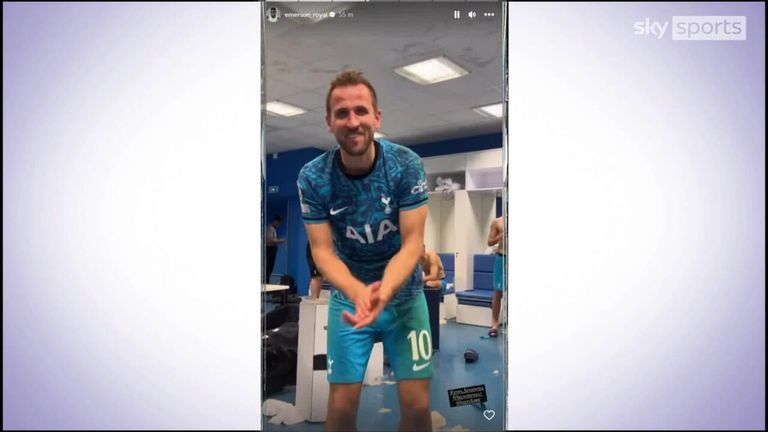 Harry Kane and his Tottenham teammates celebrated their progress in the Champions League with some dancing in the changing room!

Merson: Spurs through but must improve It was a result that barely looked possible in the opening 45 minutes as Spurs appeared dazed and confused by Marseille’s relentless onslaught.

Spurs were a different proposition after the interval and took control after Lenglet’s equaliser. Hojbjerg struck the crossbar for the visitors but Marseille should have scored late on when Sead Kolasinac somehow missed an open goal with a header.

Sky Sports pundit Paul Merson believes Tottenham will have to improve if they are to progress any further in the competition having reached the last-16 stage. 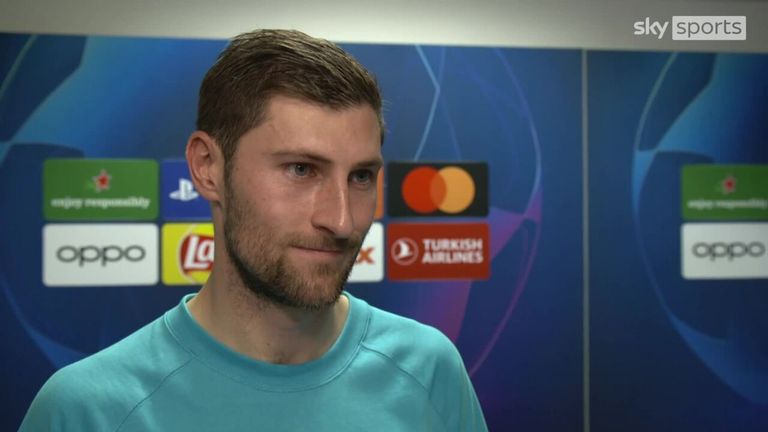 “Spurs couldn’t put three passes together in the first half,” Merson told Soccer Special. “As soon as they started putting more passes together the game opened up for them and they were a threat. They managed the game well.

“Tottenham did very well in the second half but when you get to the last 16 you can’t keep giving teams head starts. It will catch up with you sooner than later.

“When the shackles are off and the fear factor goes out of the game, Spurs have some good players who can move the ball about very quickly. But they don’t do that, they sit back. Kane was literally 35 yards from his own goal in the first half. They didn’t have an outlet; they’ve got to take a chance sometimes. It’s too negative for me.

“You can’t keep giving teams head starts. They’ve been fortunate in a couple of games like Bournemouth on Saturday and again today against an average team in Marseille.”

‘Conte is very tired – he lived the game in the crowd’

Spurs’ place in the last 16 was not guaranteed until Hojbjerg won it with the last kick of the game to seal top spot in Group D.

With Marseille needing a win to go through and a defeat knocking Spurs out, it was an evening of jeopardy for the Premier League side in a hostile environment in Provence.

Conte, who celebrates one year in charge on Wednesday, was forced to watch from the stands due to his red card after the VAR controversy against Sporting Lisbon last week, which meant Tottenham’s qualification fate went down to the final game.

And the Italian was put through the wringer as his side produced a listless first-half performance, deservedly falling behind to Mbemba’s header.

The second half was a different story, though, and Lenglet put Spurs back in control with a header of his own in the 54th minute.

But with Marseille needing just one goal to send them out, it was a nervy evening until Hojbjerg’s late intervention. And it was not an evening Conte enjoyed. 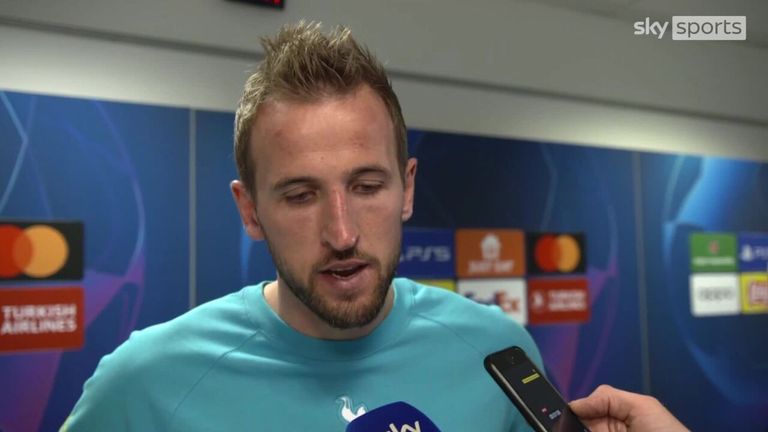 Stellini added: “I had the possibility to talk with Antonio. He was very tired. He lived the game in the crowd, it’s not normal. Maybe he spent more energy in the stands than he normally spends on the touchline.

“It was very difficult the first half. In the difficulties, we didn’t lose our minds. We stayed in the match. It was terrible the goal we conceded because from a corner they took it quickly and we were not prepared. 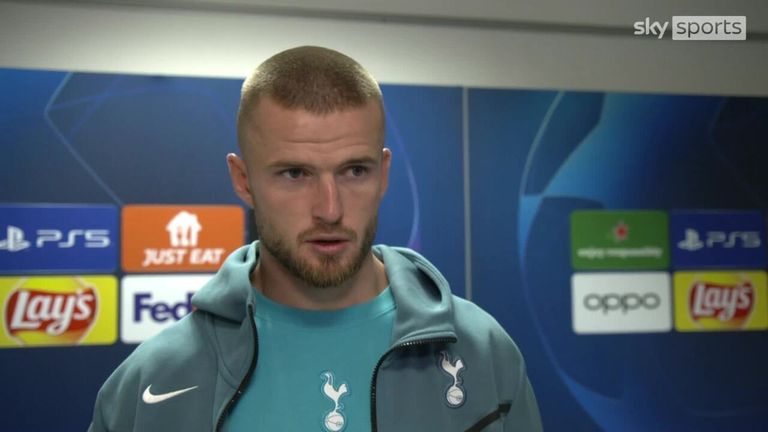 Tottenham defender Eric Dier says it was a new experience not to have his manager, Antonio Conte on the touchline during their 2-1 Champions League win in Marseille

“The stadium was very hot in the first half and sometimes it is normal to give the possibility to the opponent to play, to use the energy you have in the second half. It could also be a strategy. We need to try to play all the 90 minutes in the same level.”

Which teams are already through to the last 16?

Tottenham have three more fixtures ahead of the World Cup. They face Liverpool on Super Sunday this weekend, live on Sky Sports from 4pm; kick-off 4.30pm. They will then face Nottingham Forest in the Carabao Cup on Wednesday November 9 before their final Premier League match against Leeds on Saturday November 12; kick-off 3pm.

Marseille have two further Ligue 1 fixtures ahead of the break – they face Lyon on Sunday before a trip to Monaco on Sunday November 13.

The draw for the last 16 of the Champions League will be held at 11am on Monday, November 7, at the House of European Football at UEFA headquarters in Switzerland.