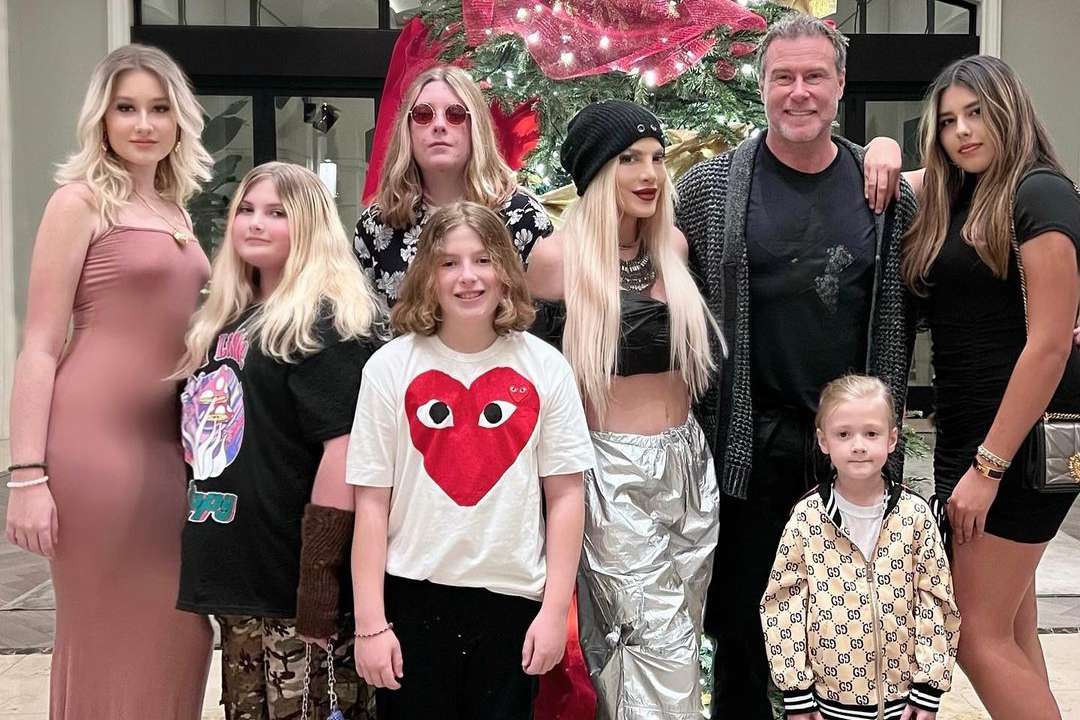 On Monday, the 9021OMG podcast host, 49, shared a photo on Instagram of her whole family posing together, each showcasing their unique style as they came together in front of a Christmas tree at the Park Hyatt Aviara Resort in San Diego.

“New Year 2023 ❤️… About last night. Celebrated as a family. Just missing @thejackmonty,” she captioned the shot, which showed Spelling and husband Dean McDermott posing with their five kids.

The family was also joined by McDermott’s ex-wife Mary Jo Eustace‘s 17-year-old daughter, Lola Eustace, who has been living with the McDermott’s in recent weeks.


The actress first revealed that she welcomed Lola into her home on an episode of Bethenny Frankel’s ReWives podcast, sharing that her home is a “big blended family right now.”

“It’s currently the Christmas season, and I have seven kids right now,” she explained. “Because we have his ex’s [Mary Jo] two kids with us so one from his past marriage, my stepson, and then her daughter living with us.”

A representative for Mary Jo did not immediately respond to PEOPLE’s request for comment.

While she didn’t explain the reason behind the new living arrangement, she referred to her blended family as “the more, the merrier.”

Dean was married to Mary Jo from 1993 to 2006, when they welcomed their son Jack, 24. After their marriage ended, Mary Jo adopted her daughter Lola, while Dean married Spelling three months after his divorce from Mary Jo was finalized.

News of Dean, 56, and Spelling’s extended family living together under one roof comes shortly after Mary Jo’s son Jack called out the Canadian actress, 60, in a lengthy Instagram for spreading “information about my Dad, Step mom and my siblings” on the former couple’s podcast Ex’s & Uh-Ohs.

Although Mary Jo expressed in a 2019 episode of the podcast that the blended family had mended their relationship, a source close to her told PEOPLE shortly after Jack’s post: “I’m sure it’s very hurtful for Mary Jo to hear that her son is talking negatively about her.”

The source continued: “It was Mary Jo that did 90 percent of the parenting and has been a loving and consistent parent. With that said, she respects Jack’s right to express himself. And always will.”

The Best Pre-Wedding Dress Ideas You Didn’t Think Of