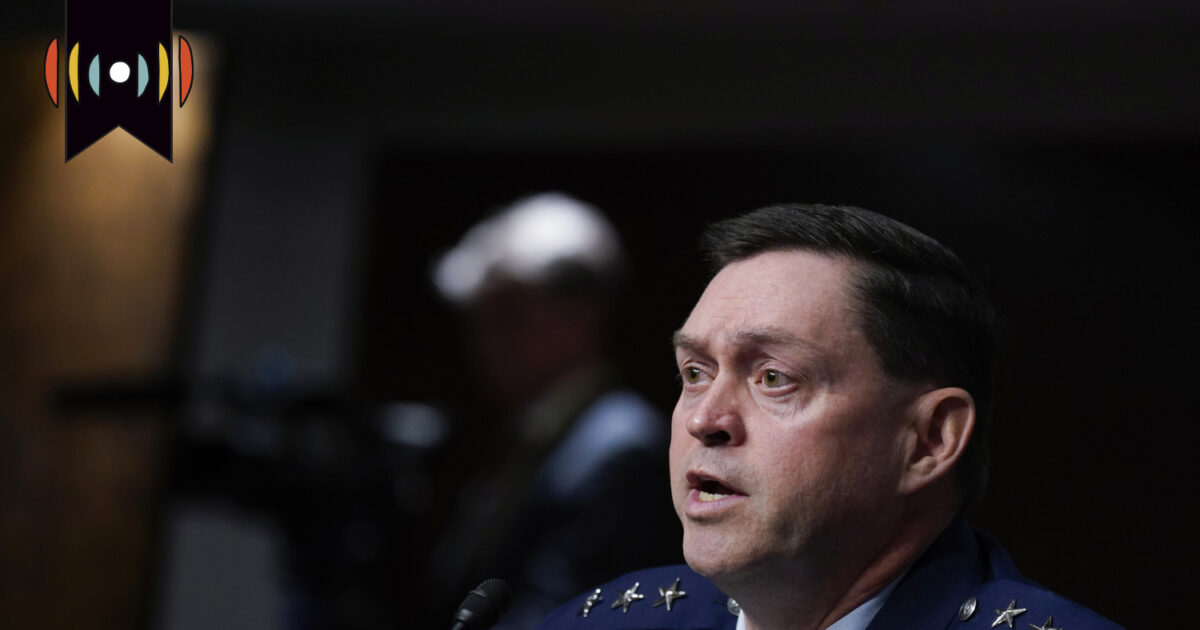 A military orchestra at a ceremony at Andrews Air Force Base on Wednesday as America’s newest military branch welcomed a new commander.

Gen. Chance Saltzman is now the leader of the United States Space Force.

SALTZMAN: A resilient, ready, and combat-capable Space Force is indispensable to deterrence today, tomorrow, and every day after that.

AUSTIN: The People’s Republic of China is the only competitor with the intent to reshape the international order, and increasingly, the power to do it.

And Joint Chiefs of Staff Chairman Gen. Mark Milley said the objective of building and strengthening the Space Force is peace through strength.

MILLEY: It’s to make sure that we are the dominant power. We are the power that has the most capable space force in order to do a single thing, and that is to prevent great power war.

Saltzman is stepping up as Gen. Jay Raymond, the first leader of the nearly three-year-old service, is retiring.

Russia grain » Moscow says it’s not pulling out of a wartime grain shipping deal after all. WORLD’s Kristen Flavin has more.

KRISTEN FLAVIN, REPORTER: Vladimir Putin warned that Moscow reserves the right to withdraw from the deal at any time, but for now, Ukrainian grain and other commodities will continue to reach world markets.

Putin praised Turkey’s diplomatic efforts to get the deal back on track … As well as Turkish President Recep Tayyip Erdogan’s—quote—“neutrality in the conflict as a whole.”

The July wartime grain agreement brought down global food prices about 15% from their peak in March.

Russia claims Ukraine agreed not to use a Black Sea shipping lane for military purposes, but violated that agreement with a weekend attack.

U.N. officials say the lane is not a safe zone when no commercial ships are present.

NoKo Russia shells » The White House says North Korea is secretly shipping artillery shells to Russia to use against Ukraine.

KIRBY: Our information indicates that they’re trying to obscure the method of supply by funneling them through other countries in the Middle East and North Africa.

He described the size of the shipments as significant, but nothing that is likely to turn the tide of the war.

KIRBY: We of course condemn these missile launches and the DPRK’s reckless decision to fire a missile below the de facto maritime boundary with the Republic of Korea.

The North fired more than 20 missiles, at least one of them in the direction of a South Korean island. That forced residents to take cover in underground shelters.

The missile landed near the rivals’ tense sea border. South Korea quickly responded by launching its own missiles in the same border area.

The launches came hours after Pyongyang threatened a nuclear attack in response to joint U.S. and South Korean military drills.

Fed meeting » Federal Reserve Chairman Jerome Powell says interest rates are going up once again. The Fed bumped up its benchmark rate Wednesday by three-quarters of a point for a fourth straight time.

It’s all part of an effort to curb high inflation. But Powell said at some point, the Fed will ease up on the rate hikes.

POWELL: That time is coming, and it may come as soon as the next meeting or the one after that. No decision has been made.

JOSH SCHUMACHER, REPORTER: The count, including nearly a half-million absentee ballots, should be complete today. Officials had counted 90% of the ballots as of Wednesday. And it appeared a Netanyahu-led alliance will have at least the 61 votes needed in Parliament to form a government. But Netanyahu did not declare victory.

He is already Israel’s longest-serving prime minister ever with a total of 15 years in office, most recently from 2009 to 2021.

CVS and Walgreens would pay $5 billion each to end a years-long legal battle.

LYNCH: I definitely would say that we’ve made significant investments over the years to combat the opioid crisis and continue to do so.

Governments claimed pharmacies filled prescriptions they should have flagged as inappropriate.