Is fashion sliding backwards when it comes to size inclusivity? 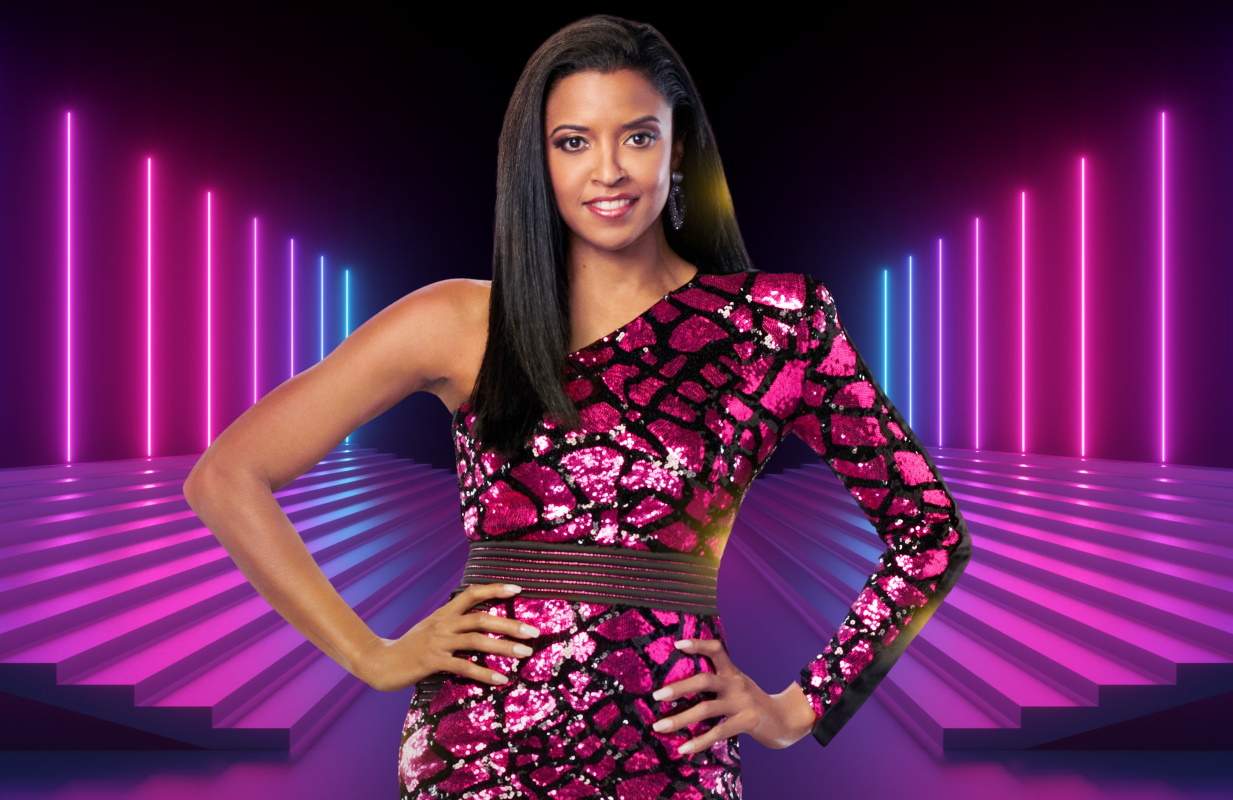 Move over Posh Spice, Wickie Roy (Renée Elise Goldsberry) is back on the scene. While the resident diva of Peacock’s Girls5eva has yet to truly find her way back into the cultural zeigeist, her closet is never anything less than pop star worthy, a testament to costume designer Tina Nigro and the show’s persistent commitment to the bit.

Before Wickie unleashes her Season 2 “album mode” attire, here’s a look back at her very best looks to date. 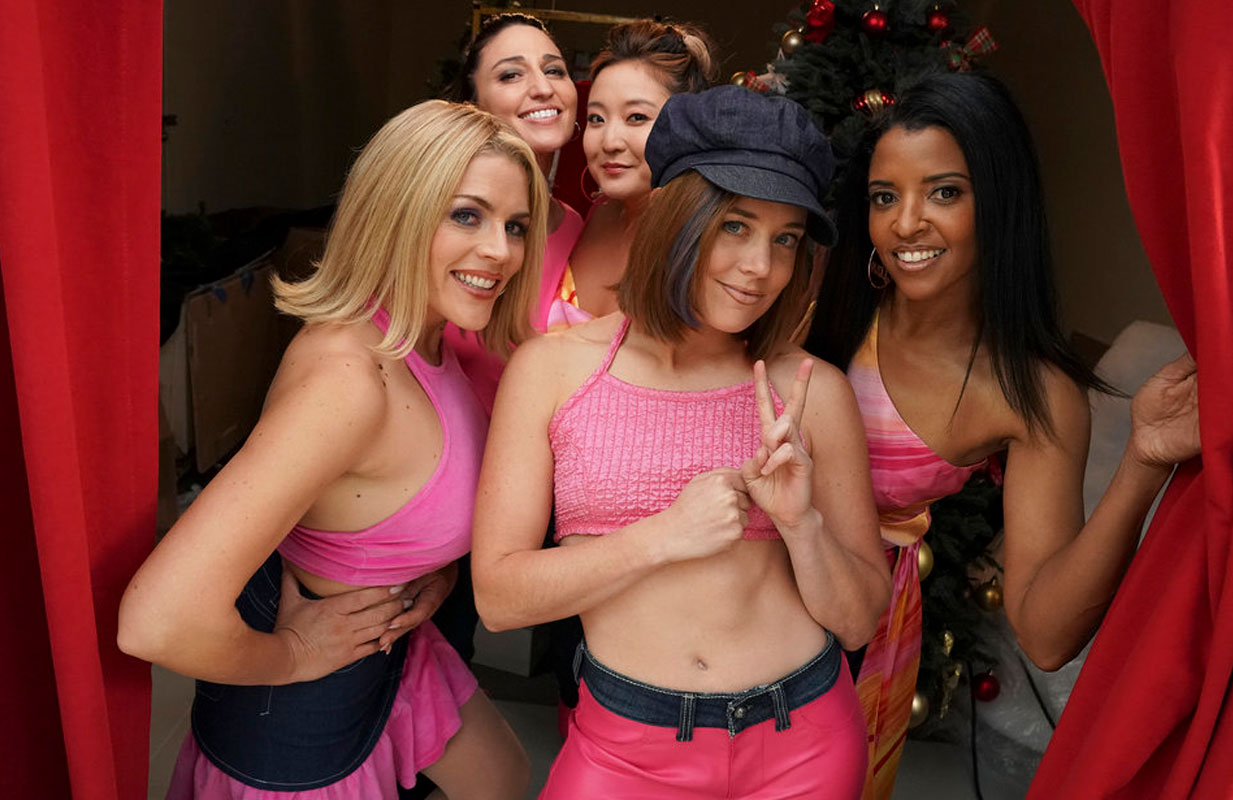 Coordinated attire is intrinsic to the pop group aesthetic, and Girls5eva leans heavily into an overtly girlish color palette while adding denim to every look possible. The latter recalls Irish group B*Witched, but there’s also a good dose of Destiny’s Child, En Vogue, and the Spice Girls in flashbacks to their brief brush with early Aughts fame.

Each woman has her own style persona, and Wickie’s features a healthy amount of animal print. One coat might have some Drag Race fans yelling,”Brown Cow! Stunning!” — even if this print is black and white. Wickie is the most trend-driven (Busy Philipps’ Summer is a close second), with her large vintage closet stuffed with Y2K offerings that are still being used in the present. 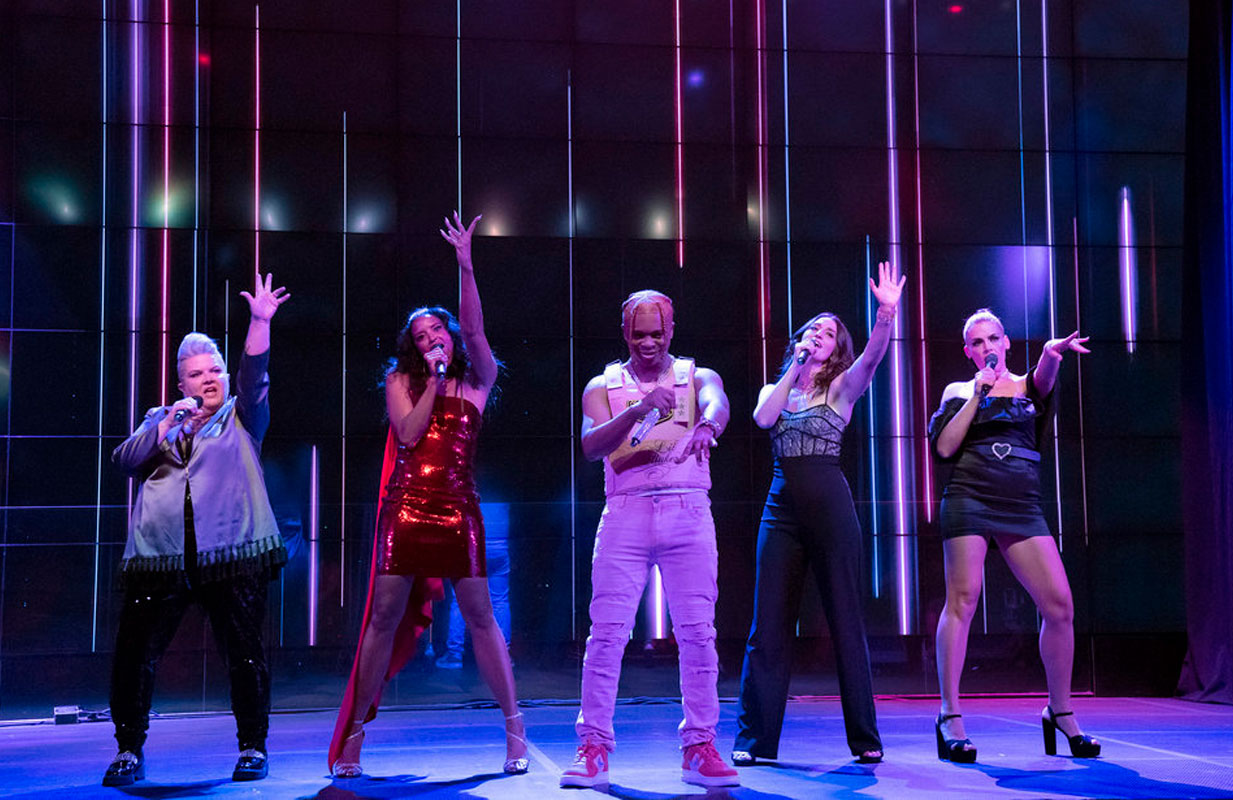 Two decades ago, Wickie adhered to the matchy-matchy plan even if she always made sure she stood out among her bandmates. When they reunite for the first time in years on The Tonight Show with Jimmy Fallon, she ignores the black attire memo and opts for a focus-pulling Saint Laurent scarlet sequin one-shoulder mini dress.

If that wasn’t enough, the red scarf-turned-cape adds to the starry effect. Everything about this high-end designer look gives the impression she is flying as high as her Instagram posts suggest. But looks can be deceiving, and it won’t be long before Wickie drinks the contents of her Victoria’s Secret water bra so she can board her flight. 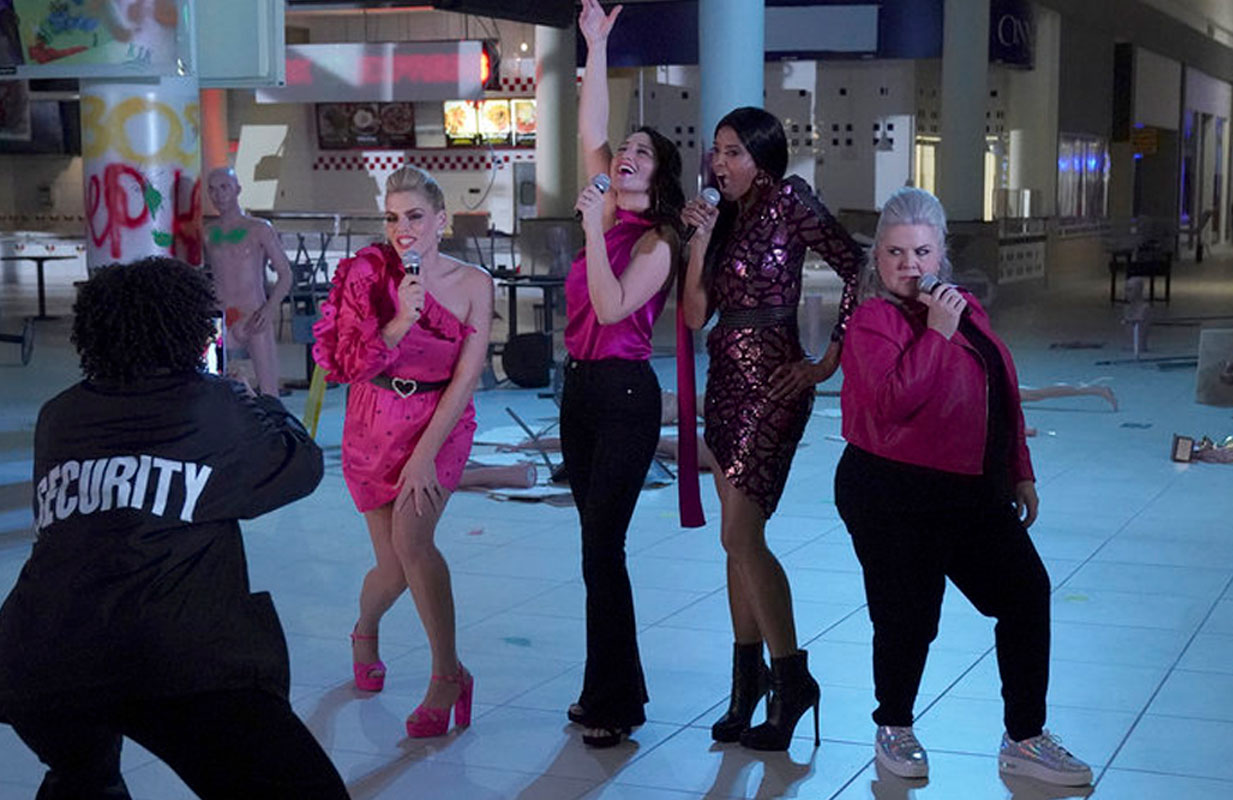 Girl-next-door Dawn (Sara Bareilles) correctly deduces that Wickie’s life is not as gilded as her social media updates would have everyone to believe. Their conversation in the pilot episode helps clear the air, and Wickie’s back to being a team player… well, almost a team player as her Zhivago leg-baring sequin frock is in the same color family as the hot pink worn by Dawn, Summer, and Gloria (Paula Pell). It’s close enough while still ensuring the spotlight is on her — sky-high stilettos also give her an edge. 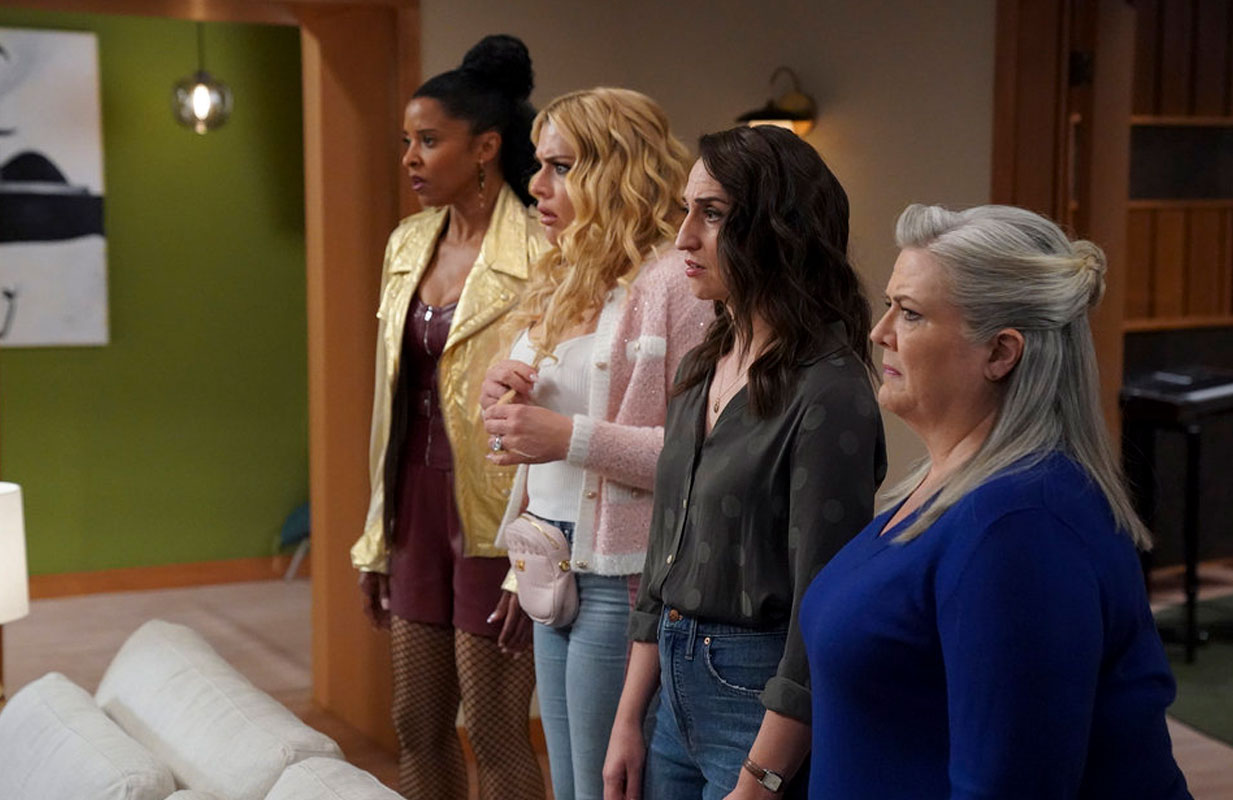 Speaking of stacked heels, the $3000 pair of boots in the show’s third episode delivered one of the best visual gags of the series when Wickie was forced to scoot up a ramp on her butt “like a toddler” because her shoes are impossible to walk in. When she gets a heel stuck in the Duane Reade escalator, she uses a Coke bottle as a replacement. Some might call this ridiculous, but it has all the makings of a YouTube-ready life-hack tutorial.

The boots in question are paired with fishnets, burgundy leather shorts, and a 2012 Marc Jacobs gold biker jacket that Nigro says is one example of the cash-strapped Wickie using pieces from her past in her present-day look. Everything old is new again in both fashion and pop music. 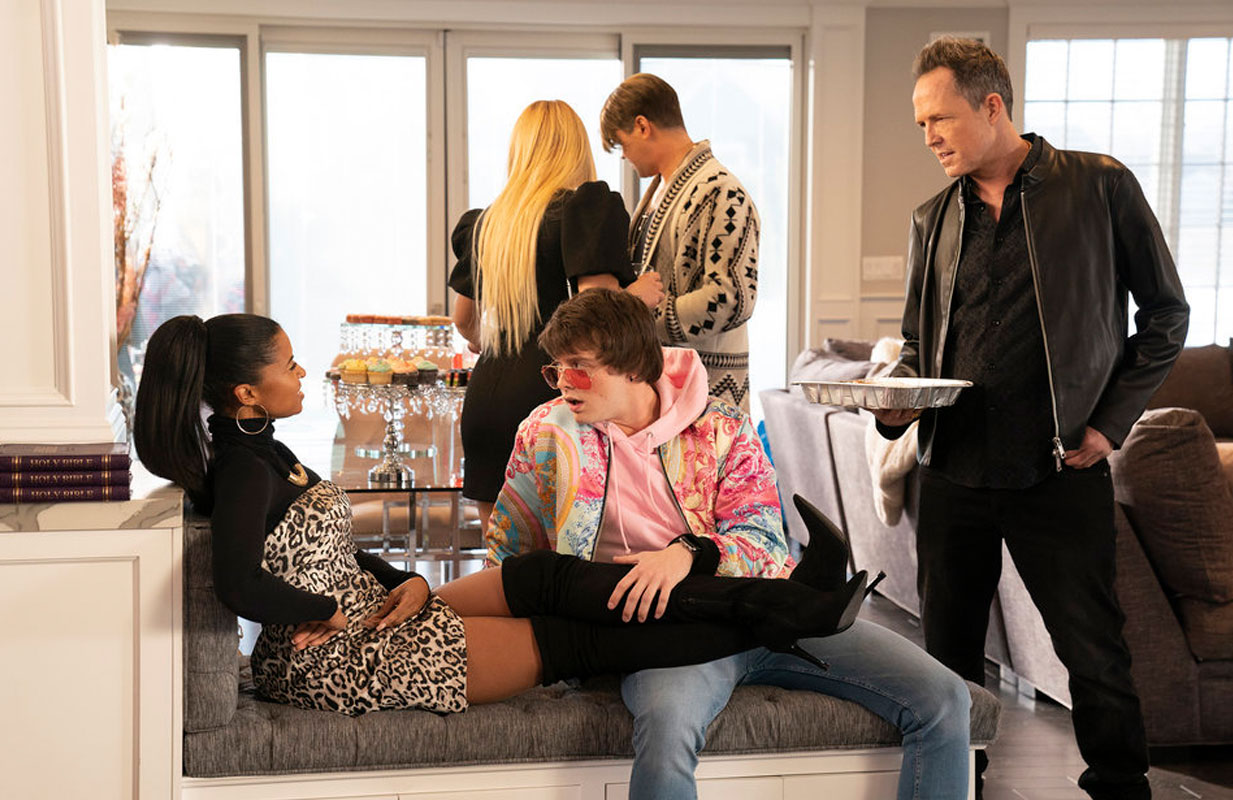 How do you dress for a church event hosted at your bandmates’ mansion? By pairing a sensible black turtleneck with a metallic leopard print strapless frock, that’s how. Throw on some thigh-high boots to complete the demure-ish look while also clashing with the TikTok star you discover is pranking you. It turns out Wickie really does have an animal print for every occasion. 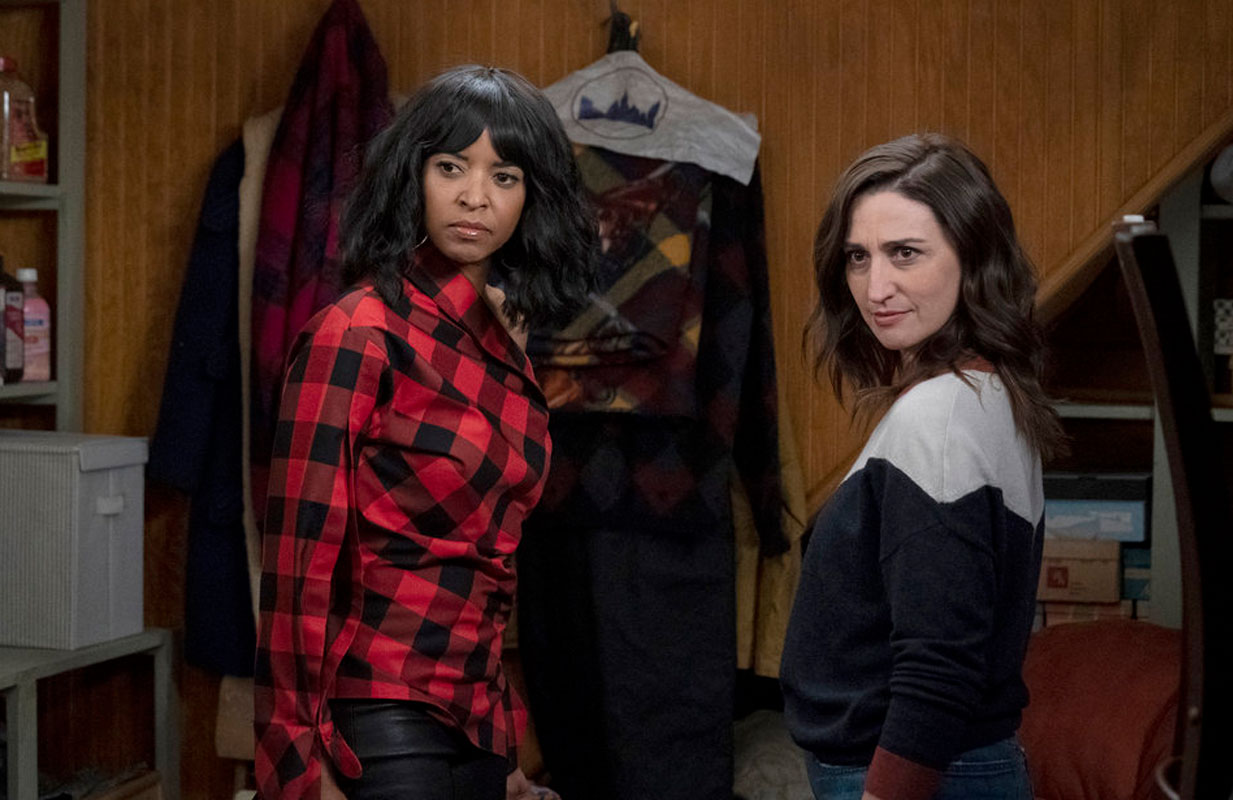 Dressing for the countryside doesn’t mean compromising your signature style and Wickie’s serves lumberjack chic in a Buffalo check asymmetric off-the-shoulder Hellesey blouse. You can take the girl out of the city, but she’ll still wear leather trousers and inappropriately high heels in rural terrain. 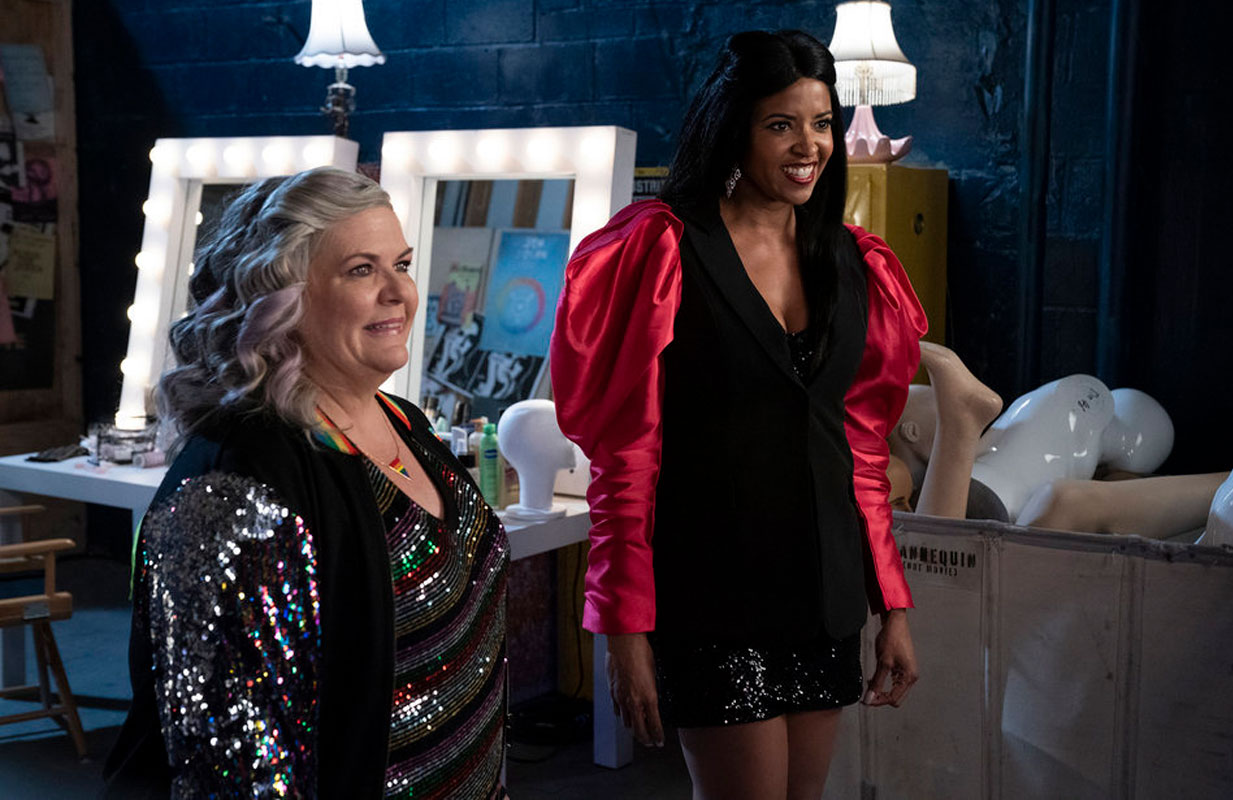 One of the best episodes of 2021 also features some of Wickie’s most opulent puffed diva sleeves, which go full leg-of-mutton for the Pride event. Teaming this with black sequins conjures images of Liza and Cher, and it is here she that finds out she is a gay icon. Not only that, but she has a monetized catchphrase from her brief stint on stage in Maskical! The Musical. Bonus sartorial shout-out goes to Nigro’s hot-pants take on the iconic Jim Carey yellow suit. 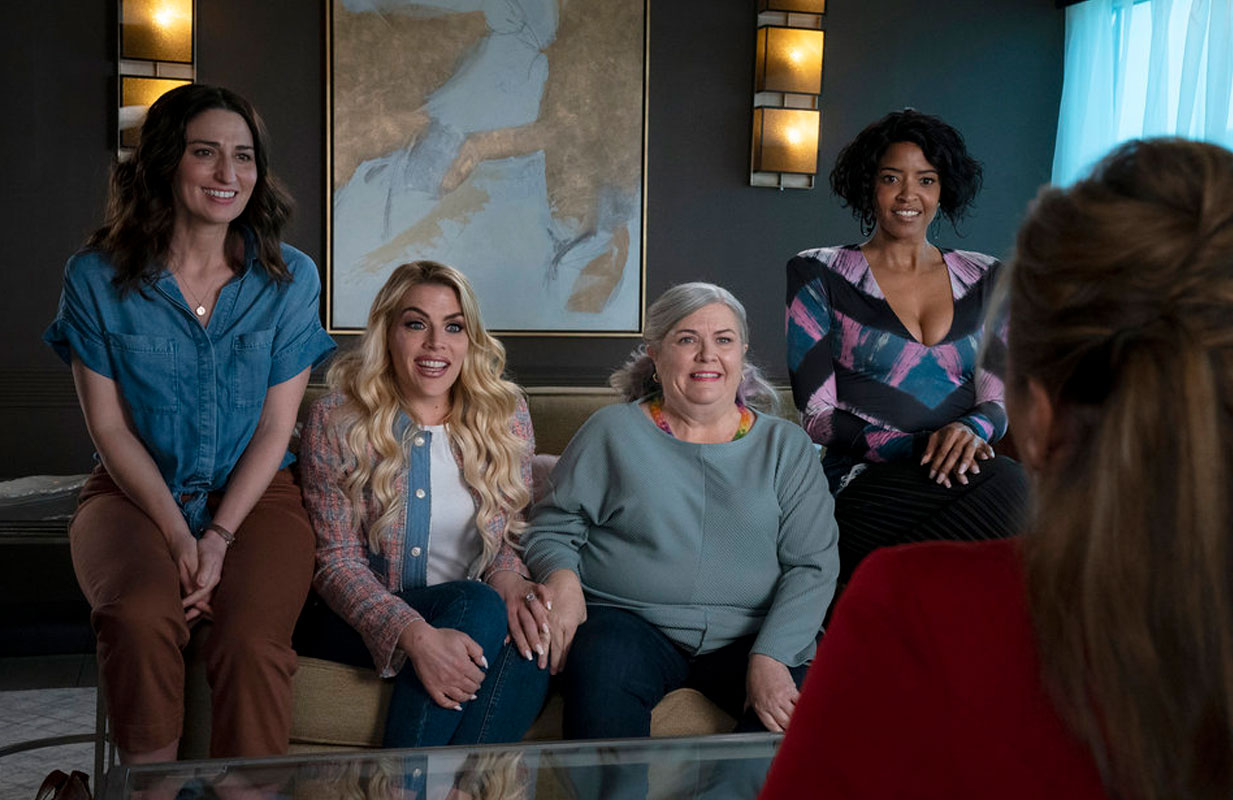 Sure, you won’t see the lawyers on The Good Fight or The Morning Show hosts diving into their tie-dye bodysuit collection for an off-books business meeting outfit. Still, Wickie’s approach to corporate casual dressing embodies a bold pattern approach. Think ‘80s athleisure with a Girlboss twist. Wickie changes her hair as often as her clothes, and this shorter ‘do is one of her more understated cuts to match the daytime setting. 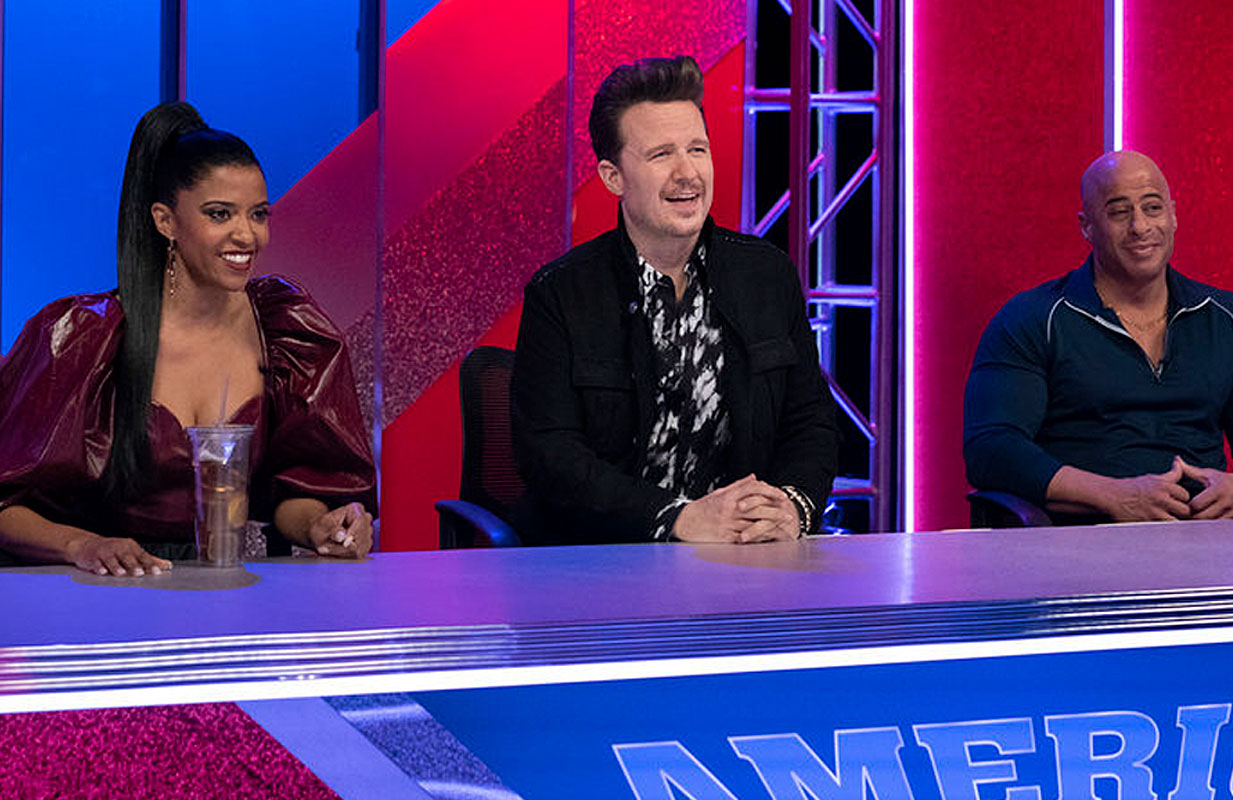 Anyone who watches reality competition shows will know that if you’re sitting behind a desk, then the top of your outfit needs to sing. Call it the Zoom effect on fashion, but there is always the chance that you might have to rise to your feet so you cannot slack on the bottom half. Her fondness for attention-grabbing shoulders boosts Wickie’s stint on American Warrior Singer, and this faux leather puff sleeve top is an instant winner. 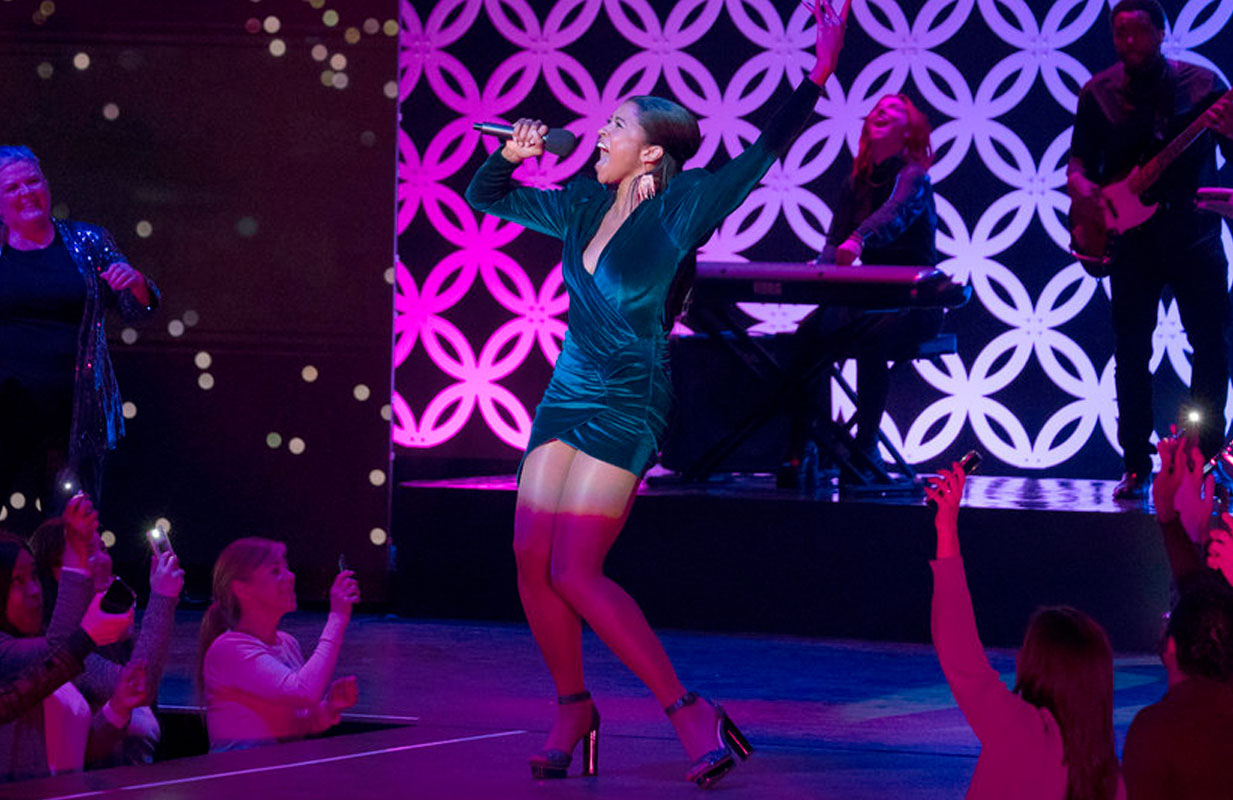 It’s time for the Jingle Ball, and nothing says the festive season quite like velvet. Wickie ditches hosting stability and instead chooses to embrace the girl group’s uncertain future with a performance of their new song, “4 Stars.” Sky-high heels and a mini dress are Wickie’s armor — popularity is fleeting, but Wickie’s sartorial impact is 5eva.

Girls5eva returns for its second season on Peacock May 5, 2022. New episodes drop Thursdays through June 9th.

People are talking about Girls5eva in our forums. Join the conversation.

Emma Fraser has wanted to write about TV since she first watched My So-Called Life in the mid-90s, finally getting her wish over a decade later. Follow her on Twitter at @frazbelina.

Is fashion sliding backwards when it comes to size inclusivity?

Three Things to Consider Before Buying a Cordless Pole Pruner