In 2020, football is one of the most influential forces in all of streetwear. Whether its your team’s latest kit drop being styled as a streetwear essential, the game’s biggest clubs collaborating with the culture’s waviest brands, or ballers themselves styling limited-edition capsule collections – the beautiful game is shaping fashion as we know it right now.

While the traditional kit release cycle has been disrupted by COVID-19, some projects in this space are still breaking through, including Marcelo’s recent link up with NorBlack NorWhite and Budweiser on a sick one-of-one bomber jacket. It’s a shining example of how the game’s current generation of ballers are breaking new ground on and off the pitch.

With a wave of new products set to drop ahead of the 2020/21 season, we dug through the archive and compiled a list of the 10 waviest football x streetwear collaborations we’ve seen so far.

Mriga Kapadiya and Amrit Kumar are the Toronto-born, Delhi-based designers behind NorBlack NorWhite, a burgeoning fashion label that linked up with legendary Real Madrid left back Marcelo to produce a hard, limited-edition statement piece for a player who isn’t afraid to rock colourful fits. Known for his colourful fits, NorBlack NorWhite took to task on creating Marcelo a bespoke bomber jacket influenced by his life story – and it bangs. Dressed in striking silver, the custom NBNW piece fuses football and fashion motifs on a unique design fitting for the Brazil baller. 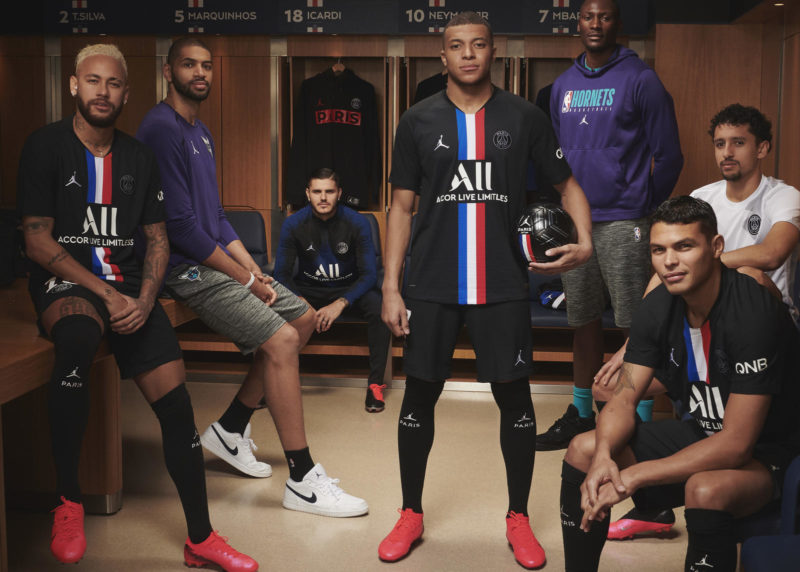 Jordan’s collab with PSG was an era-defining move for both club and brand, solidifying the Parisian’s status as streetwear’s go-to club. Since officially announcing the partnership back in 2018 – which sees the traditionally-basketball brand provide PSG with two kits per season, in addition to lifestyle wear – the pair’s offerings have gone from strength to strength. Their link up is established as the most consistently wavey in world football. No one does club merch better than PSG. 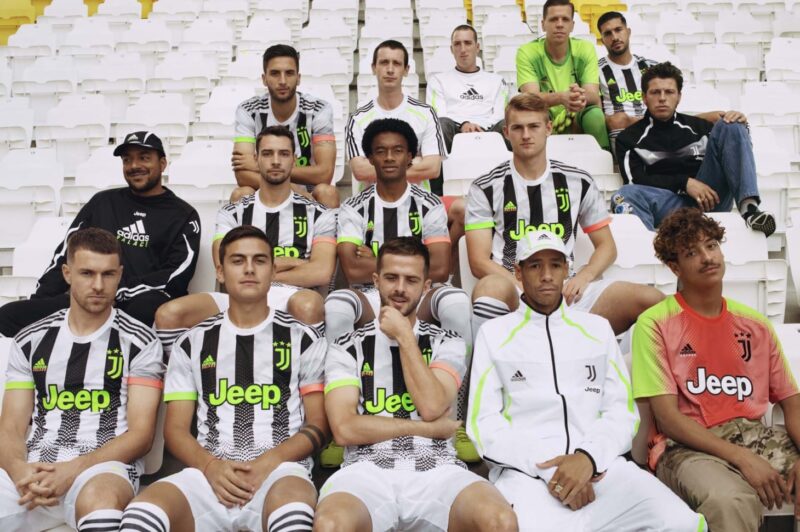 After seeing the success of Jordan and PSG’s partnership, adidas knew they needed to drop a clinic in the collab game. After a few rumours emerged earlier in 2019, the Juve 4th kit for 19-20 dropped out of nowhere, with CR7 and co. donning the cold adidas x Palace x Juve jersey on-pitch before a wider roll out of the head-turning range. With Juve firmly established as one of the most forward-looking clubs in Serie A off the field – equipped with a bold new logo, which served as the apex of their own in-house fashion line – the collab brought Palace’s love for bright colours and vibrant aesthetics to the football pitch for the first time. The collection sold out so fast that we expect another drop in 2020/21. 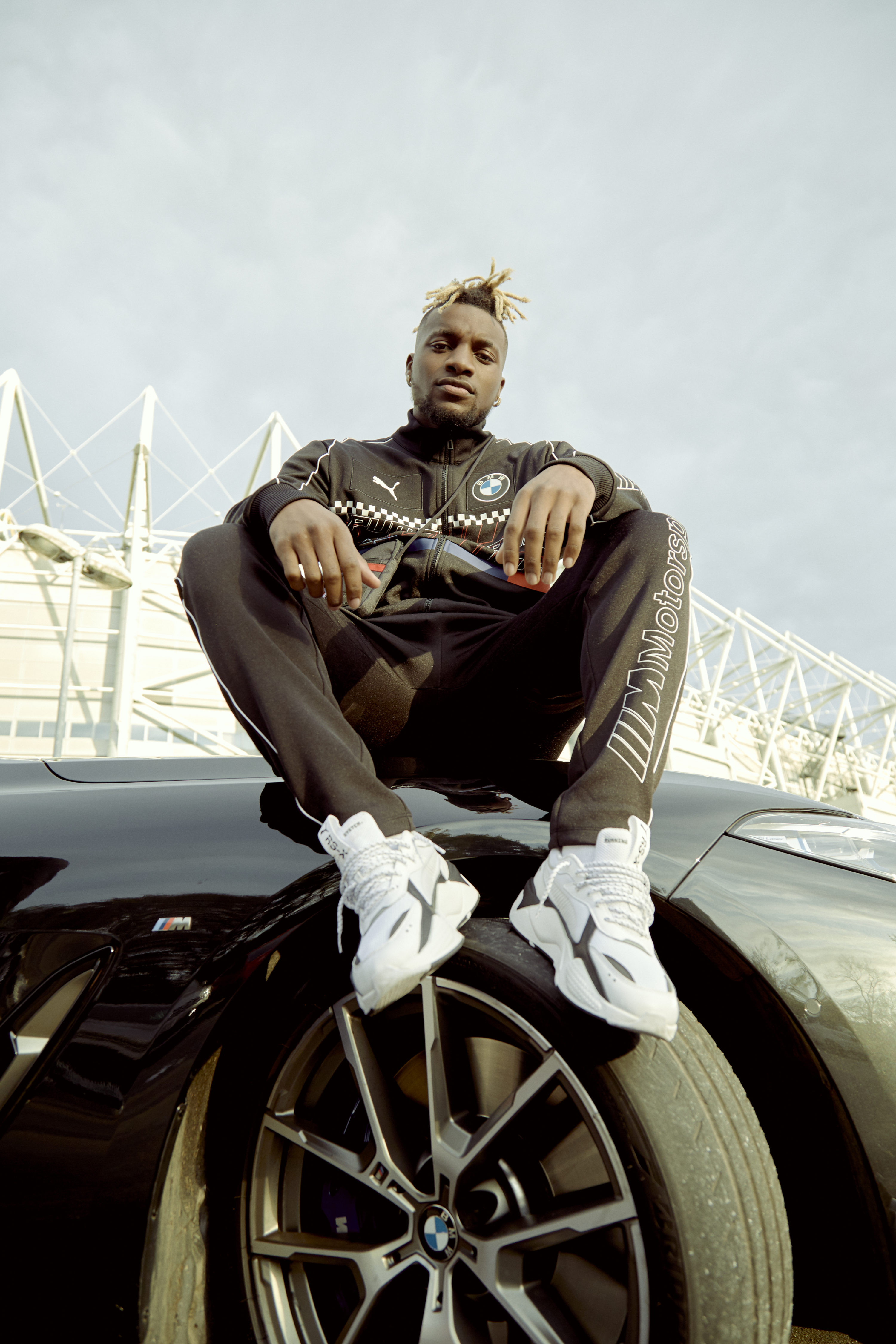 PUMA Motorsport has been an authentic part of racing culture by partnering with some of the most iconic drivers and teams on the planet, so it was only right that they linked up with one of the fastest – and drippiest – players in the Prem to launch their latest capsule collection in Allan Saint-Maximin.

The cold range featured racing decals, BMW insignia and chequered flag detailing to bring the track to the street across outerwear, tracksuits, t-shirts and sneakers. With Saint-Maximin giving this one his seal of approval, you know it’s certified heat. 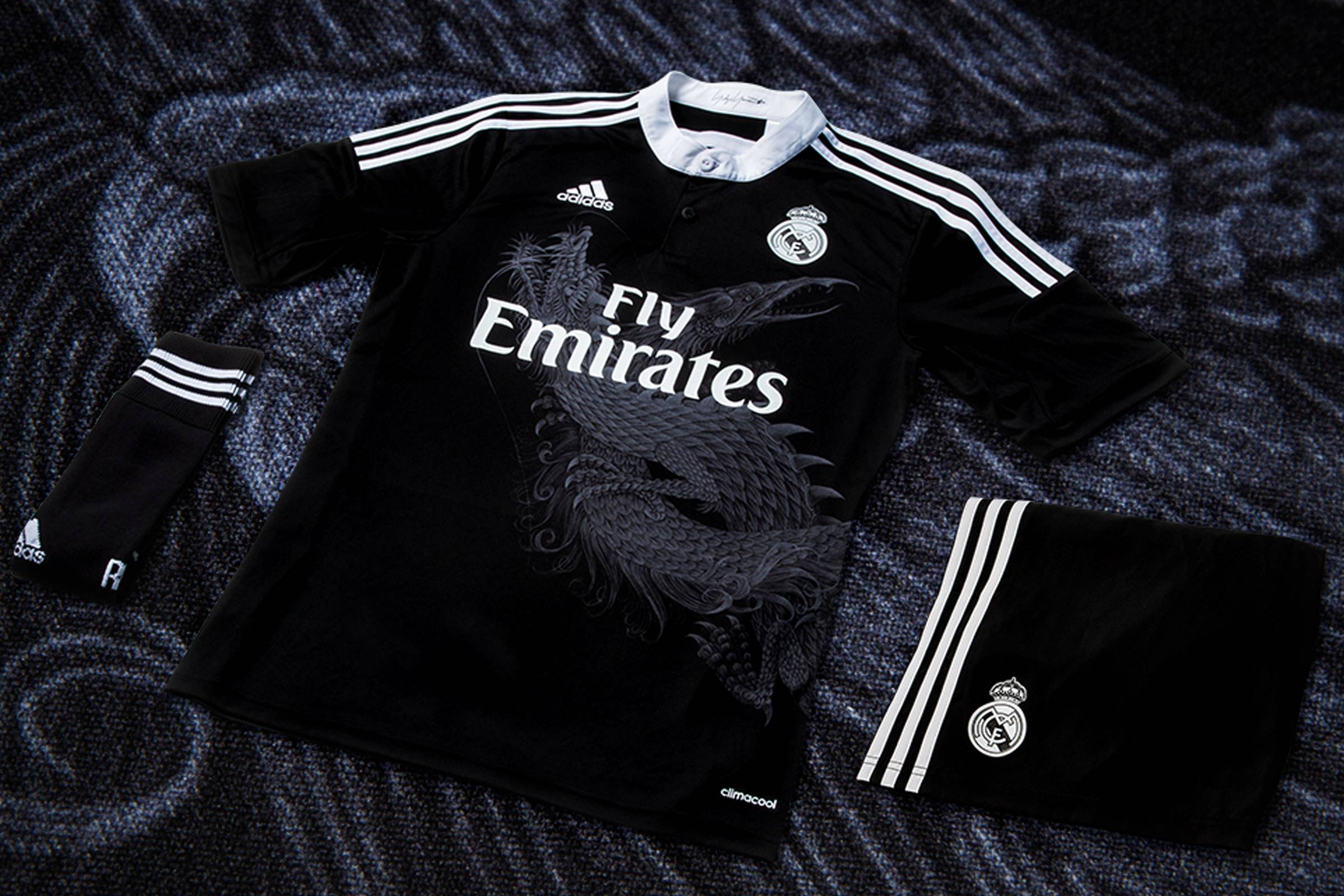 Yohji Yamamoto is one of the most esteemed names in menswear, with the Japanese fashion designer linking up with Spanish giants Real Madrid back in the 2014-15 season for one of the cleanest kits of all time. The detailing on the adidas third shirt is crazy, featuring a dragon motif across the chest on top of the clean monochrome colourway. Clean cut cult classic. 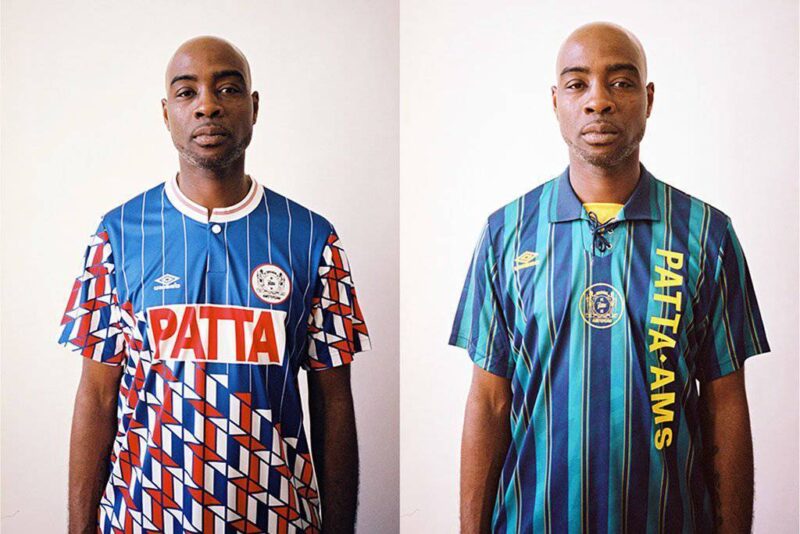 Patta’s love affair with the beautiful game is well-documented, with the Amsterdam imprint serving up a host of cold football jersey designs down the years. The best of the bunch is undoubtedly their work with Umbro, with the shirt influenced from classics in the Ajax archive from the 90-91 season for their 2017 partnership. Packed with personality and popping with colour, Patta and Umbro’s collab shirts always go hard, and the pair haven’t missed once. 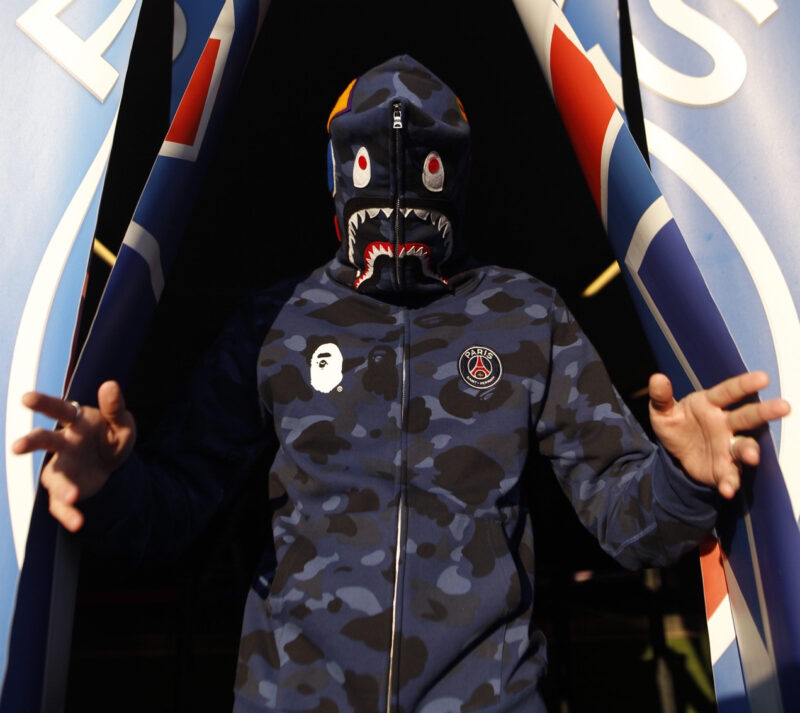 Paris Saint-Germain have a string of collaborations with world-renowned brands under their belt, and their partnership with renowned Japanese clothing brand A Bathing Ape was one of the biggest drops they’ve released to date.

The super-limited capsule collection featured a hoodie, (complete with full zip-over hood), blue camo shorts, a draw-string bag, several T-shirts and a long down jacket which all feature BAPE and Paris-Saint Germain co-branding, and was undoubtedly one of the most hype-heavy releases of 2018. 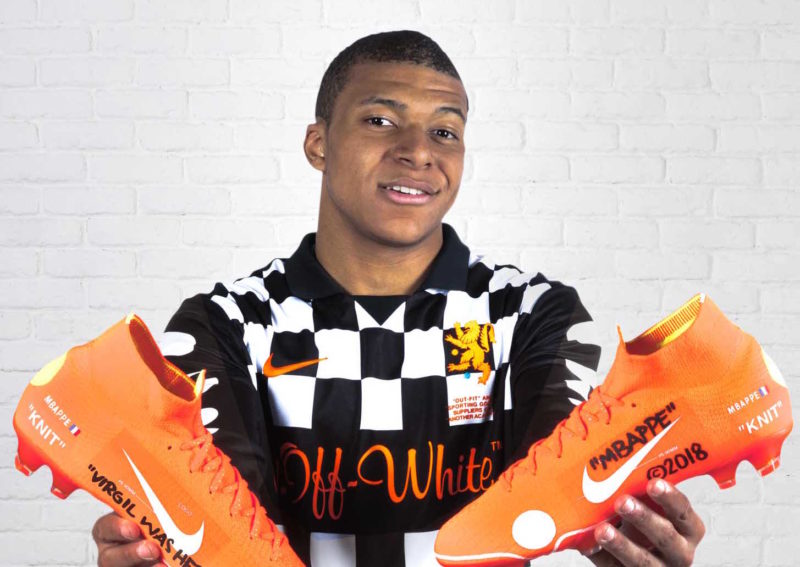 Virgil Abloh pulled no punches when delivering Nike and Off-White’s football-themed capsule collection back in 2018. With a strong love for the game (and a World Cup right round the corner) Abloh took the opportunity to blend memories of his kicking ball growing up with the strong branding seen on European football shirts. Referencing vintage Dortmund, Croatia and Holland motifs from vintage kits down the years, the hype-heavy shirt remains a grail for fans all over the world. 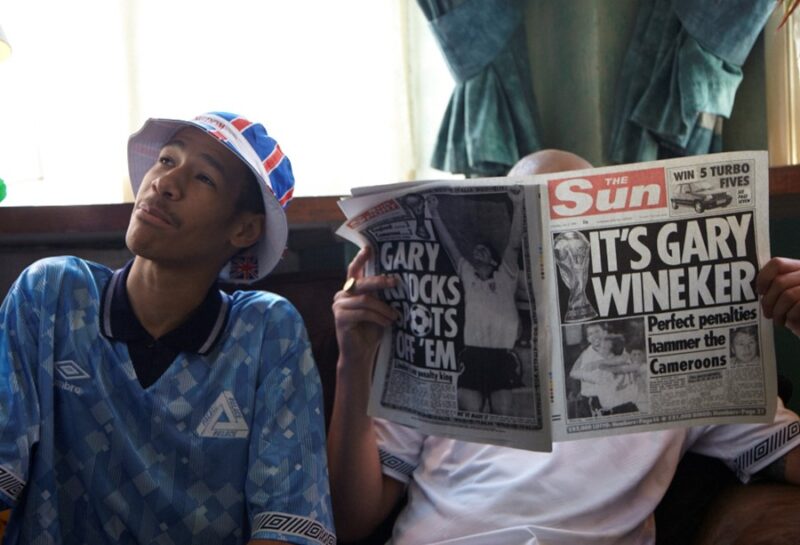 Another iconic Umbro link up channelling peak 90’s nostalgia via a banging football shirt, Palace and Umbro’s homage to England’s third shirt from Italia ’90
remains one of the best collab jerseys from the last decade. Released before the explosion of jersey culture hit its heights towards the end of the last decade, the 2012 collab kit still stands the test of time, with the wild all-over blue gradient graphic remaining iconic to this day. 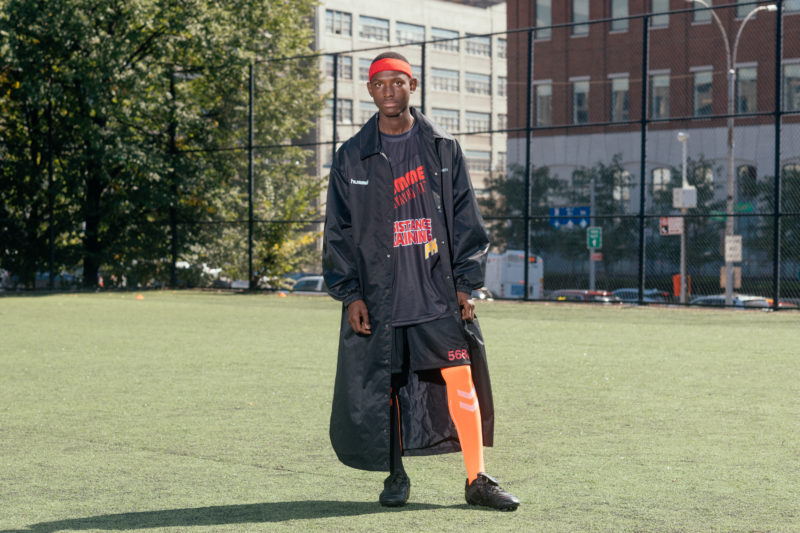 Danish International Sportswear brand hummel have been collaborating and Willy Chavarria for a couple of years now, and the debut collection from the New York menswear designer was one of the hardest capsules we’ve seen to date. The collection – designed to identify football as a global unifier of people – featured striking over-sized pieces and re-interpretations of both the Willy Chavarria and hummel logos in a blend of red, white and black colourways.

Cherwell’s albums of the year so far