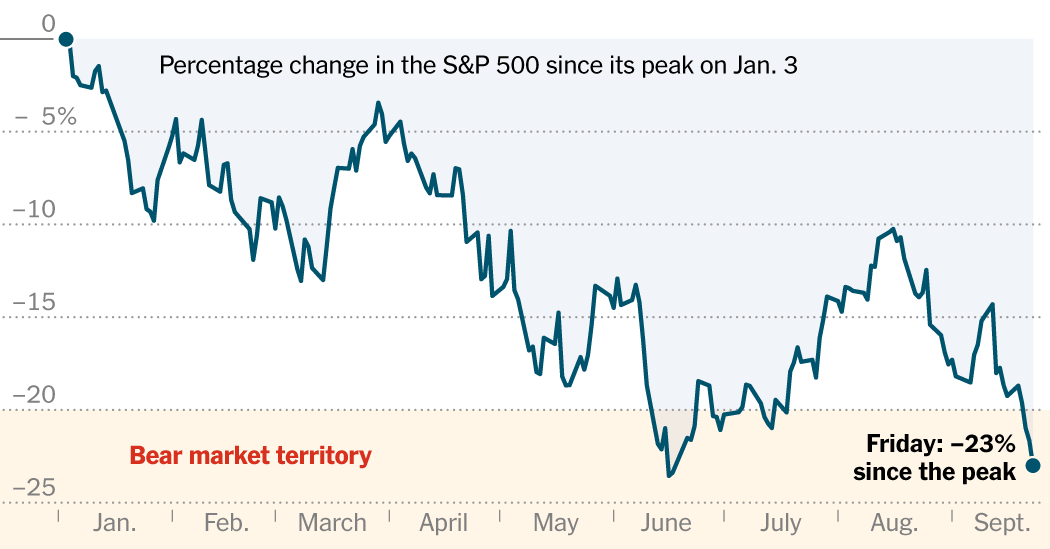 Their worries grew throughout the week as central banks around the world, from Sweden to Indonesia, once again wielded their blunt but powerful tool — interest rate increases — to combat inflation. Previous rate increases have already raised costs for consumers and businesses. Further ones could augur a period of higher unemployment and slower economic growth.

Investors don’t like that prospect. So they sold off shares on Friday, pushing the S&P 500 stock index down by as much as 2.9 percent, before a late rally left the index 1.7 percent lower at the close of trading.

The sell-off leaves the index just above its lowest point for the year in June, almost wiping out gains from a mini rally over the summer that came amid misplaced optimism that the worst was over for the market. The benchmark index is down more than 22 percent for the year, and on course next week for its third straight quarter of losses, the first time that has happened since the global financial crisis sent markets into a tailspin in 2008.

Our Coverage of the Investment World

The decline of the stock and bond markets this year has been painful, and it remains difficult to predict what is in store for the future.

Earlier this week, the Federal Reserve raised interest rates by three-quarters of a percentage point for the third time since June. Jerome H. Powell, the Fed chair, warned that more pain was to come as the central bank focuses single-mindedly on fighting inflation.

The rapid climb in interest rates across the world is “increasing the chance of recession,” said Kristina Hooper, chief global market strategist at Invesco.

“It’s painful and it is happening fast but so are the rate hikes,” she added. “It’s not just the U.S.; it’s so many central banks.” The fact that investors have had to constantly and rapidly adjust to the evolving environment is “very, very disruptive,” she said.

Moves across the Atlantic also unnerved investors. On Friday, the new British government announced a sweeping series of tax cuts, betting it had found the path to economic growth despite high inflation. But many investors feared that the tax cuts would overstimulate the country’s economy, leading to even more rate increases.

The FTSE 100, Britain’s benchmark stock index, fell more than 2 percent. Europe’s Stoxx 600 index fell into a bear market — defined as a fall of 20 percent or more from its most recent high. And the British pound dropped more than 3 percent against the U.S. dollar to about $1.09, its lowest level since 1985. The pound also fell roughly 2 percent against the euro on Friday.

Reflecting worries about economic growth, the price of West Texas Intermediate crude oil, the U.S. benchmark, was down more than 5 percent, dropping below $80 a barrel for the first time since early January. Also, a closely monitored index of manufacturing data showed that manufacturing activity could be cooling in Germany, France and the United States at a level that would imply a shrinking economy. That too added to fears of an impending recession.

Global central banks are acting in concert after being caught flat-footed this year. Russia’s war with Ukraine sent energy costs soaring, and supply chain bottlenecks pushed prices of products higher at the same time as demand grew because the world was emerging from the coronavirus pandemic. That mismatch led to sharp increases in the cost of goods and services.

Until last year, central bankers largely considered inflation to be transitory, but it has instead dug its heels in, leaving policymakers with little choice but to raise rates. As rate increases make their way through the economy, people buy fewer things and borrow less money, which eventually brings demand back into line with supply.

The course of action wasn’t surprising to investors. Rather, it was the speed with which central banks moved this week that sent them into a frenzy.

“It’s a continuation of the worries we’ve had all week that global central banks being led by the Fed are hiking rates sooner than we thought to combat inflation and likely leaving rates higher for longer,” said Ryan Detrick, chief market strategist at Carson Group.

In response, yields on government bonds, which move in the opposite direction of prices, have soared. The yield on the two-year Treasury note, which is sensitive to changes in Fed policy, leaped 0.32 percentage points this week to 4.19 percent, a huge move for a bond that typically moves in tiny fractions.

With higher rates signaling higher costs for companies, Goldman Sachs on Thursday lowered its year-end forecast for the S&P 500 to a level that implied a roughly 5 percent fall. By the end of Friday, the market had blown through half of that.

Investors are now turning their attention to October, when they will get a chance to peer into the performance of corporate America as companies begin to report third-quarter earnings.

“Investors are bracing for downward guidance from C.E.O.s,” said Jeff Kleintop, chief global investment strategist at Charles Schwab. “We are stuck in this loop of weakening growth and higher and higher rates.”

At Elton John’s White House concert, tears and a trip down memory lane