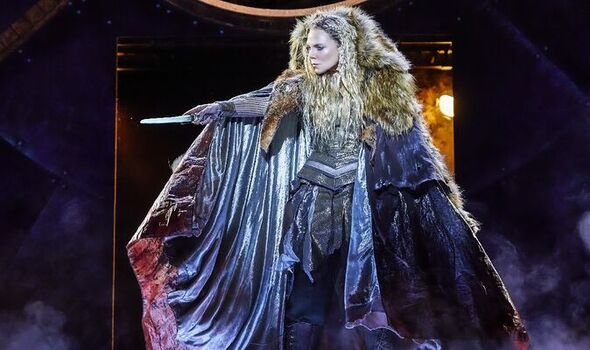 This varied professional journey, moreover, is matched by a personal life that is pretty unconventional, to say the very least. But whether at work or at play, Sam (as everyone calls her) is, in her own words “post-pandemic happy”.

She certainly looks it. Although she’ll be 50 in November you’d never guess. Devoid of make-up and with two schoolgirl plaits, she could easily pass for 10 years younger.We have met in rehearsal studios in the industrial wasteland of docklands London.

She’s about to open in theWest End in a production of The Lion, The Witch And The Wardrobe which started life at the Curve in Leicester before Christmas.

She’s been with the show ever since. It runs at the Gillian Lynne theatre from July 28 until January.

Sam plays the Wicked Queen, a really meaty role, she says, that perfectly encapsulates author CS Lewis’s exploration of good and evil in the fantasy novel for children written in 1950 but still with much to say to a young audience today.

“The Queen is such a complex character. On the one hand, she’s serpent-like, an arch manipulator – but she’s also a maternal figure and senses young Edmund’s damage. She’s playful, sweet, seductive and then you get the pay-off when she becomes a terrifying tribal warrior face-to-face with Aslan, the lion and noble king of Narnia.”

What has been satisfying touring with this production, she says, is the multi-generational make-up of the audience: grandparents, parents, grandchildren.

She herself has two children by her second husband, actor Mark Womack, 61.

Ben is 20 and fresh out of Falmouth College where he has been studying film; Lili is 17 and at a performing arts school studying music production.

Sam was a student at Sylvia Young Theatre School. “I hadn’t got on all that well in the conventional education system. I’d moved around quite a bit and found it difficult to settle. I didn’t know what to do with all this pent-up energy.

“But, as soon as I was introduced to performing I felt I had an outlet for all that angst.”

As a jobbing actress she appeared, among other minor roles, in a 1990 made-for-TV film of Jekyll and Hyde with Michael Caine.

Eurovision in Rome in 1991 with A Message To Your Heart, finishing in a respectable 10th place.

“It was pretty scary if I stopped to think I was singing in front of a TV audience of 55 million. I didn’t want to sing for some time after that, which is why I concentrated on acting.”

In a West End production of Grease in 1993, she managed to combine the two.

“At the first audition I panicked and ran out of the theatre. But luckily they asked me back the following year and I was cast as Sandy opposite, first, Craig McLachlan and then Shane Richie.”

Work has flowed in a steady stream in the ensuing three decades. She was in Guys And Dolls with Patrick Swayze and then Don Johnson. She starred in Harold Pinter’s play Betrayal, directed by Sir Peter Hall. She co-starred with Colin Firth and Samuel L Jackson in two Kingsman films. She sharpened her comedy chops in TV’s Game On and Babes In The Wood.

And she was Nellie Forbush in a hit stage production of South Pacific in 2011. “It felt such a lovely contrast after four dour years in EastEnders.” 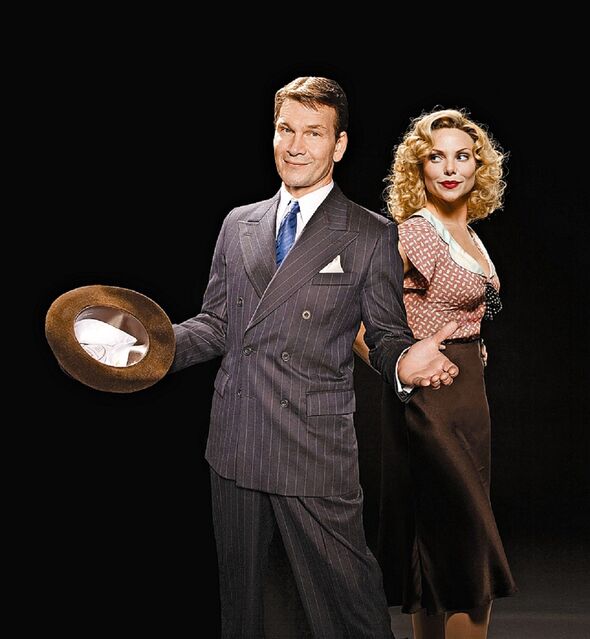 Ah, Walford. There were two slabs – 2007 to 2011 and 2013 to 2017. And her return to Albert Square made her very famous indeed, with millions tuning in to the baby swap storyline and, ultimately, the death of her character, Ronnie Mitchell, and her sister Roxy, played by Rita Simons. Rita once told me she hated the way the sisters perished in the double drowning and wouldn’t watch those episodes or the funeral or, indeed, EastEnders ever again.

“Oh, I watched it all,” says Sam. Nor does she regret Ronnie being written out for good. “In retrospect, it would have been very hard to have kept those characters fresh after all the tragedy that had befallen them.

“Having said that, I’d done the job for so long, it was almost as if I believed that family to be my parallel family. I attached myself to that role, emotionally speaking, to the point where I’d forget it was just a job.

“It played tricks with your brain. Roxy was my sister. She felt like another version of my family.

“Barbara Windsor was my Auntie Peg and so on. So, when all that came to an end, it took a little while to adjust personally. It was a jolt.”

Neither she nor Rita had any say in the way they were to be despatched: “I got a phone call from the producer, Sean O’Connor, summoning me to his office. Rita was on holiday.

“I was told the news and, although I remember feeling sad, it wasn’t a traumatic meeting.”

She was told, though, that she mustn’t contact Rita with the news: “Naturally, I took no notice of that! I told her that Ronnie was going to be killed off but that I didn’t know what they’d planned for Roxy. Which was the truth.

“To be honest, filming those last scenes was exciting, what with all the underwater work. But yes, it was sad watching the two bodies floating face down.

“Lili and I watched it together curled up with a club sandwich. A great way to see in the new year! I don’t watch EastEnders anymore, though, but then I didn’t much at the time.”

In 2019, there was more drama, this time on stage, when she starred ” In a West End production ofThe Girl On The Train, the gritty thriller based on Paula Hawkins’s best-selling book. It was a big hit although there’s another reason why it has a special place in her heart.

Among the cast was Oliver Farnworth, 39, known to TV audiences from roles in Hollyoaks, Mr Selfridge and as Andy Carver in Coronation Street.

The two fell in love and now live together both in her Bedfordshire farmhouse and a new property they’ve bought in Spain.

When she and Oliver got together she was still married to Mark, although the relationship had pretty much run its course: “We were together 20 years but you inevitably change a lot during that time.

“The challenge is to stay friends when it’s over. Otherwise, those years will have been in vain.

“Now, we have quite an untraditional Situation,” she adds, which is something of an understatement.

“I speak to Mark about six or seven times a day, if he’s in his house in Liverpool. 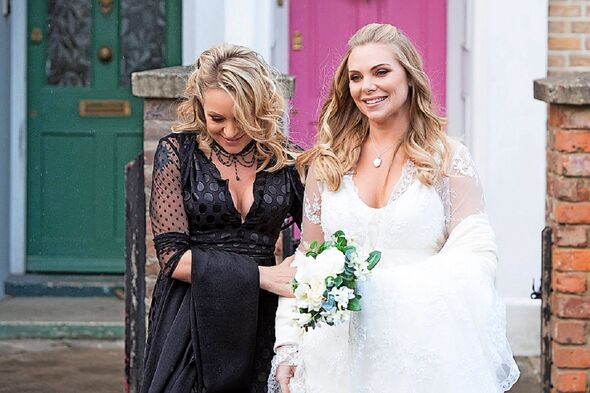 READY TO ROLE: Samantha in EastEnders with co-star Rita Simons in 2016 (Image: BBC)

“But we see each other at weekends when he comes to stay with me and Oliver and the kids.

“I talk to him more now than when we were married, probably because we irritate each other less!

“We never fell out, though, never argued. But we started wanting different things out of life without losing each other as friends.

“And because we share children – I’ve also been stepmum to Mark’s son, Michael, since he was four – it makes sense that we continue to share our lives.

“We enjoy spending time together. I like to think that all the people in my life are kind human beings.

“We all love each other. We pride ourselves on co-existing happily. Mark and Ollie have become very good friends and spend lots of time together. They’re off to Spain soon to sort out the garden there.”

Sam and Mark have worked together, most notably in the Merseyside police TV series Liverpool 1, at the end of the 90s. “He said he’d never work with me again because I was so bossy. Seriously, he’s a phenomenal actor. He’s just about to film the second series of Responder with Martin Freeman.”

She sounds happy. “I am. At work and at home. And, believe me, I know how lucky that makes me.”

Why The Adidas Samba Sneaker Is Trending Again In 2022