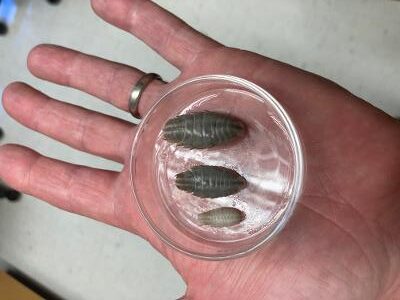 Just what are these parasites showing up on Chesapeake Bay stripers?. Hamish Small photo

Catching a fish with some sort of parasite either in it or on it isn’t all that unusual. One well-publicized Atlantic croaker recently caught in Galveston, Texas, was “hosting” a tongue-eating isopod—a parasitic louse that somewhat resembles its terrestrial cousin, the pill bug or “roly-poly. Now, reports are surfacing of yet more parasitic isopods attaching themselves to the bellies, tails, and fins of fish in and around the Chesapeake Bay.

According to reports, the fish most afflicted seem to be striped bass and sheepshead, with one sheepshead loaded with more than 20 of the freeloading organisms on its tail fin and the caudal peduncle—the narrow part of a fish forward of the tail. One striper had 8 attached to its pelvic fins alone. The parasites somewhat resemble sea lice, but they more closely look like wharf roaches, scientifically known as Ligia exotica. These crustaceans are found in droves along the East Coast in riprap and on docks and seawalls.

Hamish Small is an Associate Research Scientist at the Virginia Institute of Marine Science in Gloucester, Virginia. He has a doctorate in Marine Parasitology. He notes that sea lice are parasitic copepods but the creatures found on the fish look like parasitic isopods.

“Parasitic isopods are quite challenging to identify,” Small tells F&S. “And I’m not an expert on this group.”

His first inclination is the parasite is a Livoneca redmanii, a species known to be in the Chesapeake Bay. “L. redmanii is reported from our Chesapeake Bay region from bluefish and striped bass, so common sense suggests that this is what it is,” he says. But Small is examining the DNA of these crustaceans to precisely determine the species.

“Until I sequence the DNA, I’m reluctant to provide a definitive identification or suggest that this is ‘new,’” he says, adding his money is on L. redmanii.  “If you spend any time on fishing boards, especially those focused on stripers, invariably someone will post a pic of a striper with one of these parasites attached to the fish, wondering what the hell it is.”

Read Next: Revolting Flesh-Eating Parasite Ate and Replaced a Fish’s Tongue in Texas

Small tells F&S that the unusual things about the recently reported examples are the number of parasites observed—especially on the sheepshead—and their location. Small says these parasites are usually observed in the buccal (mouth) cavity or gill chamber.

“If we get more reports of heavily infested fish from anglers, then we will take a closer look,” he says. Anglers catching fish with parasites in the Chesapeake Bay region should take a photo and call VIMS at 757-787-5834.

Robinhood promised to take crypto investors to the moon, and there’s no turning back now – Fortune

Kareena Kapoor in ₹43k top and velvet pants enjoys day out with family: Can you guess her bag’s price? | Fashion Trends