TEMPE, Ariz. – (At 3:00 p.m., officials with the City of Tempe will provide an update on the derailment incident)

A bridge over Tempe Town Lake caught on fire and partially collapsed after a train derailed on the morning of July 29.

Tempe Fire Department officials say the derailment happened around 6 a.m., and involved a Union Pacific train. At least 90 firefighters responded to the scene.

Union Pacific spokesperson Tim McMahan says none of the train’s crew members were hurt, but there was a report of someone suffering from smoke inhalation. McMahan also says eight to 10 rail cars caught on fire.

Some of the train’s cars carried lumber and others were tanker cars. McMahan said he did not know what was inside the tanker cars but that there were no reports of any leaks.

Three tank cars fell into the park below; two of them contained cyclohexanone with the third containing a rubber material.

Cyclohexanone is a flammable, colorless oily liquid, and nearly 95% of its manufacturing is used to make nylon, according to the National Library of Medicine.

None of the rail cars are reported leaking, and the cause of the derailment is under investigation.

According to officials with Valley Metro, the light rail station at Mill Avenue and 3rd Street is closed. Passengers on eastbound trains will get off the train at 38th Street and Washington, and then board a bus to travel to Tempe and Mesa, stopping at each light rail station.

Meanwhile, Valley Metro officials say passengers heading west on the light rail will get off the train at the Smith-Martin and Apache Boulevard station, and then board a bus that will stop at each light rail station.

None of the buses will stop at the Mill Avenue and 3rd Street station, according to Valley Metro officials. Officials also say Tempe Streetcar construction works in the area near the incident have ceased for the time being.

Rail bridge was the scene of prior derailment incident

FOX 10 has confirmed that this was nor the first train derailment on the bridge for summer 2020.

The Phoenix Fire Department says crews responded to a partial derailment on the same bridge on June 26 after some of the rail ties caught fire.

According to Union Pacific officials, the bridge was damaged, and was subsequently repaired. It reportedly took two days to repair and reopen the bridge.

Union Pacific officials also say the bridge had received its yearly inspection on July 9. They won’t release what the inspection found, instead saying it is in the hands of NTSB. FOX 10 has requested more information from the inspection, in addition to the full report from the June derailment.

Tempe resident Elizabeth Deitchman heard the crash on July 29, and immediately had a sense of deja vu.

“It sounded like big booms, crashing noises,” said Deitchman. “My immediate thought when I heard the noise was ‘wow, this happened again. The train derailed again.’ That was my initial thought, and I was right.” 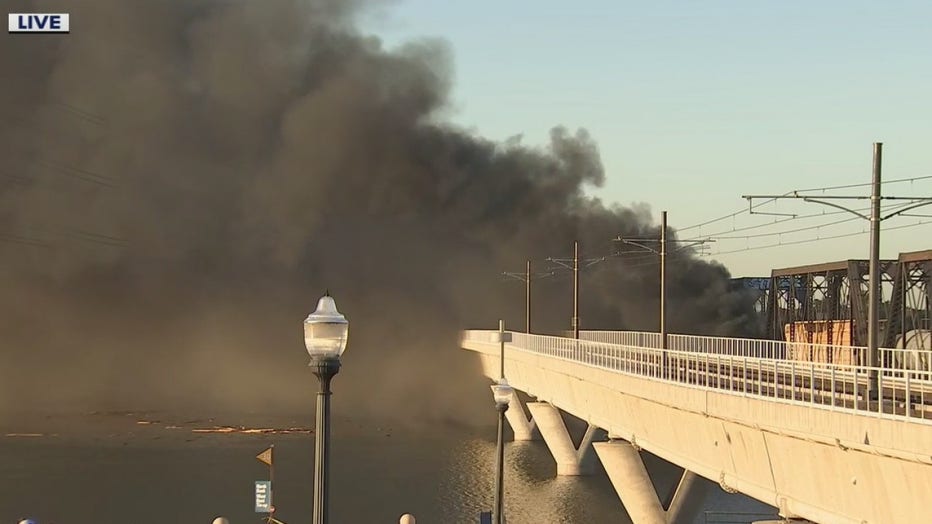 Governor Doug Ducey released a statement on the train derailment:

“I commend the quick actions of first responders this morning to protect lives and property. Our focus is on protecting public safety and providing any and all resources and assistance necessary to aid Tempe. The State of Arizona, including the Department of Public Safety, the Department of Transportation and Department of Environmental Quality, are actively coordinating with local responders. I’ve also reached out to Tempe Mayor Corey Woods to express the State’s full support in this response. We’ll continue to monitor this situation closely and make all support available.”

Traffic near the area is being restricted near the lake and west of downtown Tempe, and Valley Metro light rail trains are being rerouted at Mill Avenue/3rd Street and 50th Street/Washington.

The Loop 202 has reopened after being closed since 8 a.m. Wednesday morning.

The City of Tempe has canceled all boating activities and classes due to the derailment, and the lake is closed until further notice.

The 2.5-mile man-made lake is a popular recreation spot for jogging, cycling, and boating located near Arizona State University.

The Associated Press contributed to this report.

Get breaking news alerts in the FREE FOX 10 News app. Download for Apple iOS or Android.

Britney Spears’ Chaotic Instagram Is All of Us Right Now

Britney Spears’ Chaotic Instagram Is All of Us Right Now

HOW MALE MODELS GET SUPER RICH IN A FEMALE-DOMINATED INDUSTRY

please come to my account and upvote it, i need to feed my 4 kids

Crypto’s Answer to a Yield-Starved World

Coronavirus: The viral rumours that were completely wrong