After 2 riveting seasons of Pose, the hit FX drama is coming to an end. The premiere of the 3rd season will air on May 2nd, and we have tons of questions on the direction of their final season. Will Poppy and Angel get married? Will Candy make more ghost appearances? What’s going on with Pray Tel and Ricky? And the obvious question is, how’s that body doing in Mother’s closet?

Pose rendered the audience with lots of drama, but it also helped push the culture in a new direction by providing education, diversity, inclusion and representation. The series, which explores the urban ballroom scene and dissects the wake of the HIV/AIDS pandemic in the late 80’s and early 90’s, dives into the resilience of the LGBTQ+ community and how they became activists in efforts to save the rest of their community.

The show, which was nominated for a Golden Globe for the Best Television Series, pushed representation to the forefront. The world got a glimpse of ballroom artistry and fashion, but we also got to experience a show that was dedicated to highlighting Black and Brown trans voices. While we are mourning the end of a culture-changing series, we are celebrating the inclusive space that allowed an entire community to be heard. This show highlighted a bunch of talented, stylish dreamers who expressed themselves through art, music, dance and more.

The multifaceted series also exposed the fun and dramatic side of fashion in the late 80’s and early 90’s. Each character used their personal style to tell a story, and it often played out on the runways of the ballroom dance floor. From sassy street style looks to extraordinary Avant-garde pieces, fashion lovers were often left in awe of the creativity behind each ensemble. We expect the 3rd season to bring all the fashion lewks. Set in 1994, will likely see more denim patch work, a little bit of grunge, and a lot of glamor.

Last night the stars of ‘Pose’ walked the red carpet for the series finale of their hit show. As expected, each start gave exactly what we needed them to give! 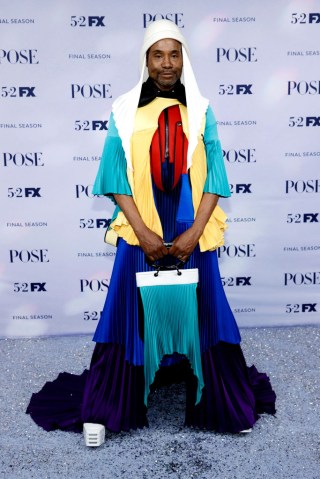 We all know that Billy Porter is on another frequency when it comes to fashion. We couldn’t wait to see how he was going to bless the Pose red carpet, and of course he gave us the edge he is known for displaying. He pulled up to the event in a multi-colored Birds of Paradise layered look by Robert Wun. His matching purse, white platform shoes, and white head cover completed his unique garment. He was styled by Ty Hunter and Collin Anderson. 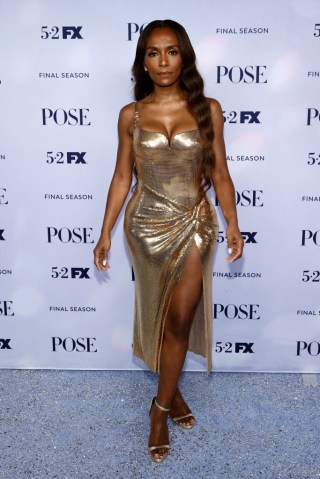 Janet Mock stunned in Versace. Her gold shimmery dress draped perfectly on her beautiful melanated skin. The high split was sexy, and the detailing on the straps added even more character to this fabulous gown. For the accessories, Janet kept it modest with gold ankle strap heels and stud earrings. 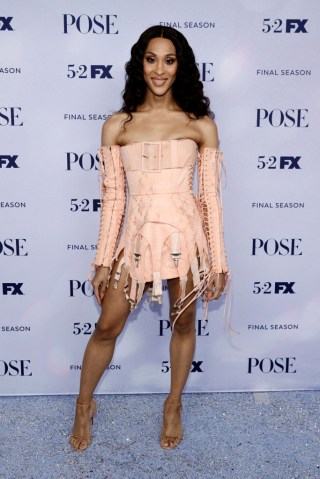 Creativity is always welcomed on the red carpet, and MJ Rodriguez gave us just that. Her strapless Jean Paul Gaultier SS20 Couture was a combination of fashions. From her laced up, detached sleeves to her upside-down corset/dress, featuring a belt at the top and straps at the bottom, this look is one to remember. Her tan, ankle sandals strap sandals were the perfect addition to her intricate dress. She was styled by Katie Bofshever. 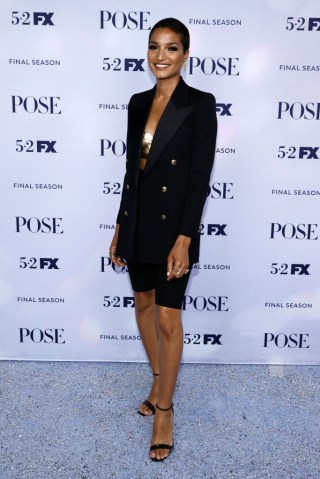 Indya kept it classic for the Pose season 3 premiere. She showed up in a black, Saint Laurent SS21 RTW set paired with a strapless gold bralette. Her Ananya and Karma El Khalil jewelry was subtle yet chic, and she kept her footwear simple in black ankle-strap heels. This is not a normal look we see on red carpets, and we love it. The biker shorts and the oversized blazer with gold buttons gave us 90’s vibes. Indya was styled by Ian Bradley.

KUWK: Kim Kardashian Shares Pic From Her Teen Years And Fans Point Out How Much Daughter North Looks Like Her!