Personally, I’ve always been a midi skirt kind of gal. I love the way they flatter my figure, and they can be dressed up with heels or down with crisp white kicks depending on my plans for the day. They’re also easy to run around in—unlike my former arch nemesis, the mini skirt. Don’t get me wrong, I love the look, but talk about impractical! That said, it seems the mini skirt is having quite the comeback, and it’s even more mini than before. Behold, the micro-mini skirt, as beloved by none other than teen fashion queen Olivia Rodrigo.

Rodrigo’s style has been on point since the first time the bridge of “Driver’s License” brought a tear to my eye, but since she’s exploded into the spotlight, her wardrobe has only gotten better. A lover of Y2K aesthetics (of course), she’s managed to infuse a touch of Bratz doll flair into every look, whether she’s rocking a vintage slip, a crop top and jeans or a glittering David Koma gown on the red carpet. Yes, I’m referring to the AMAs look that still gives me goosebumps.

That said, there’s one wardrobe essential Rodrigo is all but known for: the micro-mini skirt. And if anyone can make minis cool again, it’s Olivia! Just this week, she took to the ‘Gram to post an envy-inducing OOTD, the star of which was a Heaven by Marc Jacobs camo-printed skirt.

Alllll the TikTok fashion girlies stan Heaven, Marc Jacobs’ Gen Z trend-driven diffusion line, and Rodrigo might as well be its muse. She rocked the skirt with a super-cropped patchwork cardi with XL sleeves, a white tank and Marc Jacobs Kiki Platform Boots, which have become her signature footwear of choice.

Honestly, as anti-mini skirt as I once was, Rodrigo’s look has won me over. Unlike the jean minis of my past, it seems the 2022 iterations are much higher-waisted (a.k.a. more flattering) and feature more of an A-line silhouette than the body-con black skirt I wore to every single bar in a five-mile radius of Washington D.C. in my college years. The look has evolved and elevated—now, mini skirts seem chic.

And if chic micro-minis are what you seek, look no further than then Miu Miu’s Spring Summer 2022 collection, which featured a bevy of deconstructed workwear looks that put the micro-mini in the spotlight. In fact, the Miu Miu versions are so micro, they make Rodrigo’s itty-bitty Heaven skirt look long! 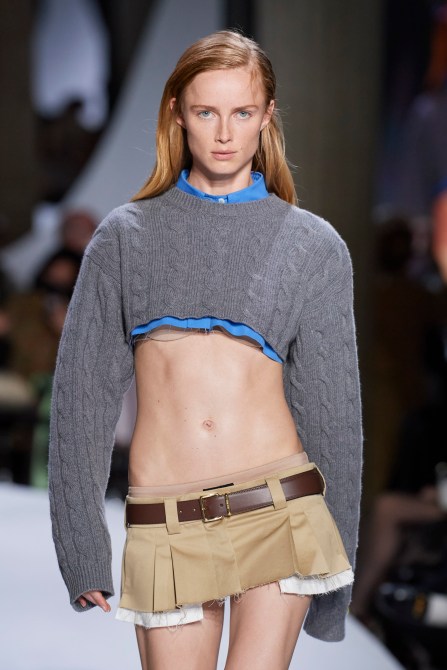 Do I feel a bit weird crediting a trend that was alive and well in the early 2000s to someone who is only 18? Not really. Mini skirts have been out of style for quite some time, and it takes a big celeb to bring such a controversial garment back. Not only were mini skirts over-sexualized back in the day, but they were pretty impractical to wear. Don’t lie—you definitely wore leggings or biker shorts underneath so as to avoid an accidental flashing fiasco.

Between Rodrigo and Miu Miu’s latest runway, it’s safe to say mini skirts are back. And the shorter the better! Apologies to my fellow midi skirt fans—it appears we’ll all have to start showing some leg very, very soon.

'A boom, then a monster sound': 10 hurt after bridge over Pittsburgh's Frick Park collapses – Pittsburgh Post-Gazette

#SupplyGate and the Battle to Frame Crypto’s Next Bull Run