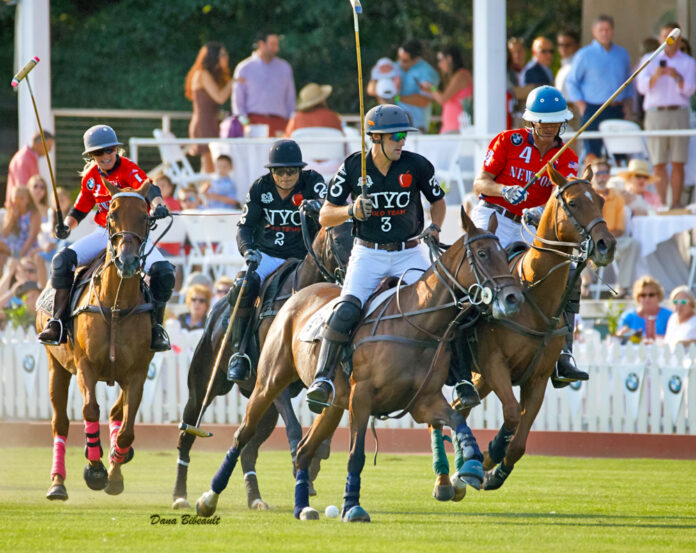 Portsmouth, RI – The Newport International Polo Series will host the Champagne Cup on Saturday, August 22 at 5 pm, with the home team facing its next rival – NYC, vying for the newly minted Champagne Cup, as the series of highly competitive regional challengers unfolds this season.

“Last year, New York City gave us everything we can handle, and then some. This year we are looking for a different outcome,” explains Dan Keating, Newport Captain.

This week marks the start of the 2020 champagne harvest in France and other champagne regions around the world, marking the earliest start date in history, to reduce its environmental footprint and adjust to climate change.  New York is one of America’s sparkling wine producing regions and arguably the largest US market in consumption as well.

The match will be witnessed by a limited live spectator audience in one of this season’s rare 17 matches, still the only attended sporting event in New England since the start of the pandemic.  Limited seating is available, online only, at www.nptpolo.com.

During the match, Best of Show judging will be presided by special guest – CBS’s Ashley Erling, Executive Producer of The Rhode Show – awarding Stella Artois’ special prize and Jumbotron moment of fame to the most festive group of the day, with a Bubbles theme.  Dedicated portrait photography will capture details, to be published on the party pages of Boston Common Magazine, the region’s premier luxury/fashion/lifestyle magazine. Souvenir portrait photography by Cocoa & Co. will be available.

Amenities at the polo grounds include beverage service for seated patrons in the Davitt Pavilion, and carry-out service from the Patio Bar, and champagne delivery to lawn seats by the Clicquot Cart.  Licensed gourmet Food Trucks with a variety of popular refreshments including handmade pizza, gourmet hotdogs, gourmet donuts, kettle corn, homemade ice cream and refreshing shaved ice, and the official team sportswear pieces debut weekly in the fieldside Pro Shop.  Expert live commentary of the polo action is provided along with instant replays and live video action produced on the polo world’s first Jumbotron.  A half-time intermission will give spectators the opportunity to have a socially-distanced and masked stroll across the playing field to replace divots, a time-honored polo ritual that helps restore the field for the second half.

After 6 periods of competition, called chukkers, the match will conclude with the Newport Polo Fan Salute around the perimeter – a salutatory tradition originating at the Newport International Polo Series in 2003, and now emulated at polo clubs around the world, and the Veuve Clicquot Champagne Toast & Trophy Presentation awarding the Champagne Cup.

Under a State-approved COVID-19 safety plan for reduced capacity with socially-distanced seating options from which to view the matches at the polo grounds, including tables in the Davitt Pavilion, or fieldside Tailgates and Picnic Patches on the lawn, sold-out audiences each week have enjoyed the Newport International Polo Series polo matches since Opening Day on June 6, where spectators for nearly 30 years have witnessed the timeless sport unfold across an argyle-patterned emerald green at Glen Farm, home of the Polo Series for the past 28 seasons, in a classic exhibition of horsemanship and valor, with host, the Newport Polo Club, where the home team – Newport/USA – meets challengers each season from around the world and as well as teams representing major US cities and regional rivals in one of Newport’s unique traditions & renown attractions.

Originally scheduled to feature USA vs. Jamaica, the international rivalry has been rescheduled to 2021.  The Polo Series is scheduled to continue presenting polo matches for the remaining 6 weeks in the 2020 schedule, each Saturday through September. The roster of teams is subject to change, as per RI State mandates in effect at the time, on international travel and Adult Sports.  Stay current with the 2020 team lineup & stats, latest news, events, and more by e-scription to the Gameday Digest (sign up) and weekly eMagazine (sign up). Both subscriptions are private and spam-free.

Safety being a top priority, COVID-19 safety measures are in effect at the polo grounds this season including online sales, masks required when not seated, social distancing and greatly reduced capacity.  Read full details

“Opening Day 2020 was a monumental victory and a huge vote of confidence from our State.  We are fortunate to have State officials that have worked tirelessly for RI’s recovery.  With their guidance, the modifications that are in place are to ensure everyone’s safety attending polo, and will be enforced by security personnel,” adds Keating, Polo Series Founder.

The International Polo Grounds are located on the acreage of Glen Farm, 250 Linden Lane (off of Rte. 138) in Portsmouth, RI. This bucolic setting is the last 100 acres of a pre-colonial settlement from the 1600’s that became the Town of Portsmouth’s original gentlemen’s farm, an 800-acre manorial estate established during a Gilded Age movement of retreat from the high life into pastoral country acres.

Its classical 19th century stone barns and its park-like grounds were rehabilitated by Keating in the early ‘90’s and continue to thrive as an equestrian & community recreational property, and home of the Polo Series.

Polo, since 600 b.c.  Polo is, without doubt the oldest ball game in the world today. First recorded in the 6th century b.c. when the Turkomans beat the Persians in a diplomatic tournament, the alluring game caught on with equestrian royalty and cavalry, and took off with globalization, withstanding the tests of time. By the time Polo arrived on Newport’s shores during the Gilded Age, the sport was nearly 2500 years steeped in tradition, captivating newcomers like Newport’s summer sporting set who embraced the new pastime, establishing America’s first polo club in 1876.  A charter member of the United States Polo Association the club today is still a trailblazing model polo club, hosting the Newport International Polo Series public exhibition matches, supporting philanthropic causes, organizing USPA tournaments, polo club member services and polo instruction year-round. Experience the king of games in its American landing at Newport Polo.

What’s Up Newp is Newport County’s most-read online news source. The information, journalism, and news that we provide on a daily basis are made possible because of the support of our readers and advertisers. Help support our locally owned, independent, award-winning newsroom by becoming a What’s Up Newp Supporter today.