These are the biggest Bristol Uni Depop shops 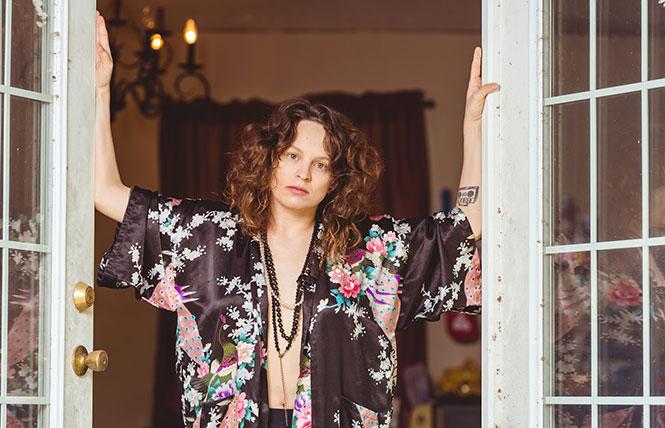 There’s a lot to like about Trinidad (Merge), the new album by Austin-based Sweet Spirit, including the modern glam-pop direction in which the band is moving. The first couple of tracks, “Behold” and “Fear Is a Lie,” have a timelessness that recalls the early 1970s as seen through a 21st-century prism. Lest we forget the album’s mid-2020 release, the contemporary reggaeton beat of “No Dancing” is a good reminder, as is the irresistible dance beat of “Llarondo.”

Of course, these songs wouldn’t have the firepower they possess if not for the incredible vocal abilities of lead vocalist Sabrina Ellis. Ellis, who came out as non-binary in late 2019, was kind enough to answer a few questions in advance of the album’s release.

Gregg Shapiro: Sabrina, for those who might be unfamiliar, please say something about the genesis of the band’s name, Sweet Spirit.

Sabrina Ellis: The name Sweet Spirit comes from an insignificant moment in an indie film called Electrick Children (from 2012). In this film, some kids escape from a really conservative, backwoodsy Mormon situation. One of the kids does a Vicodin in L.A., and says, “Have you noticed how many beautiful women there are in L.A.? Back home it’s all sweet spirits.” One of the L.A. kids asks, “What’s a sweet spirit?” And the Mormon boy says, “Sweet on the inside, but not so great looking on the outside.” The name comes from some outdated Mormon slang.

Would you say that Sweet Spirit’s glam-pop sound is a culmination of the other bands in which you’ve performed or do you consider it a fresh sonic start?

I think it’s a culmination of all the other bands in which I’ve performed. By the time we started Sweet Spirit, I had been in two bands that were important to me. My punk rock band A Giant Dog and Bobby Jealousy, which was kind of a glam-pop band. Andrew Cashen was my co-writer in A Giant Dog and he’s also my co-writer in Sweet Spirit. We were thinking Sweet Spirit would be a blank slate and we had wanted to build a new house, we ended up using what we knew and what we had learned. The same builders built this new house.

That’s a good description! According to the liner notes, Trinidad, the title of the band’s third album and Merge Records debut, “is named after Sabrina’s abuelita Trinidad Sanchez-Montemayor.” What would she have thought of the album?

That’s an interesting question. She’s somebody I knew only when I was a little girl and somebody that I know through pictures. I want to imagine Trinidad Sanchez-Montemayor listening to this album. Maybe she’d be wondering how the hell she’s supposed to dance to this music [laughs]. If this were the ’80s and we had made this album at that time, I hope that she would have given it the time of day, gotten up and done a little dance.

That’s really touching. How much of your abuelita’s or family’s influence has to do with your singing in Spanish on “Llorando,” speaking Spanish in “Y2K” or the even reggaeton beat of “No Dancing”? 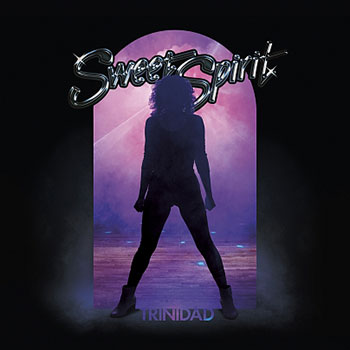 It has a lot do (with it). My Mexican heritage is a texture within my personality, within my voice and the way I sing. It’s interesting to be a mixed-race person and to be a few generations out from a Mexican national. I think people of mixed-race are always looking for their identity. As a kid, you’re trying to grasp who you are. For me, my visits to Mexico, and knowing that my family comes from somewhere else and lived a different culture, has a different type of food, and dances together at family parties, that was all informative to who I am.

The previously mentioned “Llorando” is a very danceable track. What would it mean for you to become a dance music icon, worshipped by gay men?

Ooh, that just gave me chills! I think that people could appreciate me as a dance icon, if they were willing to accept my movements. Suspend the traditions and the pedigrees that they know about dancing. If they were willing to accept something a little bit janky, I could be considered a dance icon. I make these attempts to do what I see on a ballet stage or on Soul Train reruns. [Laughs] in my attempts, I get somewhere interesting and innovative.

“Only Love,” which is one of my favorite songs on the album, features lyrics about getting married. What can you tell me about the song?

“Only Love” is also one of my favorites on the album. I felt like I had an opportunity with that one to write more lyrics than there was song, to allow the song to follow the thought. Whereas our songs are usually poppy; you try to fit the concept into the pattern. This one, not so much. It’s a song about a fear of commitment. I’m singing from the perspective of the person who wants to commit, even though in my life I’m not always that person. I definitely go back and forth between being that person and being the person that’s burning the house down.

The album closes with the song “Empty Bottle” which is also the name of a storied Chicago live music venue. Have you performed there with Sweet Spirit or A Giant Dog?

Absolutely! That’s my home base in Chicago. I love to perform there. The song “Empty Bottle” is also about somebody not wanting to reproduce. Not wanting to have a relationship that involves talk of children. I thought it was time for a pop song about that. The song was in its developmental stages while we were on a tour. We were playing the Empty Bottle and I looked at the guys and said, “Let’s play that new one.” They said, “No, it’s not ready.” I said, “Let’s do it. It doesn’t matter if we fuck it up in front of these 300 people who come to our shows. They’ll forgive us!” They said, “Fine.” I told the audience we were going to play a song we’ve never played live before and if it goes well, we’re going to name it after the club. 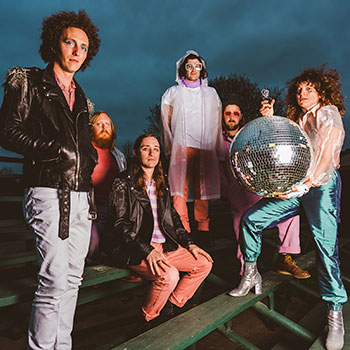 What an honor for them! In a December 2019 Instagram post, you came out as non-binary. You also mentioned having a “serious crush on Mary Martin” in your post. Does that have anything to do with her gender queer portrayal of Peter Pan?

Yes! When I was a kid, a library near my house closed. I took home all of these VHS (tapes) from the library stock. I watched all of them and I latched on to that Mary Martin Peter Pan video. My child mind didn’t say, “What do I love so much about this petite, androgynous, cocky blonde character. I loved the outfit, I loved the gymnastics, I loved her voice. Then, when I was about 13, I played Peter Pan in a semi-professional children’s theater in Houston. They brought in a flying rig and, yes, they crashed me through the plywood set in front of 1,000 people one night [laughs]. With all this extra time on my hands now, I started reading more about Mary Martin’s personal life. I don’t think it’s nice to speculate about people’s personal lives, but in a less liberated time there was a lot of speculation about her being married to a man and having a bisexual relationship with a friend.

That (situation) sounded very familiar to me when I read that.

You also mentioned the impact of touring with Against Me! and spending time with Laura Jane Grace. Were any or all the songs on Trinidad written as a result of that experience?

[Laughs] no. We had already been writing Trinidad, so it’s not really my coming out album so much. There are a series of songs about my friendship and relationship with Laura Jane which are my solo work. She’s such an inspiring person and she pretty much inspired an entire album from me. I visited Chicago right before the lock down and Laura Jane and I were getting ramen. To the counter person, she addressed me as they. She said, “I’ll have whatever they’re having.” It made me melt inside a little bit. I don’t need somebody else to validate my identity, but if somebody else is going to, Laura’s a good one [laughs].

Merge has a long history of queer artists, including Bob Mould, H.C. McEntire, Imperial Teen and Mark Eitzel, as well as Stephin Merritt and his bands The Magnetic Fields, Future Bible Heroes, The 6ths and The Gothic Archies. What does it mean to you to be part of such an inclusive label?

Yeah, it means so much to me. I’m very influenced by Magnetic Fields, by Stephin Merritt’s ability to write from different characters’ perspectives. It’s very theatrical. I’ve been listening to them forever. It’s also very exciting for me to get on the label and to learn about all these other bands. I met Imperial Teen last summer at the Merge anniversary. They were so lovely and they were amazing performers. I became a new fan and I hope to get to play shows with them. That would be amazing! I think coming up in punk rock, I didn’t really think about what my community was just beyond the rooms in which I would perform. It could be very lonely sometimes. Now that I’m being much more open about who I am, it’s like manifesting something in the universe. I feel like I’m being sent more of a community. Some of it is a long generational community, like what we have at Merge and some of it is meeting other interesting bands with predominantly queer members with whom I can plays shows and spend time with.

Trinidad is being released in late May, shortly before Pride month in June. With Pride celebrations being canceled due to the COVID-19 pandemic, how will you be observing Pride month?

We should definitely do something [laughs]. Lou Reed’s voice, and his song “Vicious,” are coming into my head. I think that maybe in the weird way of performing from home, we may have to have our own one-person Pride parades on virtual forums. That question is making me sweat because it’s very sad. I don’t know if, when all of this began, I was thinking about June. We’re all learning different ways to socialize and perform and be celebratory from our own pods. I feel like Sigourney Weaver in Aliens, flying through space, just coming off cryo-sleep; disoriented. I find it weird and awkward to perform to a selfie camera; it feels like performing to my own miniature reflection [laughs].

These are the biggest Bristol Uni Depop shops

The unparalleled, decade-defining chaos of the 2001 Super Bowl halftime show

Here’s Everything We Know So Far in Illinois – NBC Chicago

Gas Vs. Inertia Shotguns—Which is Better?