This combine-like machine is being used at the Minot Gun Club to recover lead from the soil near the facility’s trap houses. Each white bag is filled with approximately 1,500 pounds of lead BB’s.
Kim Fundingsland/MDN

It’s never been done before, at least not in the fashion it is being done now. A lead removal project is underway at the Minot Gun Club north of the city using a new method and a completely new machine.

“This is the first time this machine has ever been used in the United States,” said Lance Tschetter, Range Recovery Technologies, Huron, S.D. “We’re making sure we get as much lead removed as we can for the club and this is also a test for a proto-type machine.”

Range Recovery Technologies got its start in the lead removal business after building a machine that recovered rifle and pistol rounds from shooting ranges – police, military and other outdoor ranges throughout the U.S. They were contacted by two brothers in Australia who had a contract to remove lead from a military facility in that country and were interested in learning more about RRT’s machine.

“We got over there to show them how to run our machine and they had one they built themselves for lead shot,” said Tschetter during a break from removing lead at the Minot Gun Club. “We went back to Australia and drew the machine up and built it in South Dakota. This is the first one.”

Lead shot is used in shotshells fired by trapshooters breaking clay targets. Shotguns have limited range so the shot falls into the ground just beyond the traphouses. Lead removal was last attempted at the local club sometime in the mid-90’s, but the effort wasn’t very successful. Today though, it is a much different story. 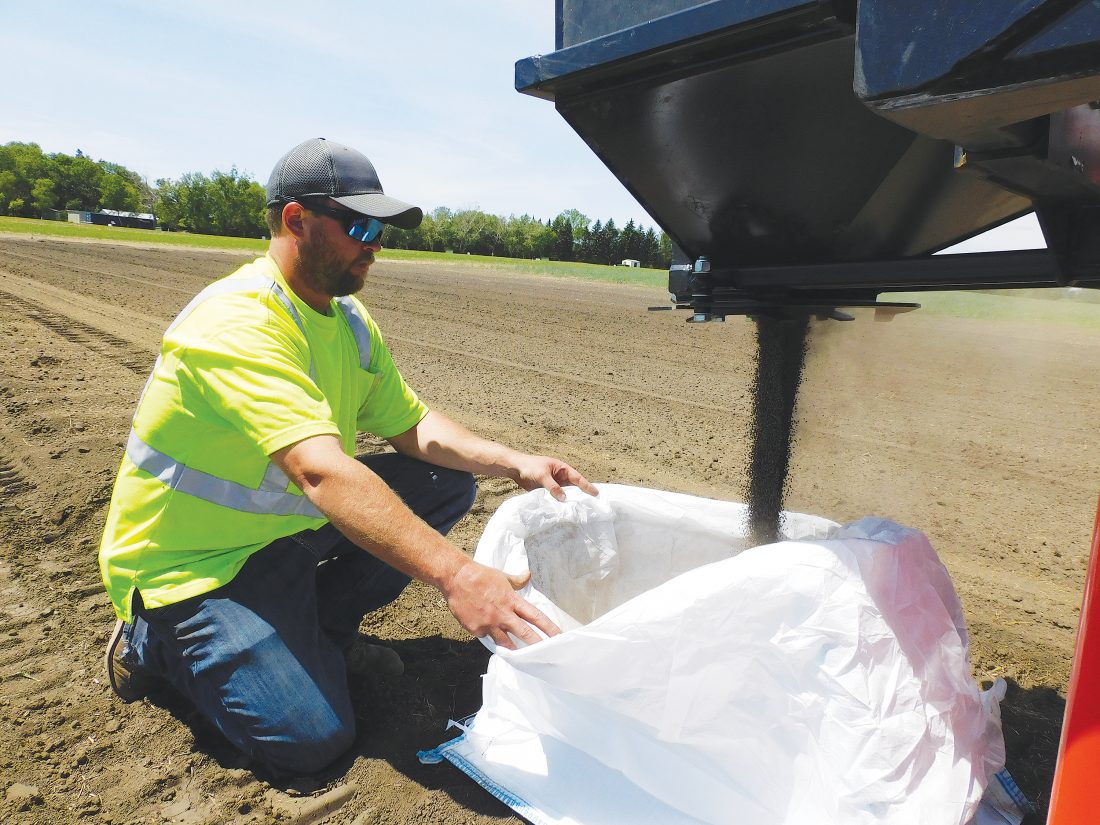 “With this equipment we are so much more efficient. It’s amazing and simple, a great way to clean up shot,” stated Tschetter. “We can clean the ground up relatively fast and get the money back to the club.”

Money comes from the sale of the recovered lead shot.

“No money exchanges hands,” explained Tschetter. “We just share the profits from the sale of the lead. To a club like this one that lead check can be a big thing.”

According to Tschetter, a typical arrangement is a 70-30 split on the sale of the lead with 70 percent going to the harvester and 30 percent going to the club. Halfway through the removal project at the Minot Gun Club this past week, Tschetter said he had recovered more than 100,000 pounds of lead and expected to reach 200,000 pounds before finishing up sometime in the first half of July.

When the lead removal project is completed, said Tschetter, the bags containing about 1,500 pounds of lead shot each, will be sold. The market for lead is currently down somewhat but is expected to rebound slightly by fall. As little as a 10 cents per pound increase could mean thousands of additional dollars for the Minot club.

“The entire lead game is based on weight,” said Tschetter. “Car batteries, tire weights, anything you can think of, is recycled lead or it comes from overseas. There is a company in Missouri located next to a lead mine that was shut down by EPA. They smelt down lead into big ingots and then send it to China where it is refined and sent back in any shape you could possibly want.”

The lead shot being recovered at the Minot Gun Club is a mixture of relatively new shot and shot that has been in the ground for several years. The area where the recovery is taking place is on land that has been farmed and where fertilizer has been applied. Fertilizer speeds up the process of deteriorating lead shot, making some of the BB’s recovered lighter than usual.

“Here we are going almost six inches deep,” explained Tschetter. “In Bismarck the landing zone is just grass. All the lead is in the top inch and a half to two inches. Here in Minot we want to get this cleaned up the best we can and remove as much lead as possible. We are doing what is good for the environment and there is money involved for both parties.”

The process is slow. Tschetter’s combine-like machine scrapes away the soil, augers it onto a sifter which separates the lead from the dirt. The lead is pushed into a hopper and then dumped into bags and sealed.

“We’re hoping this machine changes the game in lead reclamation,” remarked Tschetter. “I call the Australia guys on the cell phone if I need them.”

According to Tschetter, shooting clubs should consider lead removal every eight to 10 years.

“This takes us all over the country. In the lower 48 we’ll go anywhere the work is,” said Tschetter.

Tschetter said his company that built the lead mining machine, Lankota, is working on construction of a second machine. Two machines would make for faster clean-up at a single location or could allow for two separate projects to be underway at one time.

For now though, the proto-type machine in use at the Minot Gun Club is performing very well and, having passed its trial debut, seems destined to be in demand elsewhere.

Submitted Photo
This photo-of-the-week is of our state flower, the wild prairie rose. The photograph was taken last summer by Clarence Marcellais of Bottineau along the shore of Belcourt Lake in Rolette County. The wild prairie rose was approved by the Legislative Assembly of North Dakota on March 7, 1907.

This combine-like machine is being used at the Minot Gun Club to recover lead from the soil near the facility’s trap houses. Each white bag is filled with approximately 1,500 pounds of lead BB’s.
Kim Fundingsland/MDN

Today’s breaking news and more in your inbox


This changes everything. I remember thinking that when the first muskellunge were released into Lake Audubon in …

Fishing Places Near You in the Social-Distancing Era

Fishing Places Near You in the Social-Distancing Era

The Truth About Casting ‘Clueless’