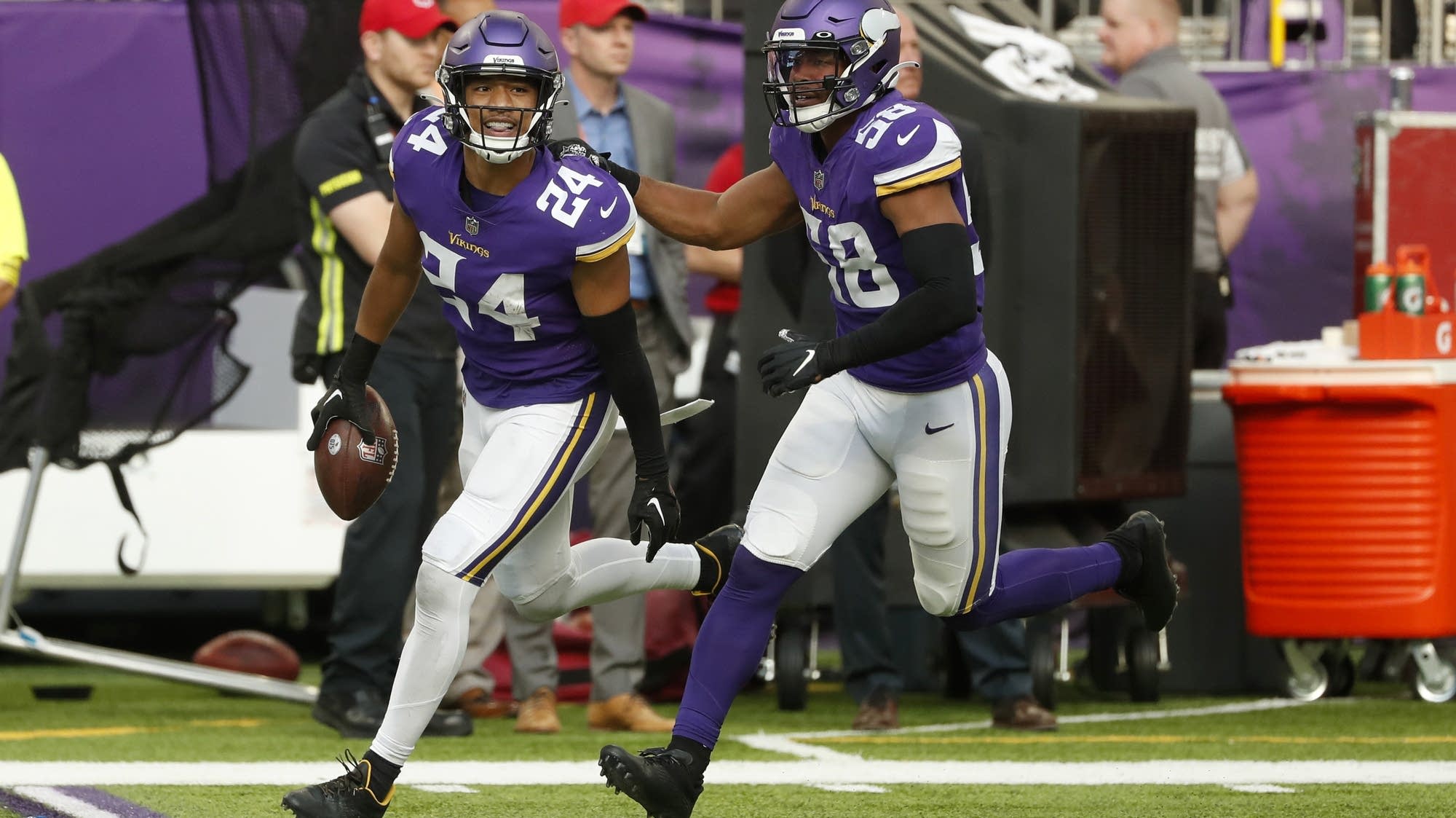 MELISSA TOWNSEND: It’s Minnesota Now. I’m Melissa Townsend in for Cathy Wurzer. It’s time for sports. Let’s turn to experts Wally Langfellow and Eric Nelson. Wally is the founder of Minnesota Score Magazine and the co-host of 10,000 Takes sports talk show. And Eric is the other host of 10,000 Takes and is also the Minnesota Vikings reporter for CBS Sports Radio Eye on Football. Welcome, guys.

WALLY LANGFELLOW: Thanks, Melissa. How are you?

MELISSA TOWNSEND: Nice to hear from you. It feels like this has been a really hot week for Minnesota sports. Am I right?

WALLY LANGFELLOW: Yeah, it’s been really busy. And with the Vikings winning last Sunday and then making a big trade in the middle of the week with the Detroit Lions, they really rise to the top of those headlines. And then they go out and get T.J. Hockenson. He is an elite tight end. He’ll add to their offensive weaponry as they head into Washington to play against the Commanders on Sunday.

And the Vikings right now with a 6 and 1 record, and I know it may be hard to believe for some Vikings fans that this is the real deal but they are 6 and 1. And they are in first place and they have a three-and-a-half-game lead over both Chicago and Green Bay. This is very much unexpected, I think, from the rest of the world, maybe not inside that Vikings locker room. But I think with a 6 and 1 record, you can’t shoot too many holes in it.

A lot of folks are looking at who they played and say, well, you’re playing weaker opponents. You haven’t played anybody. In the National Football League, every win is difficult and at 6 and 1, the Vikings are in great shape and they look like they are on their way to a division title for the first time in four years.

ERIC NELSON: Yeah, Melissa, the opponent, as Wally mentioned, is Washington. And this has really been a dysfunctional franchise for the last 10 to 15 years. In fact, the news broke on Wednesday that the co-owners of the Washington Commanders, Dan and Tanya Snyder, they’ve hired Bank of America Securities to explore the sale of the franchise. And you can bet the NFL wants to see this happen.

It’s been a real toxic situation in DC with this football team that once upon a time was a flagship franchise. They’ve had a ton of success in their past but not recently. The last time they had a winning record was 2016.

ERIC NELSON: And they did make the playoffs in 2020 but they were 7 and 9. Now they’re 4 and 4 now on the season. They have three straight wins and it will be a huge game for Washington because they’re trying to stay relevant in the playoff chase.

And oh, by the way, Kirk Cousins, Minnesota Vikings quarterback, that’s his old team, Washington. So he’s going back to FedEx Field in Landover, Maryland. And I’m sure for Kirk, a lot of water has gone under the bridge. I’m not sure it’s extra motivation but it is a homecoming to some degree. He did play for Washington for many seasons.

ERIC NELSON: Yeah, they got a win over Rutgers. They got a shutout, Melissa, 31-0 at home. And really, they had to win the game because they had lost three in a row. And they started so strong. They were dominant in their first four games. But three of those victories were against cupcakes, teams that just aren’t very good.

They did beat Michigan State on the road. We thought at the time it was a signature win, as it’s turned out, Michigan State is not very good. I think where the Gophers are is if they want to go to a marquee Bowl game, they need to run the table.

They’re at Nebraska Saturday. And Minnesota, and Nebraska, Wisconsin, and Iowa are in the middle of that Big Ten West, two and three records. It’s a scrum. Minnesota’s probably not going to catch Illinois. I don’t think they’re going to go to the Big Ten title game or the Rose Bowl.

But if the Gophers can win out, that would be a pretty good record and I think they would have a slight chance at a New Year’s day Bowl game. And if not playing on January 1, they would at least be in a good Bowl game. But if they start losing more games, they might wind up in New York City at the Pinstripe Bowl.

MELISSA TOWNSEND: Nobody wants that. Wally.

WALLY LANGFELLOW: Yeah, and I think there are some question marks that remain with the Gophers, first of all, at quarterback. Should Tanner Morgan continue to start? I think the right thing to do is to start him certainly against Nebraska because if they do run the table here, if they are able to win out, win the rest of their games, they’ll get a decent Bowl game.

And I don’t know if it’s going to be the Pinstripe Bowl in New York City or where they’re going to land, but should they win out, a record of 9 and 3, that’s nothing to sneeze at. That would be something that I think that they could walk away and say, OK, it’s been a successful season. However, should they lose on Saturday in Lincoln, Nebraska, and it’s entirely possible, as Eric mentioned, they’re bound up in that middle of that Big Ten West and they’re tied right now with Nebraska. So should they lose this football game and then you’re looking at a lower level Bowl game, well, you might as well figure out what you have for next year.

Tanner Morgan has had his chance. He’s quarterback this team for the last– well, this is his sixth year technically. So maybe you go to Athan Kaliakmanis. Maybe you give the freshmen more time so you know what you have going forward.

MELISSA TOWNSEND: Oh, it could be a real opportunity for the young one.

WALLY LANGFELLOW: Yeah, no doubt. No question about it. And I think that that’s something that they have to pick up and look at going forward is what do we have starting next year? And he did show something in the Penn State game. That was not an easy place to play in front of 100,000 people. You’re a freshman, you have never played in a big game like this in front of that type of a crowd and he showed some stuff. He’s athletic, no question.

MELISSA TOWNSEND: So we’re talking about some of these winning games. Now we need to talk about the Wolves, Wally.

WALLY LANGFELLOW: Oh, boy. Oh, boy, yeah. Well, the Timberwolves have gotten off to a auspicious start, let’s put it that way. They’re off until tomorrow. They’ll host Milwaukee tomorrow at Target Center. And let’s not forget, Milwaukee was in the NBA Finals not that long ago when they won it all. But they have now lost their last couple of games.

They’ve got new blood. They’ve got Rudy Gobert in there and they’re trying to figure out how he and Karl-Anthony Towns, better known as KAT, can get along on the floor at the same time. And right now it’s a learning process. It’s early, but it is something they’re going to have to figure out because they have mortgaged the future for Rudy Gobert and trying to get to the top this year or soon thereafter.

MELISSA TOWNSEND: Well, let’s look at tonight. I know the Wild is playing tonight. Eric, what’s happening with them?

ERIC NELSON: Yeah, Melissa, the Minnesota Wild have regrouped. They had a rough start to the season. Their future Hall of Fame goalie Marc-Andre Fleury was getting shelled. The team was allowing 7 goals one night, 7 another night, 6 in another game.

A lot of people thought, oh-oh, this could be a long season. But Minnesota is on a hot streak. The Wild have won five of their last seven. They got a victory the other night over Montreal at the Xcel Energy Center, 4 to 1. Marc-Andre Fleury was very good in goal, stopping 34 of 35 shots. He’s 5-0 and 1 in his last six starts.

Kirill Kaprizov, the Russian superstar, had a couple of goals and now tonight they play the Seattle Kraken. And it’s interesting because when they saw Montreal on Tuesday, that’s the franchise in NHL history that has the most tradition, the most pedigree and has won more Stanley Cups than any other team 24. Now they face Seattle, which has zero tradition. The Kraken, as they’re known, are in their second year. So it’s another winnable game for Minnesota.

One red flag, though, they only had 16,385 at the X for the win over the Canadians. This is a team that’s used to getting a sellout every night. They call it the team of 19,000. Tickets on the secondary market are lower than normal. So I think the wild are trying to win over fans just like all of the other teams in this sports saturated market.

MELISSA TOWNSEND: So before we go, we have time to just talk about the World Series. Game five is tonight, Eric.

But the Eagles are 7 and 0 and the Phillies are on an incredible roll. So both fan bases in Pennsylvania and Texas, they’ve got a lot to tune in to tonight when it comes to the NFL and MLB.

MELISSA TOWNSEND: That’s great. All right, guys. Thanks a lot.

Video: Brown Bear Takes Down Moose Next to Road

Kourtney Kardashian proves she was a Y2K icon in old photos