The Los Angeles County District Attorney‘s Office has taken an interest in a case in which singer John Legend almost had his luxury car stolen this week in what some prosecutors in the office are calling blatant special treatment for a high-profile supporter of District Attorney George Gascon.

Legend was at a recording studio Monday when a suspect attempted to steal his Porsche, TMZ reported. The Los Angeles Police Department told the celebrity news outlet that a man walked up to the vehicle, sat inside, and was looking for the keys or another way to start it.

Security personnel at the studio saw what was happening and called the police. When officers arrived, the suspect allegedly claimed the car was his. He got out and began walking. He was arrested after a short foot chase on suspicion of attempted grand theft auto. 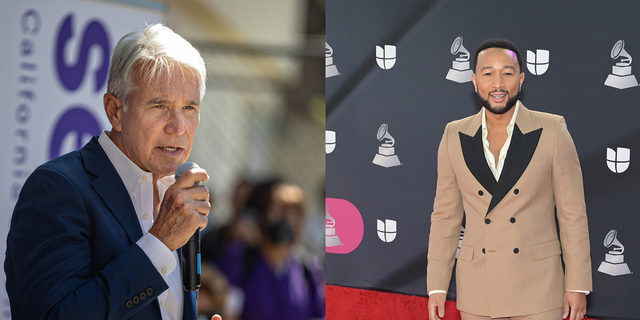 In a Wednesday email to prosecutors, which was obtained by Fox News, John Harlan, the DA’s acting head deputy, said he wanted to be kept in the loop about the case.

“News outlets are reporting that an unarmed person was arrested for attempting to steal John Legend’s Porsche somewhere in Los Angeles – case potentially due today,” the email reads. “Please be on the lookout for this case,” Harlan wrote before asking got be notified via text message along with two others if the case appears in the DA’s records.

“It is the routine practice for the Head Deputy of the Charge Evaluation Division to seek information on all cases generating media interest. Emails such as these are issued pursuant to our media policy and sent, almost on a daily basis, especially where suspect identity is unknown.”

The statement continued: “This helps ensure that the office is better prepared to promptly respond to inquiries regarding cases that are of interest to the public. This matter was treated the same way any media case is treated by the filing unit.”

Fox News Digital has reached out to the LAPD, Harlan and representatives for Legend but has not heard back.

“The idea that a highly senior administrator would be putting out an all-points bulletin to watch out for this case smacks of special access and undue influence,” Lewin said. “To have this kind of action taken is offensive and is an insult to every law-abiding citizen in Los Angeles who is a victim of crime and who is generally met with a lack of interest or outright hostility by this district attorney and his administration.”

“In essence, it appears that the acting head deputy involved put out an all-points bulletin to be on the lookout for this case as if he was tracking the Hillside Stranger,” added Lewin, who won a murder conviction last year against late real-estate scion Robert Durst.

The Hillside Strangler murders in the late 70s were a series of deaths involving female victims who were raped, tortured and killed in the hills in Los Angeles. Two cousins were eventually arrested for the crimes.

Legend is on record as a strong supporter of Gascon and the rights of criminal suspects, Lewin said.

He supported Gascon during his 2020 bid to unseat then-Los Angeles County District Attorney Jackie Lacey. Gascon, who ran on a progressive platform, has since come under fire for many of his directives that critics say enable criminals and has survived two recall attempts.

“George Gascón, our new DA in Los Angeles, just announced some major reforms on his first day,” Legend tweeted upon Gascon taking office. “Proud to have supported his election. This is the kind of change we voted for and the kind of change we need to bring our system closer to true justice.”

He also supported Chesa Boudin, who was ousted as San Francisco’s top prosecutor in June during a recall election, amid a surge in crime.

During the 2022 election cycle, Legend threw his support to several district attorney hopefuls in several states.

“District Attorney elections are crucial to improving our criminal legal system and 2022 is a year with thousands of races,” he tweeted in April.