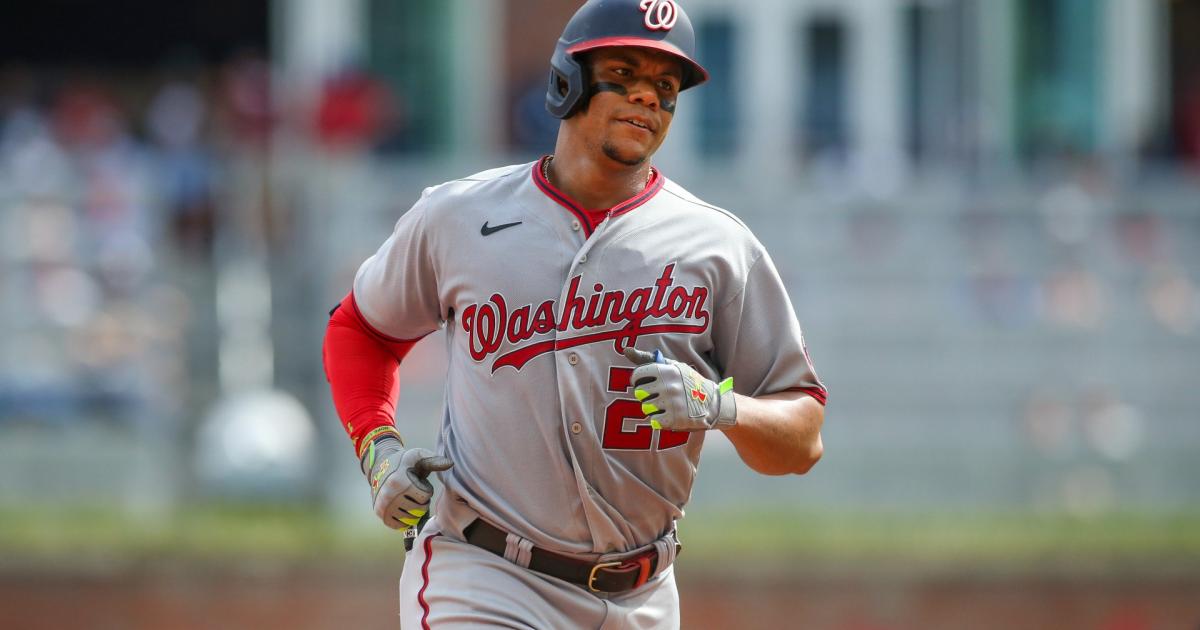 The 2022 MLB trade deadline has the potential to be one of the craziest in recent memory. And it all hinges on one player: Juan Soto.

After Soto declined a 15-year, $440 million extension from the Nationals, Washington has begun actively shopping the superstar outfielder with eyes set on a massive package of prospects as the team looks to rebuild its future.

There is little to no precedent for trading a talent like Soto. Only 23 years old, Soto has received comparisons to Hall of Famer Ted Williams and is under contract not just for all of 2023, but for 2024, as well. His talent, age and several years of team control make him immensely valuable on the trade market.

What is the latest on trade rumors surrounding Soto? The Sporting News takes a look.

MORE: How recent MLB blockbuster deals have fared with Nationals star set to move on

Nationals GM Mike Rizzo is, unsurprisingly, not happy with how the Soto situation has unfolded. On The Junkies, Rizzo said leaks “didn’t help us in anything we’re trying to do. It didn’t help us keep a good relationship with Juan and it didn’t help us with leverage at the trade deadline.”

He also denied any leaks coming from the front office.

Rizzo added the Nationals are in serious talks with several teams who have genuine interest, and he said the Nationals aren’t going to hurt their return by attaching bad contracts to Soto (e.g. Patrick Corbin).

“We’re not going to dilute the return for any player by including a bad contract,” Rizzo said, when @JunksRadio asked him about throwing the Corbin contract into another deal at the deadline.

Passan said a trade seems inevitable for Soto, but it will obviously take a lot to move him. Since Soto is under contract for a long time, there is plenty of time for them to get a deal done and still receive plenty in return. The sooner the trade, the better the value, but a trade in the offseason would still net a massive return.

Seventeen MLB general managers voted on the three favorite destinations for Soto to wind up, and there were few surprises. A plurality (eight) believed the Padres to be one of the destinations, with seven thinking the Dodgers should be one of the three favorites. Three each believed the Cardinals, Mets, Mariners, Rays and Yankees should be among the favorites, while two saw the Giants as a potential favorite. The Blue Jays, Brewers, Cubs, Rangers and Red Sox. Eight of 15 general managers thought he will be traded by the deadline.

While certainly not overly indicative of any pending moves, this type of survey is a decent temperature check on where the league believes Soto could wind up heading, and when he could be heading there. The NL West certainly appears to be in a strong position to secure Soto with the Padres and Dodgers both appearing on at least seven of 17 lists, while most of the other familiar names that have come up rounded out the list.

Everyone that makes a phone call to Nationals general manager Mike Rizzo will almost certainly be asking about Soto, but that doesn’t mean that’s who Rizzo wants to move first. SNY’s Andy Martino reported that a league source believes Rizzo wants to deal first baseman Josh Bell before turning to deals on Soto.

Bell has been a solid contributor for the Nationals this season, as he has 13 home runs and a .884 OPS through 96 games that trails on Soto’s .885 through 94 games. Bell should be another popular trade candidate ahead of the deadline, and should net the Nationals a solid return.

Not the Yankees, not the Mets, not the Dodgers, but the Cardinals are believed to be potential frontrunners to land Soto. Rival executives believe the team’s farm system, which has top-tier talent like Jordan Walker, Matthew Liberatore and Masyn Winn, would have the star talent and depth needed to pull off a deal for Soto.

On top of the prospects, St. Louis also offers other young talents like outfielders Tyler O’Neill, Harrison Bader and Dylan Carlson, as well as second baseman Nolan Gorman, who all possess multiple years of team control and would be around for a Nationals’ rebuild.

Perhaps instead, it’s the Padres that are the frontrunners for Soto. One executive told The Athletic’s Ken Rosenthal that San Diego “is as likely as the other 28 teams combined” to acquire the young phenom. The Padres’ farm system has been depleted recently with prospects like C.J. Abrams and Mackenzie Gore being called up, but either could still be involved in a trade package, along with other top prospects like Robert Hassell III or James Wood.

At this point, it is still likely too early to glean too much from potential frontrunners. As Heyman and Sherman noted, there have been at least a half-dozen teams inquire about Soto, though they noted the Nationals are focused on one or two teams.

Nationals not impressed by early offers

And this is why it’s still likely too early to read into talk of frontrunners. The Athletic’s Brittany Ghiroli reported that while the Yankees are involved in the discussions for Soto, the Nationals “haven’t been impressed with early offers.”

As Ghiroli notes, that doesn’t mean a deal won’t get done. Given how franchise altering a move for Soto will be for both the Nationals and whichever team winds up landing him, it will take time for two sides to come together on a move.

As would be expected for a team in a rebuild, the Nationals are not looking for win-now type players. Rosenthal, appearing on Fox Sports, reported Washington is looking for “four to five top, young players” in a mix of prospects and active major leaguers that have years of control.

The ask for Washington makes sense. With a young foundation of players like Keibert Ruiz, Josiah Gray, Lucius Fox, Luis Garcia and Carter Kieboom, as well as prospects coming up the minors like Cade Cavalli and Brady House, the Nationals are looking further down the road than the next two seasons to compete.

MORE: Soto says ‘you don’t know what to trust’ amid uncertain future

Seven teams in early on Soto

There are likely to be a number of suitors for Soto as any team that believes it would have a chance to compete in 2022, 2023 or even 2024 could be enticed to make a bid for the phenom. Of course, it will require plenty of prospect capital, which will be an obstacle for some teams.

Ahead of the 2019 season, the Nationals signed Patrick Corbin to a back-loaded, six-year, $140 million deal. Now, they want to be rid of the contract. The Athletic’s Jim Bowden reported Washington would look to package Soto with Corbin to remove the contract from its books.