Democratic nominee Joe Biden and his wife Jill Biden will travel to Kenosha, Wisconsin on Thursday, two days after President Donald Trump made the trip.

The Biden campaign said that the former vice president will ‘hold a community meeting in Kenosha to bring together Americans to heal and address the challenges we face.’ Afterward, both Joe and Jill Biden will make a ‘local stop.’

Biden had hinted on Monday after delivering a speech in Pittsburgh that he was considering going to the  Wisconsin city, where the police shooting of Jacob Blake a week and a half ago has led to protests, riots and unrest.

Biden’s campaign has already reached out to Jacob Blake’s family and plans to meet with them Thursday when he travels to Kenosha with his wife, Jill Biden, the Blake family told DailyMail.com.

‘Biden’s contacted the family,’ said Jason Blake, Blake’s uncle. ‘They’ve had a phone conversation with my brother. I’m sure they’re going to make their way to meet with my family.’

‘We want someone in the White House that will unite the whole country,’ he added. 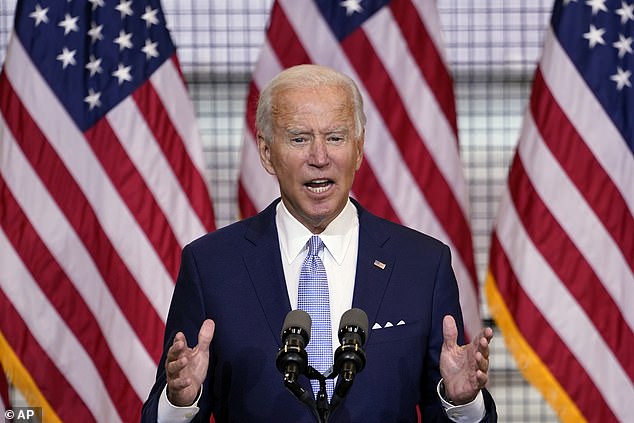 Joe Biden will visit Kenosha, Wisconsin on Thursday for a ‘community meeting.’ During his trip to Pittsburgh on Monday he hinted a trip to Wisconsin was in the works 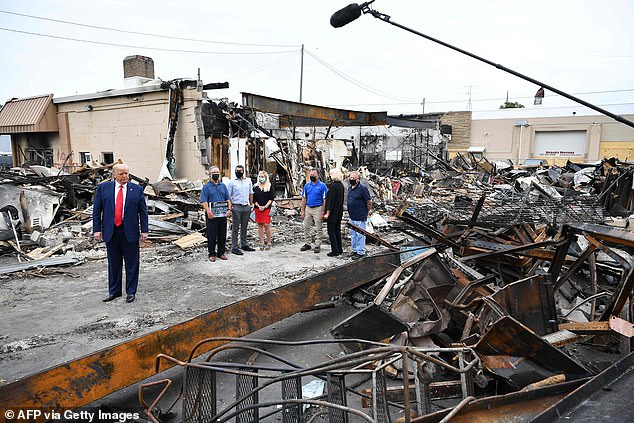 ‘We believe Biden is trying to united all Americans. I’m grateful to be able to meet him. I’m going to demand from him what we demand from anyone else – that there be legislation and laws protecting African Americans’ safety and well being and that we have economic opportunity to build up our own communities.’

‘We appreciate the manner and approach his campaign are taking,’ he continued.

Trump during his own visit to Kenosha on Tuesday did not meet with the Blake family, nor utter the paralyzed black man’s name.

Instead he toured property damage and held a roundtable discussion with law enforcement and local officials.

There, he called rioters ‘domestic terrorists’ and suggested that white police officers who shoot or kill unarmed black people ‘choked’ or are ‘bad apples,’ refusing to believe there’s a systemic problem between law enforcement and America’s black community.

‘They’re incredible, yet many politicians ignore their sacrifice and ignore the African-American, Hispanic-American victims,’ the president continued, speaking of crime victims of color, not those who have been unarmed and shot by officers, which have inspired weeks of Black Lives Matter protests.

When asked specifically about Blake being shot Trump responded, ‘I feel terrible for anybody who goes through that.’ He added that it’s a ‘complicated subject.’

Vouching for police officers Trump explained, ‘you have people who choke.’

‘And if they make a wrong decision one way or the other, they’re either dead or they’re in big trouble,’ Trump continued. ‘And people have to understand that. They choke sometimes. And it’s a very tough situation.’

The president suggested that the police involved in the shootings and killings of unarmed black people amounted to some ‘bad apples.’

Trump pooh-poohed a reporter’s question about whether he believed systemic racism existed, which has been the main theme of the Black Lives Matter movement.

‘You just keep getting back to the opposite subject,’ Trump said. ‘We should talk about the kind of violence we’ve seen in Portland and here and other places, it’s tremendous violence.’

‘This is what this is all about,’ Trump said.

He laughed off the idea that most of the Black Lives Matter protests have been peaceable, pointing to the rubble he had just observed.

‘I keep hearing about peaceful protests … and then I come to an area like this and the town is burned down,’ Trump said, sassing at reporters in the room for covering the protests like that. ‘By and large this is not peaceful protesting,’ he later added.

State and local officials had asked Trump not to come to Kenosha, in case his appearance sparked more confrontations – but Wisconsin is a key swing state in the November presidential election.

Shop The Tennis Skirt Trend From Depop To TikTok

Shop The Tennis Skirt Trend From Depop To TikTok

Top Countries That Tick All the Boxes

South Dakota Attorney General, an Army Reservist, Allegedly Hit a Man With His Car But Reported Hitting a Deer