With the exposure that comes with online traction, some female users feel trapped as they attempt to find their way as creators in a limiting culture 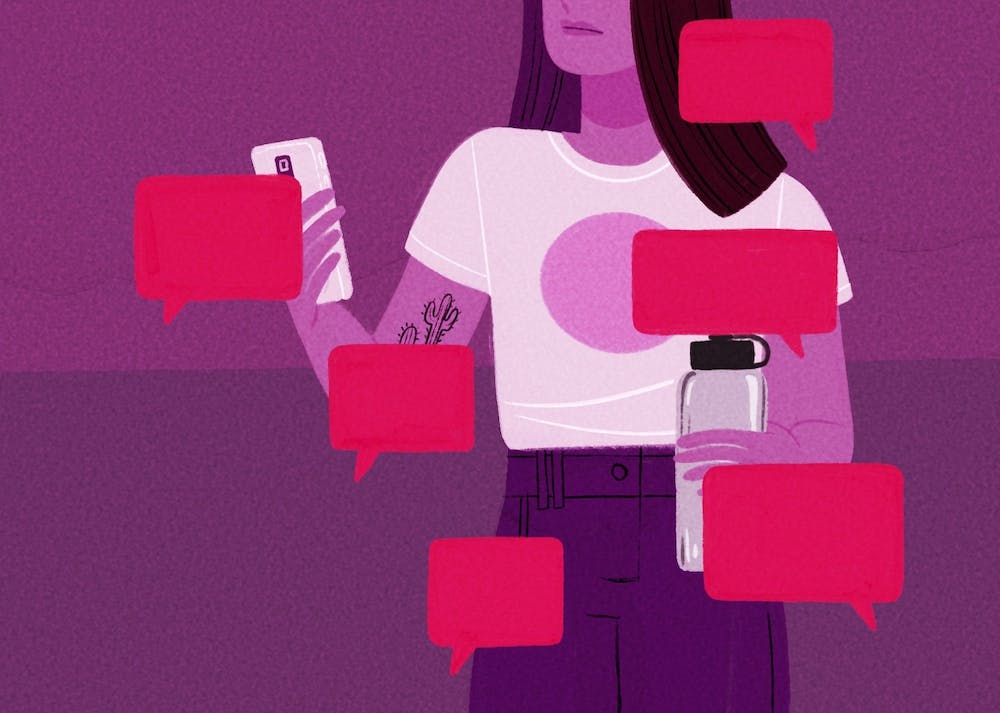 “A misogynistic culture is able to conform to social media because the internet is ubiquitous and public,” Erin Meyers said. Illustration published on Wednesday, March 24, 2021.

With an audience of over 100,000 followers, Shayda Aliabadi, a TikToker and freshman studying psychology, is no stranger to criticism. For her, TikTok initially started out as an expressive outlet without the judgment of those she knew in real life.

“I was making jokes into a void because I felt comfortable knowing no one would know me in person,” Aliabadi said.

However, this safe space was quickly infiltrated as her videos gained more traction — Aliabadi and her content started to get criticized and judged, mostly by misogynistic users, she said.

“Once my content reached audiences outside of what was intended, the judgement became more intense,” Aliabadi said. “Just because people have different opinions from you, they feel the need to criticize in an unproductive way.”

And she isn’t the only woman who witnesses this kind of treatment — I might not have a follower count in the thousands, but online criticism hits me just as hard.

For me, the internet is simultaneously a place of escapism and a place of trial. While I love finding new passions and ways to express myself, I feel cut short at the fear of being labeled “unoriginal” or “trying too hard” for taking inspiration from other girls online.

The frustration truly begins to rise when I start to criticize myself before others get the chance to. While I would love to post pictures from last weekend’s farmer’s market, I’m scared others will think my outfit is a carbon copy of one off Pinterest or that it tries too hard to follow the “cottagecore aesthetic.” I often struggle to create captions for my Instagram posts since I worry people will consider them eye-roll-inducing and cringe-worthy.

When I see other people get criticized on the internet for those same things, I can’t help but fear that I’ll be next. Unfortunately, this leads to my own internalized critic that just won’t seem to go away.

But these feelings and fears are nothing new, according to Erin Meyers, an assistant professor of communication at Oakland University. The root of this problem only seems to grow and adapt through each generation, she said.

“A misogynistic culture is able to conform to social media because the internet is ubiquitous and public,” Meyers said. “These ideas find a new way to get added to the public, often in ways that seem like joking but are actually reinforcing the ideas on a platform that people can’t help but engage with.”

Many female-driven trends have taken the world by storm — Y2K girls, Tumblr girls and the more recent VSCO and Alt girls. Many of these trends have been chances for girls and women to indulge in their passions and come together under common interests.

I’d be lying if I said none of these trends intrigued me. From 2014 to 2016, the Tumblr girl aesthetic was everything I wanted to be. Listening to Arctic Monkeys while wearing outfits from American Apparel was the pinnacle of cool to me.

As much as I admired the girls who became the foundation for this trend, I never outwardly participated. I would admire from afar, but I was too afraid to actually partake for fear of judgment.

These girls didn’t necessarily fit into the “typical mold,” which led to criticism of them trying too hard to “not be like other girls.” So what did that mean for me if I wanted to be like those girls?

It was better not to find out.

Meyers said this cultivates a narrow view of femininity that only furthers this criticism so that women and girls are limited in their expression.

“It’s constantly changing — you need to look a certain way, this is what a girl should do. In fulfilling this narrow view, women are given the only form of power that society gives them,” she said. “It’s limited but gives them approval from a judging world. Policing those boundaries is a way for society to continue to limit the power we get.”

This traps female users into a deeper box where they can’t help but feel restricted as they attempt to find their way in a culture designed to limit them, Meyers said.

“There are a lot of ways in which girls are judged by how they express femininity,” she said. “The fact that those ways change all the time proves the struggle of women trying to find power and a place in society and upholds patriarchal values that have always told us to be a certain way.”

As I make my routine scrolls through social media, I can see this phenomenon clearly. I see the comments that call into question the legitimacy of a woman’s expression with no evidence, even when the woman does nothing to provoke it.

By being aware of this criticism and preventing myself from feeding into these online anxieties, I’ve made my existence on the internet a much less defining one. Criticism won’t go away anytime soon, but by giving it less power, the flame starts to dwindle.

2 NC toy stores offers customers a blast from the past

2 NC toy stores offers customers a blast from the past

7 Easy ways to win more affection from your partner