Roberto Alvarez doesn’t know how he contracted the coronavirus this month. But within a few days of him getting sick, the virus had spread through his family’s two-bedroom apartment in Redwood City, infecting his mother and older sister.

The virus spared Alvarez’s father, who slept on the couch for three weeks while the rest of the family quarantined in the bedrooms. But isolating completely was impossible for any of them. The family shared the bathroom and kitchen, wiping down surfaces before and after each use.

“It was pretty tough on my family,” said Alvarez, 23, a contract employee for Facebook and community organizer. “Once my family got sick, we had to clean the house every day for my dad to be able to come in. That was also pretty heavy on my dad as well, the fear of getting COVID.”

Alvarez’s mother, a housekeeper, and his sister, a secretary at a dental office, each missed two weeks of work with no pay, he said. None of them required medical treatment for the virus, a relief for the family, according to Alvarez, who said his parents are uninsured.

As the latest coronavirus surge rages across the state, overwhelming hospitals and ravaging entire families, low-income communities of color again have proved particularly vulnerable to contracting the virus.

Health experts say the same factors that made them more susceptible to the virus early in the pandemic — living in crowded housing, working essential jobs, difficulties isolating and, in some cases, having no easy access to testing — have resurfaced as case numbers and deaths climb at stunning rates.

Latinos account for 56% of the state’s coronavirus infections and 48% of deaths — the most of any ethnic group — though they make up 39% of the overall population, according to state data. Black people, who account for 6% of California’s population, make up 4% of cases and 7% of deaths.

Black, indigenous and Latino residents have death rates of more than 2.7 times that of white people nationwide, according to the APM research lab, which has tracked coronavirus deaths across racial groups since the beginning of the pandemic.

In the fall, the Bay Area appeared to be making inroads in addressing disparities in coronavirus cases, particularly after the state introduced its health equity metric, designed to protect disadvantaged areas hardest hit by the pandemic. 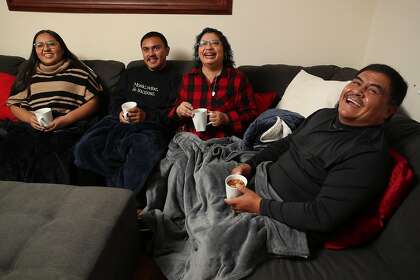 Under the metric, counties must ensure that positive test rates in their most disadvantaged neighborhoods do not significantly exceed the county’s overall positive rate.

The state uses a public health tool called the Healthy Places Index to identify the lowest quartile, or disadvantaged communities. The index is based on census data on 25 socioeconomic factors, such as income, health care access and education levels.

The metric forced counties to immediately address numerous racial and socioeconomic disparities, though in recent weeks it has taken a backseat as the state focuses on controlling case counts and keeping ICU beds open.

San Mateo County health equity officer Shireen Malekafzali said the surge is so widespread that the burden on low-income and the most exposed communities has only grown and “in many ways is reversing the gains that we had been making.”

Malekafzali said the virus is “pulling in on the same structural factors that created the challenges for our low-income communities and communities of color to start.” 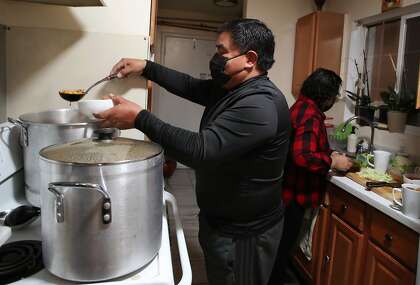 San Mateo County has seen the steepest rise in COVID-19 cases among white and Asian residents and young people between the ages of 20 and 39. But the highest burden of exposure remains among Latino and Pacific Islander residents, she said.

Several factors have worsened the surge in these communities, said Dr. Kirsten Bibbins-Domingo, who chairs the department of epidemiology and biostatistics at UCSF.

“One is, when there’s a surge, it’s actually harder to find testing around, to find adequate tests,” Bibbins-Domingo said. “There’s also delays in getting the test results back. Not having testing readily available in the communities that are disproportionately affected, it creates a problem.

“And any lag in getting your test results back — if you’re in an environment where you have the potential to infect many more people — it’s going to also disproportionately impact the communities we’re talking about.”

San Francisco officials opened a pop-up testing site last week at the 24th Street Mission BART Station for Latino residents and essential workers in the area. They wanted to increase access to testing during the holidays in a neighborhood that has been disproportionately affected by the virus throughout the pandemic. 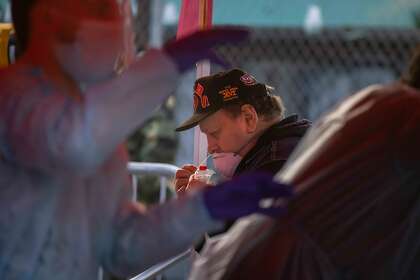 Roughly 600 people were tested at the site Wednesday, according to Jon Jacobo, the health committee chair with San Francisco’s Latino Task Force.

Last month, several counties reported an increase in cases among white residents and a decline in cases among Latino residents for the first time since the pandemic hit, signaling a dramatic shift in who — and what — was driving infections.

The trend emerged weeks after counties began easing restrictions in many places, including reopening indoor dining and increasing capacity at gyms and places of worship. That prompted many people to let down their guard and expand their social bubbles, county health officials said.

But the latest data demonstrates a reversal, with vulnerable communities again at the center of the surge, creating significant challenges for county and state health officers as they map out a pandemic response for next year.

“Throughout the pandemic, we have seen a disproportionate impact on our historically disadvantaged communities, especially the Latinx population. This trend has continued during the recent surge, although the disparity isn’t as large as during the summer wave,” Contra Costa’s Health Services agency said in a statement.

The county recorded an overall positivity rate of 8.7% last week, compared with 13.5% in its disadvantaged communities. On July 28, the positivity rate in the county as a whole was 7.3% and 14.5% in these communities, the health services agency said.

As community transmission rises, it’s not surprising that rates have increased in step in the densest and most disadvantaged neighborhoods, Santa Clara County’s Emergency Operations Center said in a statement.

The county said it is continuing community outreach, with specially trained health workers engaging with residents and businesses. It also has established testing sites in hard-hit neighborhoods to ensure access, and has several partnerships with community organizations to educate residents about testing, COVID-19 resources, and programs that distribute face masks, hand sanitizer and sanitizing wipes.

Alvarez said the precautions that many people can take to stay safe — like sheltering in place — aren’t always possible for low-income families.

“Work doesn’t stop,” he said. “Being able to socially distance and having gloves and masks on all the time, it’s quite a privilege and sometimes we kind of take that for granted.”

Why US Crypto Exchanges Aren’t Playing Ball With the IRS