how close are we to a Covid-19 vaccine, what is the testing process? Coronavirus (Covid-19) Vaccine Latest Update: Even as the Covid-19 pandemic has set off an unprecedented response among the global scientific community to find a vaccine, the race is set to kick up a notch from next month as three candidates — the ones developed by Moderna Inc, China’s Sinovac Biotech and UK’s Oxford-AstraZeneca — are set to enter late-stage trials.

According to the World Health Organization’s latest count, 13 experimental vaccines are being tested in humans and more than 120 others are in earlier stages of development even as the infections near nine million, including 468,484 deaths. China has six candidates undergoing human trials, the maximum.

If all goes well, we may have a vaccine for emergency use by November even though experts have said getting regulatory approval followed by mass production and supply chain issues may push the development into next year.

The World Health Organisation’s (WHO) Solidarity Trial, the UK’s RECOVERY Trial and the US’s ‘Operation Warp Speed’ are three of the leading scientific efforts pivoting research in the battle against Covid-19.

? What are the stages in development of a vaccine?

Firstly, a new vaccine candidate has to pass testing in animals, following which clinical trials kick in. Then, over three phases, the vaccine candidate’s safety and efficacy are tested as per protocols. A fourth stage involves collection and analysis of post-marketing data.

Pre-clinical tests: In this primary stage, scientists test the vaccine on animals such as mice or monkeys to see if it produces an immune response.

Phase I trials: This is the first step where the experimental vaccine is given to humans, usually between 20-80 subjects, to test safety and dosage and check whether it stimulates the immune system.

Phase II trials: In this stage, a larger group of several hundred individuals are enrolled for testing and they are split into groups age-wise such as children and elderly. The Phase II testing studies the candidate vaccine’s safety, immunogenicity, proposed doses, schedule of immunisations and method of delivery.

Phase III trials: Since certain side effects may not surface in the smaller groups of humans tested in earlier phases, the vaccine candidate is given to thousands of people in this stage. Here, the scientists check how many become infected compared with volunteers who receive a placebo. These trials can determine if the vaccine protects against the coronavirus.

Approval: After Phase III trials, the vaccine developer submits a license application to the regulatory authority in their respective country. The regulator then inspects the factory where the vaccine will be made and approves its labeling.

During a pandemic, a vaccine may receive emergency use authorisation before a formal green signal. ? What types of Covid-19 vaccines are being developed?

With limited time in their hands, scientists are developing some vaccines from scratch and some from existing molecules developed for other diseases. What has aided the research is the fact that the novel coronavirus is from a family on which work is already being done worldwide after SARS and MERS.

Genetic vaccines: These are the vaccines that use the genes of the coronavirus (in the form of DNA or RNA) to provoke an immune response.

Viral vector vaccines: These vaccines use a virus to deliver coronavirus genes into cells and provoke an immune response. These viruses are weakened so they cannot cause disease.

Protein-based vaccines: These vaccines use a coronavirus protein or a protein fragment to provoke an immune response by mimicking the coronavirus’ outer coat.

Whole-virus vaccines: Such vaccines use a weakened or inactivated version of the virus. These vaccines are created by inactivating a pathogen, typically using heat or chemicals. This destroys the pathogen’s infectivity while retaining immunogenicity. ? Which Covid-19 vaccines are the top contenders and have shown promise?

Even though most of the over 120 vaccines under development are undergoing Phase II clinical trials, only two of them are in combined Phase II/III trials.

Being jointly developed by British-Swedish company AstraZeneca and the University of Oxford, the AZD1222 vaccine, based on a chimpanzee adenovirus called ChAdOx1, is beginning Phase II/III testing in the UK and Brazil. AstraZeneca has already started to mass-produce the vaccine candidate and plans to roll out up to two billion doses of a coronavirus vaccine in September.

The firm has signed deals to produce 400 million doses for the US and 100 million for the UK if it is successful in human trials.

US firm Moderna Inc is developing a vaccine, part of US’ Operation Warp Speed, using messenger RNA to produce viral proteins. Final-stage trials of the mRNA-1273 vaccine is set to begin next month on 30,000 people and the firm hopes to have vaccine doses ready by early 2021.

Earlier this month, preliminary information revealed that a series of studies in mice has lent some assurance that it may not increase the risk of more severe disease and that one dose may provide protection against the novel coronavirus. 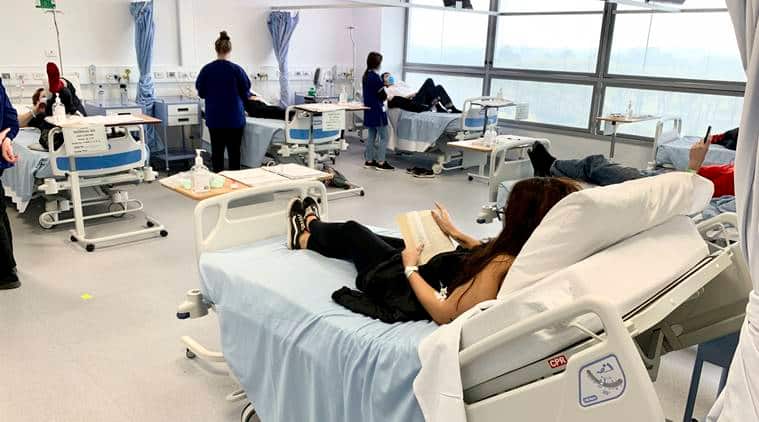 Pharmaceutical giant Pfizer, which is co-producing a Covid-19 vaccine with the help of German company BNTECH, has started the process of dosing patients. Four vaccine candidates based on messenger RNA (mRNA) format are being tested on volunteers. The tests are currently going on in Germany and parts of the US. Pfizer believes that a Covid-19 vaccine could be ready by the end of October 2020.

The vaccine candidate developed by Imperial College London researchers is based on self-amplifying RNA technology and over 300 healthy people have been immunised with two doses. The vaccine has been backed by 41 million pounds in government funding. A further trial involving 6,000 people is planned for October and if these prove successful, Imperial hopes the vaccine could be distributed in the UK and abroad early next year.

The Beijing-based company is testing an inactivated vaccine called CoronaVac and is preparing Phase III trials in China and Brazil. Preliminary findings from phase I and II trials in China have shown that its shot is safe and capable of eliciting an immune response from human trials. Sinovac’s research and development subsidiary has received $15 million from private equity firms Advantech Capital and Vivo Capital to fund the development of the vaccine.

Chinese vaccine company Cansino Biologics Inc has claimed in a paper in The Lancet that its vaccine candidate, based on an adenovirus called Ad5, was able to generate an immune response against the virus. However, as per the study, about 81 per cent of all the participants showed at least one adverse reaction to the vaccine within the first seven days.

US biotechnology company Novavax has kicked off human trials of its protein-based NVX-CoV2373 vaccine for Covid-19 in Australia. The results of the first phase of clinical trials in Melbourne and Brisbane are expected to be known in July following which thousands of candidates in several countries would then become involved in a second phase.

Animal testing suggested the recombinant vaccine is effective in low doses. Novavax is planning to manufacture at least 100 million doses this year and 1.5 billion in 2021.

German biotech firm CureVac has started human trials of its coronavirus vaccines, involving 168 healthy volunteers. The firm is using a new technology based on mRNA, a type of genetic material never before used to make a vaccine.
Earlier this month, the German government said it was spending 300 million euros to take a 23-percent stake in the firm.

American firm Johnson & Johnson has fast-tracked the start of human clinical trials for its recombinant Ad26.COV2-S vaccine by two months to the second half of July. The company is also in talks with the National Institutes of Allergy and Infectious Diseases(NIAID) to start larger, late-stage trials ahead of schedule. In March, J&J signed deals with the US government to create enough manufacturing capacity to produce more than 1 billion doses of its vaccine through 2021, Reuters reported.

? The Indian Express is now on Telegram. Click here to join our channel (@indianexpress) and stay updated with the latest headlines

For all the latest Explained News, download Indian Express App.

India Must Not Drop Out of Crypto Arms Race

India Must Not Drop Out of Crypto Arms Race

We should be washing our scrunchies at least once a month. Yes, really.