grough — To sunny Birmingham, for an indoor look at the wide world of the great outoors 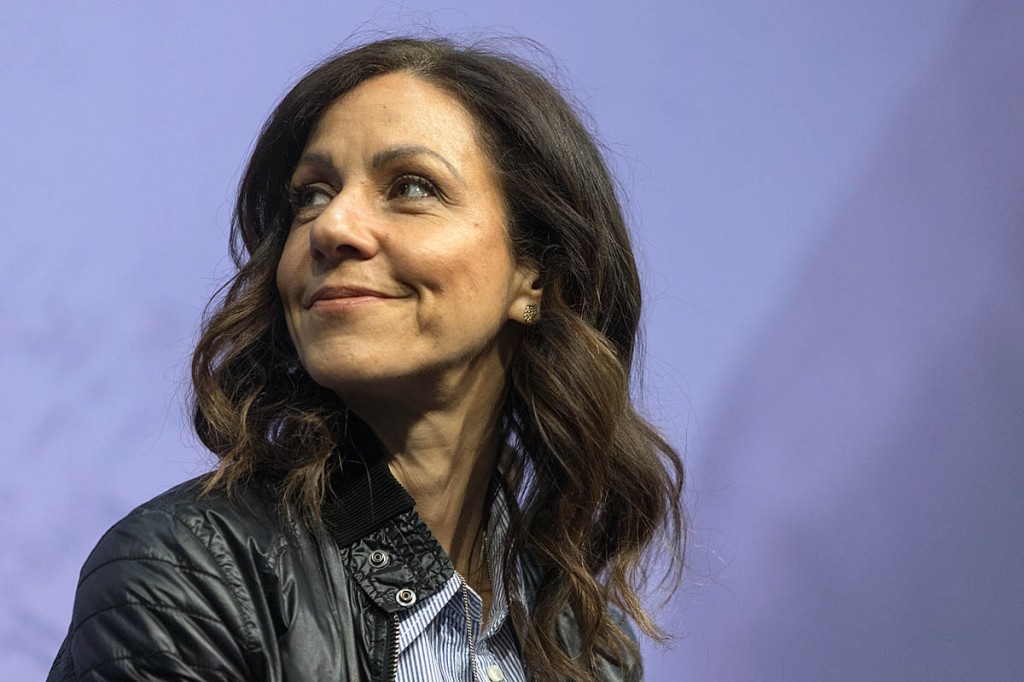 And so to Birmingham, for an indoor taste of the outdoors.

After weeks of blustery, wet weather, the sun was shining the sky devoid of cloud. But it was time to remove the sunglasses and head into the cavernous hangars of the National Exhibition Centre.

The inaugural National Outdoor Expo was finally opening its doors, after Covid-19 lockdown initially scuppered plans to hold the event, as it did many other indoor gatherings.

Yet that lockdown and the obstacles to holidaying abroad meant the UK public had rediscovered its own countryside and the fact you could indulge in all sorts of outdoor activities rather than slapping on the suncream and basting yourself on a Mediterranean beach.

So, despite the delay, March 2022 seemed an opportune time to stage a showcase for the outdoors. There’s a history here: the old Outdoors Show was held at the NEC between 2002 and 2010 before a move to London’s Docklands that didn’t go down well with many outdoor fans.

Organisers of the 2022 expo, Raccoon Events – not the organisers of the earlier events – had sensibly distributed plenty of free entry tickets for the show, to minimise the risk of an empty hall. And it worked both Saturday and Sunday saw big crowds and happy exhibitors. 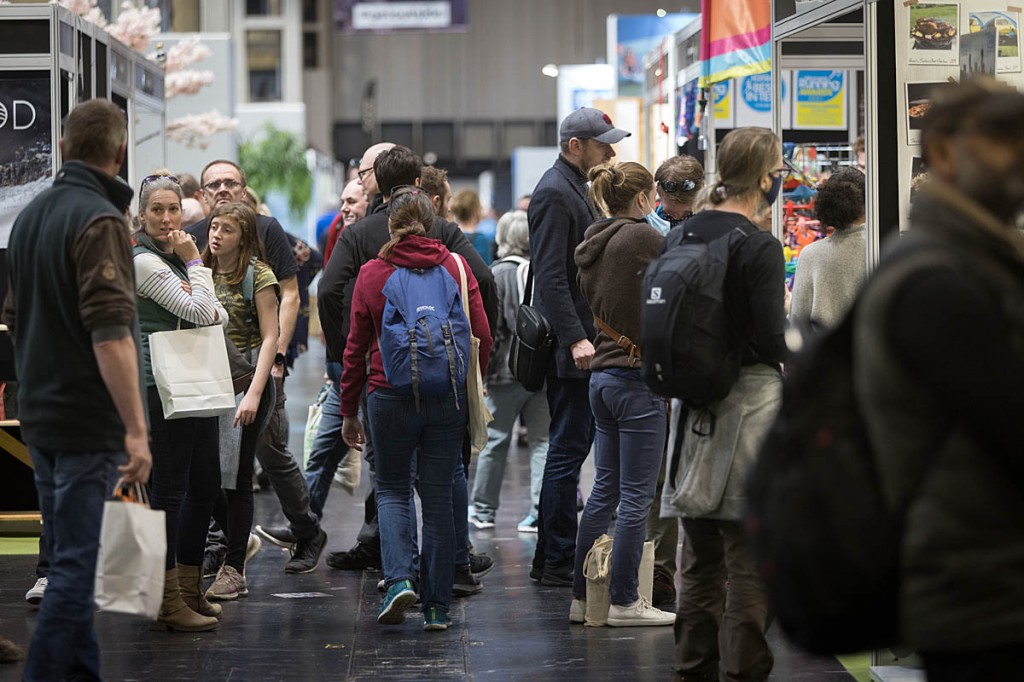 I think there’s a secret gadget freak lurking within many outdoor enthusiasts, and there were enough stands with retailers and advisers to satisfy most gear lovers eager to get their hands on the glittering goodies on show. But what struck me was the possibility, too, that people’s eyes might have been opened to the varied activities you can get up to in the great outdoors, beyond the more common pursuits.

Walking and climbing are the obvious ones, but the expo also showcased running, paddlesports, camping, glamping, outdoor cooking, training and fitness and map reading. For those who wanted to increase their adrenalin levels, there was an indoor zip wire. An indoor wall set-up was attracting a lot of young would-be cragrats, and a few not-so-young climbers.

On that subject, it was heartening to see that the hall wasn’t populated entirely by people like me – grey-haired ageing men – but there was a welcome diversity of visitors, from families with youngsters, to people from ethnic-minority communities, to women of all ages and sizes plus, of course lean athletic types who can tackle an E6 route without pause or steam up the fell with a cheery greeting as they pass the likes of a 65-year-old slightly overweight heavily breathing walker (me again).

Kudos too, to the open-water swimmers in the NEC’s lake. It might have been sunny, but the wind was still cool and the water looked even cooler.

And who doesn’t love a challenge? Maybe that’s why we head for the outdoors. How fast can you inflate and pitch a tent with air beams? Or hang for longer than anyone else from the strength-building gear on the climbing stand? 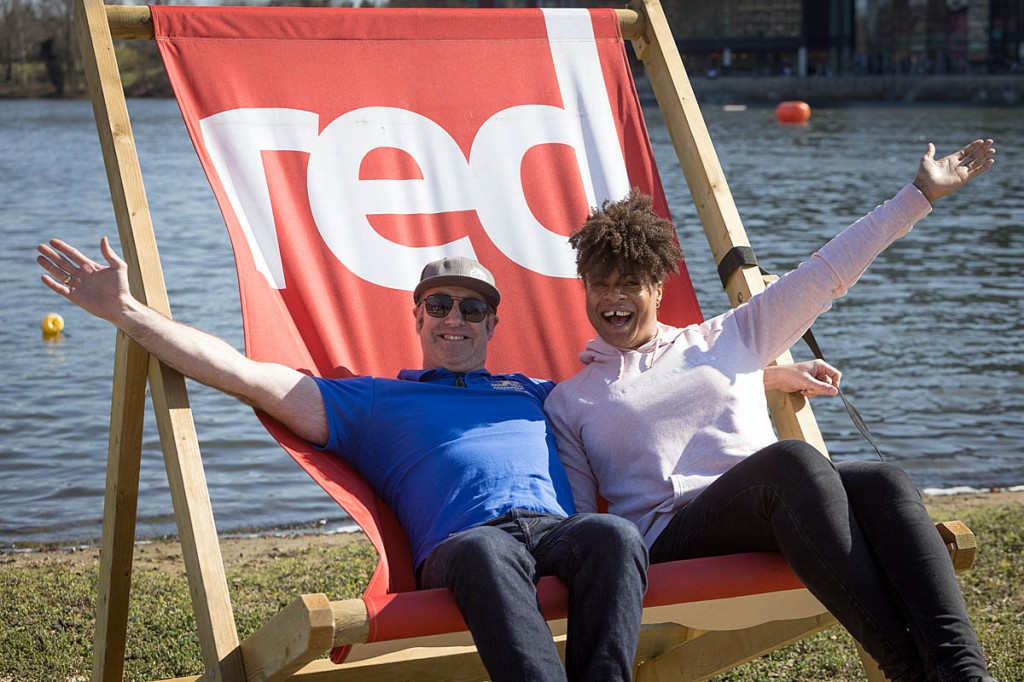 There was a very popular surf-board version of the ‘bucking bronco’ challenge and, of course, the chance to beat your mate to the top of the climbing route.

Sure, there were a lot of stands selling clothing, gear, accessories and all the other goodies outdoor fans love, but there was a lot of participation stalls too, from camp cookery sampling, to bushcraft, to stand-up paddleboarding, to map-reading.

I didn’t see many bored-looking kids traipsing behind parents. Keeping them engaged in the activities seemed to work well. Maybe a lesson for when we’re actually outdoors.

It’s fair to say that many outdoor enthusiasts will tackle more than one discipline; climbers will often also be hillwalkers; or mountain bikers; or open-water swimmers. How many visitors to the expo will have been tempted to take on an activity they might not even have been aware existed?

And in a way, that’s the beauty of an event such as the National Outdoor Expo. It represented a knotting of many strands of the burgeoning outdoor industry rather than concentrating on one or two aspects of leisure time in the great outdoors.

And if it sparks the interest of a few younger and new-to-the-outdoors visitors to explore more, then I think that’s all to the good. 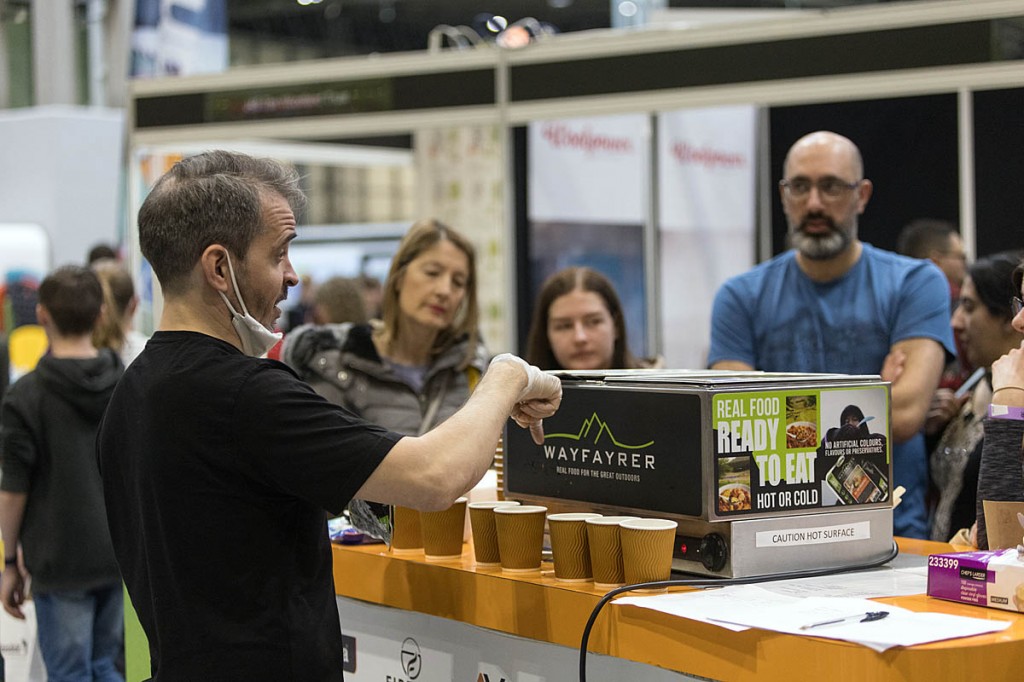 On that score, there were some informative talks on the stage of the outdoor skills theatre – available to visitors without paying extra. Subjects included cooking in the mountains; map reading; choosing a rucksack that fits you; the benefits to mental health of adventure; and how to conquer the fear of falling when you’re on the mountain.

Without doubt, some of the biggest draws were the celebrity speakers, some of whom drew large crowds of avid listeners from the visiting throng, again without extra charge.

Mary-Ann Ochota, the British Mountaineering Council’s hillwalking ambassador, and fellow host Danny Bent introduced a pretty impressive cast of speakers. A fireside chat (there was no campfire, incidentally) with Ben Fogle, followed by a similar delivery by his chum James Cracknell probably had the biggest audience on Saturday, but blind rock-climber Jesse Dufton also had his audience spellbound.

Julia Bradbury cut the ribbon to open Sunday’s session before heading for her fireside chat in front of another big crowd, despite the relatively early scheduling. It has been a difficult couple of years for the television presenter, having to cope, along with all the other peculiarities of life under lockdown, with a breast-cancer diagnosis, a subsequent mastectomy and treatment. Yet her upbeat demeanour and delivery couldn’t help but impress.

As did other speakers. Dwayne Fields, the first black Briton to walk to the magnetic North Pole after escaping the dangers of experiences among gang and crime life. Sabrina Pace-Huphreys, whose film Black Sheep will detail her experience of racial abuse and her founding of Black Trail Runners, inspired by the Black Lives Matter movement. 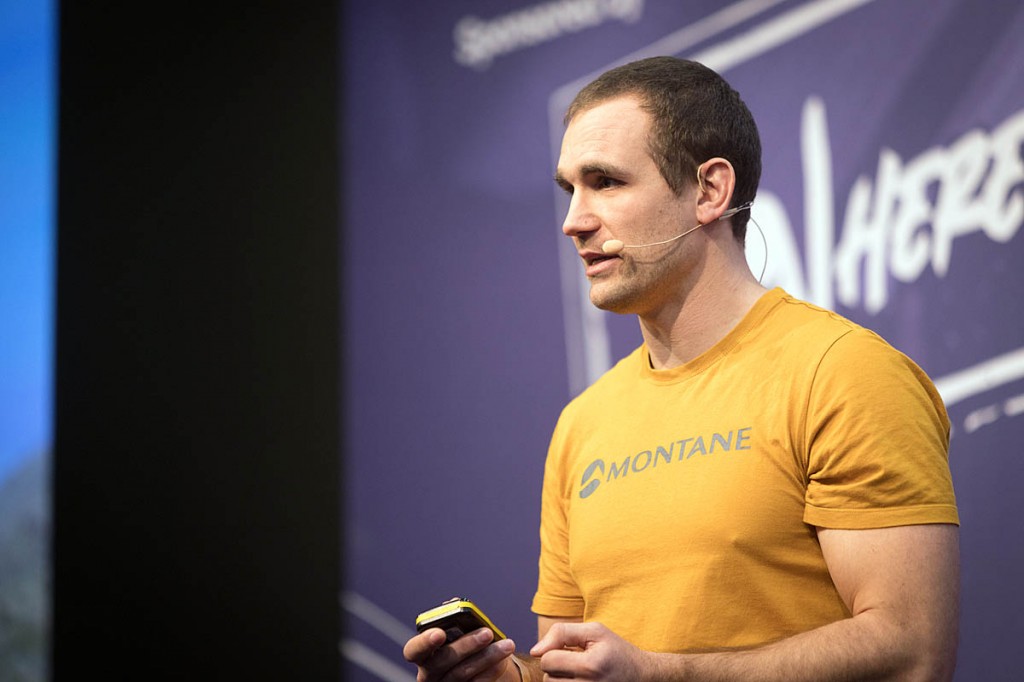 The Inspiration Stage sessions were rounded off by Sir Ranulph Twisleton-Wykeham-Fiennes, Third Baronet, better known to his friends simply as Ranulph, who has had countless scrapes in his numerous expeditions and for whom the term adventurer could probably have been coined.

Walking round the National Outdoors Expo over the two days, I heard no grumbling or complaining; I did see a lot of happy faces, so maybe the organisers got it right. Certainly Raccoon Events’ chief executive Mike Seamen thought so. He was hoping for 10,000 visitors. In the end, almost 15,000 people went through the doors to enjoy the show. The expo will definitely be repeated next year, he said.

I stopped attending the old Outdoors Show because I thought it had become tired and had run out of steam. Visitors seemed sparser and the Docklands venue the wrong location. Birmingham may not be a logical outdoors destination but it’s easier for many people to reach, and the balance of attractions at the event seemed about right.

So, the National Outdoors Expo has found a place in my diary. Just, next time, can we arrange for it to be blowing a storm and pouring down so I don’t feel quite so torn between the indoors and the outdoors?

Next year’s show will again be staged at the NEC on 18 and 19 March.

Report: Half of US Waters too Polluted for Fish

Report: Half of US Waters too Polluted for Fish