Australia’s coronavirus-related death toll rose by three to a total of 68 on Saturday, health data showed, with the government stepping up its calls for people to sign up for a controversial movement-tracking mobile phone app.

Australia and neighbouring New Zealand have shown early success in potentially stopping Covid-19 after closing their early and imposing strict curbs on public movement. Australia recorded 36 new cases on Saturday, bringing the total to 6,533 cases, according to the health ministry data.

Prime Minister Scott Morrison said on Saturday that downloading a movement-tracking up, which would enable the government to detect potential new outbreaks and which has been criticised as invasion of privacy, would not be mandatory. 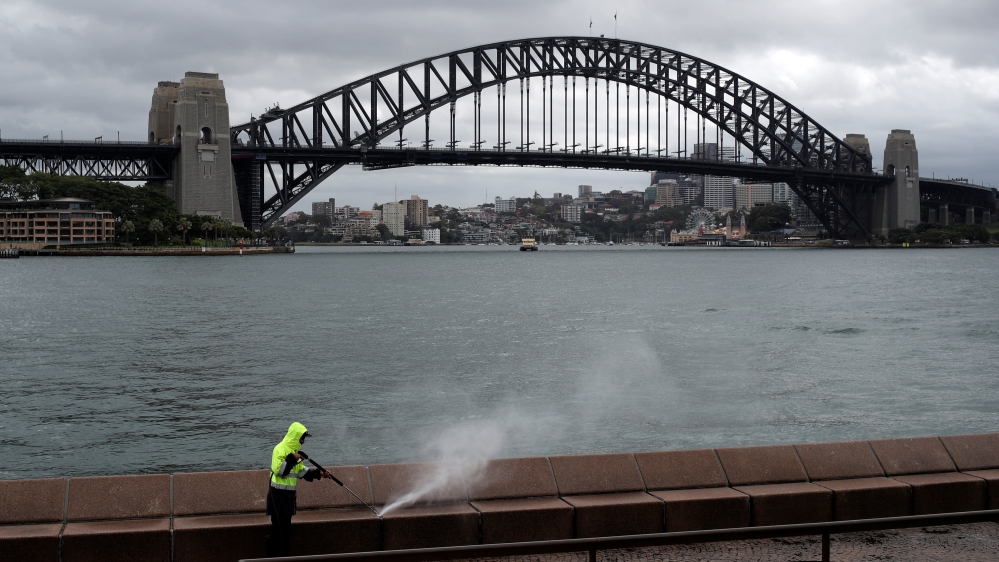 “The president’s statements this morning encourage illegal and dangerous acts. He is putting millions of people in danger of contracting COVID-19,” Inslee said in a series of tweets on Friday afternoon.

Inslee’s tweets came after Trump apparently encouraged the growing protests against the stay-at-home restrictions aimed at stopping the coronavirus.

LIBERATE VIRGINIA, and save your great 2nd Amendment. It is under siege!

Eleven of the new cases were in Bangkok and had a history of going to public areas, said Taweesin Wisanuyothin, a spokesman for the government’s Center for COVID-19 Situation Administration.

No new deaths were reported and 1,787 people have recovered, he said.

Thailand has reported 47 fatalities since the outbreak escalated in January.

Hello, this is Joseph Stepansky in Doha taking over from my colleague Ted Regencia.

Germany’s confirmed coronavirus cases have risen by 3,609 to 137,439, data from the Robert Koch Institute (RKI) for infectious diseases showed on Saturday, marking a fourth straight day of a spike in new infections.

South Korea has reported 18 new cases of the coronavirus, its lowest daily jump since February 20, continuing a downward trend as officials discuss more sustainable forms of social distancing that allows for some communal and economic activity.

At least 993 of overall infections have been linked to arrivals from overseas.

Japan, alarmed by rising coronavirus deaths and the spectre of the collapse of the medical system, is scrambling to expand testing with drive-through facilities and general practitioners helping to collect samples, according to Reuters.

The decision to expand testing came as Prime Minister Shinzo Abe this week expanded a state of emergency, originally issued for Tokyo and six other areas, to the entire country, and warned of the growing burden on health facilities

Japan conducted about 52,000 polymerase chain reaction (PCR) tests in March, or just 16 percent of the number carried out in South Korea, according to data from Oxford University.

China has reported 27 new confirmed cases of coronavirus, also known as COVID-19, as it tries to stem an upsurge in infections in a northeastern province bordering Russia.

Twenty of the new cases were in Heilongjiang province, including 13 Chinese nationals who had returned recently from Russia. The land border with Russia has been closed.

The confirmed cases brought the total to 82719, of which 77,029 have recovered. Meanwhile, China’s official death toll rose sharply to 4,632, reflecting a major upwards revision the previous day by authorities in Wuhan, the nation’s hardest-hit city.

From zero reported infections and fatalities in January and February, Indonesia now has the highest number of cases and deaths in Southeast Asia.

Indonesia has reported nearly 6,000 cases surpassing the Philippines. The death toll in Indonesia as of Friday was 520. 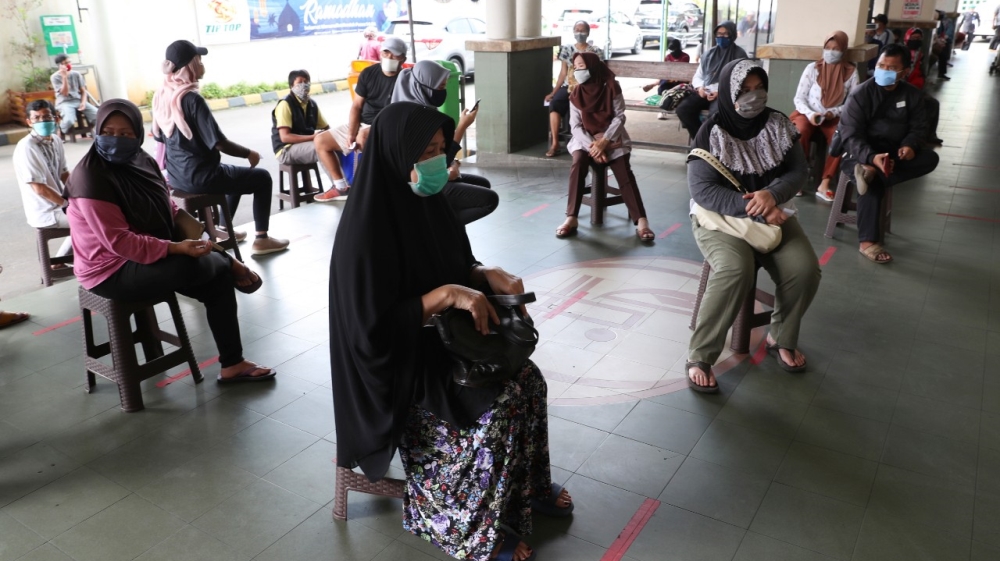 People wears face masks as they practice social distancing to prevent the spread of the new coronavirus at a supermarket in the Indonesian capital, Jakarta, on Friday [Achmad Ibrahim/AP]

Canada’s transport agency has announced that all airline passengers would be required to wear a non-medical mask or face covering during travel to curb the spread of coronavirus.

The regulator said travellers must cover their mouth and nose during the boarding process and flights. The rule goes into effect on Monday.

Air Canada, the country’s largest carrier, had previously recommended that customers wear a face-covering over their mouth and noses while onboard its flights.

02:00 GMT – Many migrants on US deportation flight had coronavirus – Guatemalan president

Guatemalan President Alejandro Giammattei has announced that a large number of the migrants on a deportation flight from the United States to Guatemala earlier this week were infected with the novel coronavirus.

Earlier, it was reported that at least 44 of the 77 Guatemalans deported on Monday were infected with the coronavirus.

US President Donald Trump says he remains hopeful that he will be able to resume campaign rallies ahead of the November election.

Trump said that he does not want social distancing at his rallies, which typically draw big crowds, because doesn’t want attendees to miss the “flavour” of the experience. Trump stopped holding his big stadium rallies in early March because of the coronavirus pandemic.

The president predicted that when the rallies resume they’ll be “bigger than ever.” He plans to travel to the US Military Academy in New York next month to deliver the commencement ceremony. 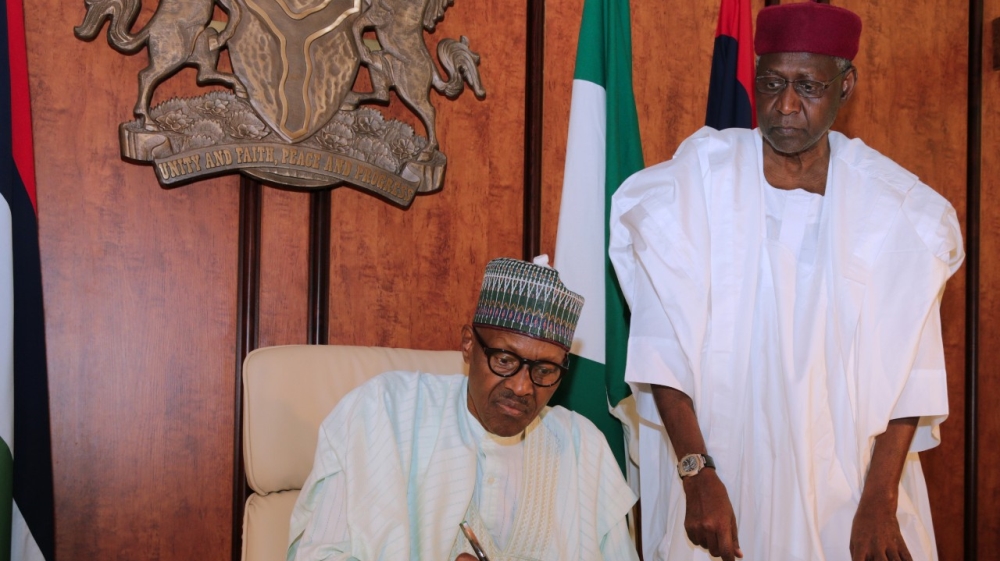 Abba Kyari (standing) served as the chief of staff of Nigerian President Mohammadu Buhari (seated) since 2015 until his death on Friday [File: Aghaeze/Nigeria State House via AFP]

Kyari, who was in his 70s and had underlying health problems including diabetes, was the top official aide to 77-year-old President Muhammadu Buhari and one of the most powerful men in the country, Reuters news agency reported.

“The Presidency regrets to announce the passage of the Chief of Staff to the President, Mallam Abba Kyari,” said presidency spokesman Garba Shehu in a tweet, using an honorific title for Kyari.

Kyari’s was the highest-profile death due to the disease in the West African country, which has 493 confirmed cases and 17 deaths, according to the Nigeria Centre for Disease Control. 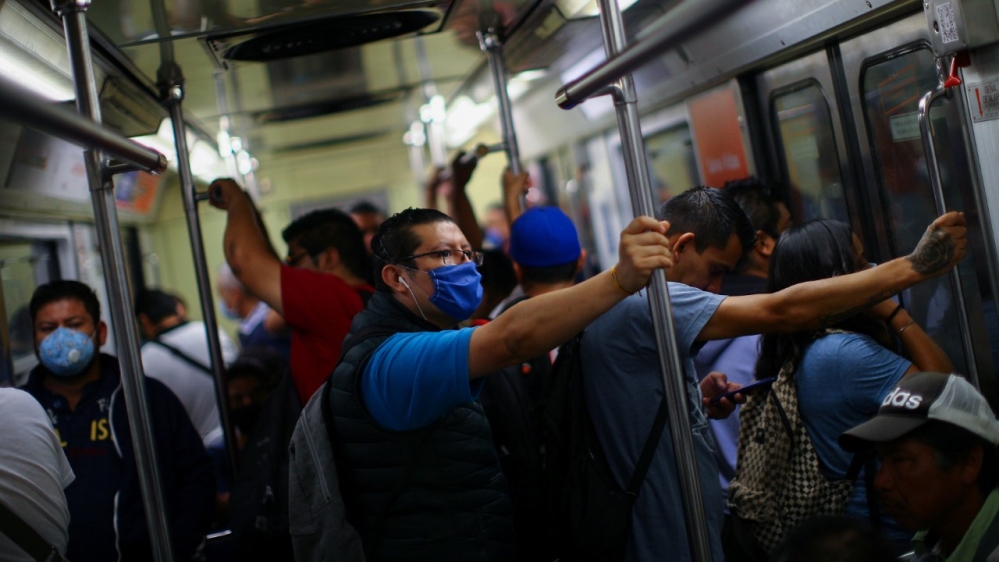 Mexico has declared a mandatory use of face masks= inside trains and subway stations, as a measure to contain the spread of the coronavirus disease [Edgard Garrido/Reuters]

Mexican health officials have reported 578 new cases of the novel coronavirus and 60 new deaths, bringing the country’s total to 6,875 cases and 546 deaths.

Deputy Health Minister Hugo Lopez-Gatell said on Thursday the country might have nearly 56,000 people infected with the fast-spreading coronavirus.

Citing government models, Lopez-Gatell has said many who are infected likely did not have symptoms or were not diagnosed.

Mexico’s president says that United States President Donald Trump has promised Mexico will be able to buy 1,000 ventilators and other intensive-therapy equipment used in treating severe cases of COVID-19.

President Andres Manuel Lopez Obrador says he spoke with Trump about Mexico’s request to purchase the machines, relatively few of which are available in Mexico.

Lopez Obrador said on Twitter that Trump “guaranteed me that by the end of this month” Mexico could buy 1,000 ventilators and possibly more.

Lopez Obrador calls it a “new gesture of solidarity with Mexico”. He says he suggested a meeting with Trump in June or July to personally express the country’s appreciation.

Hello, I’m Ted Regencia in Kuala Lumpur, Malaysia, with Al Jazeera’s continuing coverage of the coronavirus pandemic. You can find all the updates from yesterday, April 17, here.

STYLE NOTES: Tracing the fashion roots of the #pillowchallenge from Margiela to Moncler

STYLE NOTES: Tracing the fashion roots of the #pillowchallenge from Margiela to Moncler

How to handle the anxiety around covid testing for travel