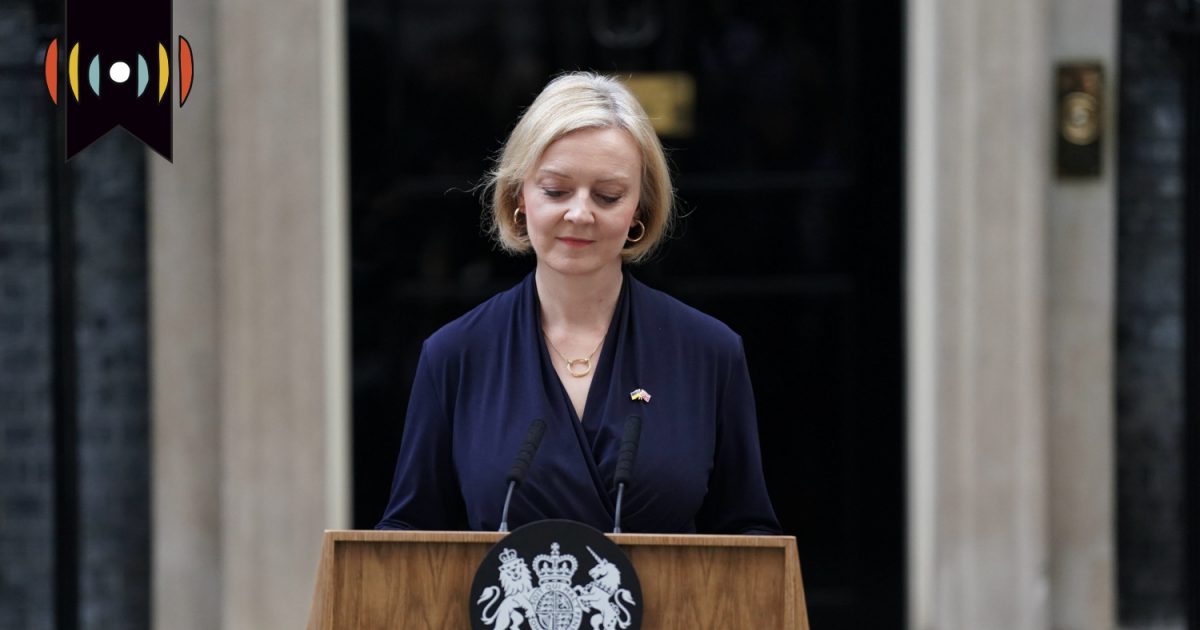 TRUSS: We’ve agreed that there will be a leadership election to be completed within the next week. This will ensure that we remain on a path to deliver our fiscal plans and maintain our country’s economic stability and national security.

She was labeled a lame duck leader after her economic plan rattled the markets and Treasury chief Jeremy Hunt tossed it out.

She announced her resignation after just six weeks on the job, but she’ll remain in office until a new leader is in place.

As her party considers her replacement, the leader of the opposition Labour party, Keir Starmer, is calling for a new general election.

STARMER: We can’t have a revolving door of chaos. We can’t have another experiment at the top of the Tory party. There is an alternative, and that’s a stable Labour government.

Among the rumored possible replacements for Truss is Boris Johnson, who resigned as prime minister in July amid multiple controversies.

Iran » U.S. officials say Iranian troops have been on the ground in Crimea supporting Russia’s drone attacks in Ukraine.

KIRBY: Tehran is now directly engaged on the ground and through the provision of weapons that are killing civilians and destroying civilian infrastructure in Ukraine.

Kirby said “a relatively small number” of Iranian troops have been on the ground in Crimea, which Russia illegally annexed from Ukraine in 2014.

Thursday’s announcement comes as the Biden administration continues efforts to revive the 2015 nuclear deal with Iran.

But Kirby said hopes for restoring that deal anytime soon are fading.

Pentagon to reimburse for abortion travel » The Biden administration has announced that the Pentagon will pay the travel costs of service members and their dependents who seek an abortion in another state. WORLD’s Anna Johansen Brown reports.

It also sets privacy guidelines, prohibiting commanders from discouraging a subordinate from ending a pregnancy.

It builds on initial reaction by the Pentagon in June after the Supreme Court reversed Roe v. Wade. The Defense Department said at the time that it would continue to allow medical leave for service members who choose to travel for abortions.

Austin directed the services to implement the new policy by the end of this calendar year.

Biden stumping in Pennsylvania » President Biden has been leaning heavily on abortion as a campaign issue with Election Day less than three weeks away.

But on Thursday he stumped in Pennsylvania, touting bipartisan infrastructure spending.

He spoke in front of a Pittsburgh bridge that partially collapsed just hours before Biden visited the city last January.

BIDEN: This is just one of 2,400 bridges across the country that are being repaired just this year because of this law.

Out of roughly $1 trillion in spending, about $40 billion is dedicated to bridges.

Record deaths at border » A record number of migrants have died at the U.S. southern border over the past year. WORLD’s Kristen Flavin has more.

KRISTEN FLAVIN, REPORTER: Officially, about 750 migrants have perished trying to cross the border since last September. But the actual number may be higher as not all deaths at or near the border are accounted for.

CNN reports that the bodies of migrants who died trying to cross the border are being stored in refrigerated containers in Maverick County, Texas. That’s because a local funeral home has run out of space.

Border officials have reported a record surge of border traffic with more than 2 million migrant encounters over the past year.

CDC Director Rochelle Walensky is expected to adopt the recommendation. That would add the shots to formal lists of recommended vaccines—alongside shots for polio, measles and hepatitis.

But state and local officials don’t have to accept those recommendations. Florida Gov. Ron DeSantis immediately assured residents of his state …

DESANTIS: School districts are not mandating this choice. So we will make sure that your freedom to make those decisions on behalf of your kids remains intact.

The CDC does not have the authority to mandate shots nationally.