The Department of Health and Human Services told The Associated Press Wednesday that the federal stockpile was in the process of deploying all remaining personal protective equipment in its inventory.

The HHS statement confirms federal documents released Wednesday by the House Oversight and Reform Committee showing that about 90% of the personal protective equipment in the stockpile has been distributed to state and local governments. 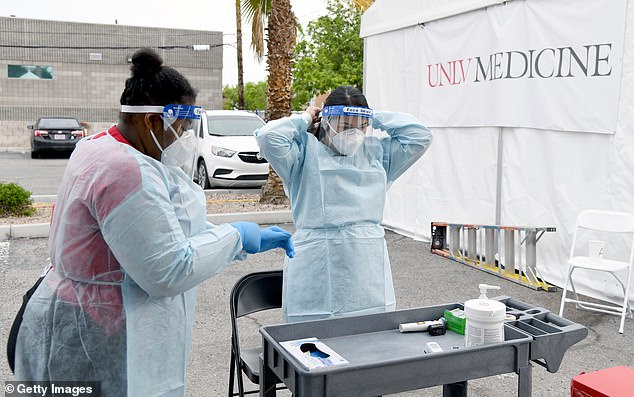 We’re out: The federal stockpile of equipment like the masks and gowns worn by frontline workers dealing with coronavirus is effectively empty, HHS admits 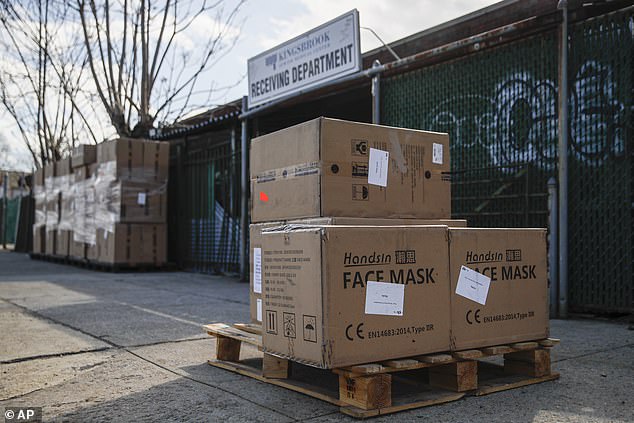 House Oversight Chairwoman Carolyn B. Maloney, D-N.Y., said in a statement that the Trump administration is leaving states to scour the open market for scarce supplies, often competing with each other and federal agencies in a chaotic bidding war that drives up prices.

‘The President failed to bring in FEMA (the Federal Emergency Management Agency) early on, failed to name a national commander for this crisis, and failed to fully utilize the authorities Congress gave him under the Defense Production Act to procure and manage the distribution of critical supplies,’ Maloney said.

‘He must take action now to address these deficiencies.’

For the last month, health care workers across the nation have taken to social media to illustrate the shortages by taking selfies wearing home-sewn masks on their faces and trash bags over their scrubs.

President Donald Trump has faulted the states for not better preparing for the pandemic and has said they should only being relying on the federal stockpile as a last resort.

The AP reported Sunday that the Trump administration squandered nearly two months after the early January warnings that COVID-19 might ignite a global pandemic, waiting until mid-March to place bulk orders of N95 masks and other medical supplies needed to build up the stockpile.

By then, hospitals in several states were treating thousands of infected patients without adequate equipment and were pleading for help.

Trump spent the first two months of the outbreak playing down the threat from the new virus.

He derided warnings of a pandemic as a hoax perpetrated by Democrats and the media, predicting as late as Feb. 26 that the number of U.S. cases would soon drop to zero.

The stockpile was created in 1999 to prevent supply-chain disruptions for the predicted Y2K computer problems.

It expanded after 9/11 to prepare for chemical, biological, radiological and nuclear attacks.

Congress provided money in 2006 to prepare for a potential influenza pandemic, though much of that stock was used during the H1N1 flu outbreak three years later. 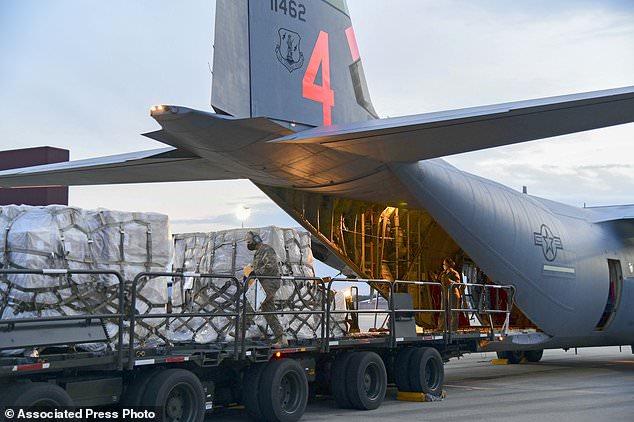 Supplies:200 ventilators from the federal stockpile are delivered by the California Air national Guard to New York

At the start of the COVID-19 crisis, the federal stockpile had about 13 million N95 respirators, masks which filter out about 95% of all liquid or airborne particles and are critical to prevent health care workers from becoming infected.

That’s just a small fraction of what hospitals need to protect their workers, who normally would wear a new mask for each patient, but who now are often issued only one to last for days.

But those contracts won’t yield big deliveries to the national stockpile until the end of April, after the White House has projected the pandemic will reach its peak.

For nearly a month, Trump rebuffed calls to use his authority under the Defense Production Act to order companies to increase production of respirators and ventilators, before he relented last week.

Asked about the AP report, the president suggested Sunday the states should be thankful for the shipments of supplies they have gotten.

Vanessa Bryant Fires Back at Her Mom’s Shocking Claims

‘Thousands of People Will Pass Away,’ Cuomo Warns: Live Updates

Why So Many Stars Are Totally Crushing on Ilea Beauty

So you’re working remotely and want to move? Here are the questions you should ask

The Easiest Way to Hunt Elk on Public Land