Fashion Police Squad: FPS with an Eye on Arresting Ensembles

Fashion Police Squad sets itself apart from the games I’ve been reviewing by having a plot. Your squad consists of Des and Haley, and their job is to investigate and solve fashion crimes.

Initially, these crimes take the form of enemies clad in desperately dull colors, and your weapon of choice is a paintball gun designed to rectify this issue. However, as you play through the 13 or so primary missions, you discover that there’s a fashion conspiracy, which you have to unravel. 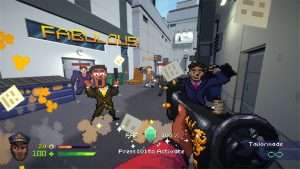 There are a surprising amount of twists to what should have been a largely joke plot. From that perspective, Fashion Police Squad sets itself apart from my standard fare. The plot actually seems to matter.

With the cuteness of the set up established, let’s talk gameplay. First, your weapons are almost exclusively possessed of infinite ammo because that’s part of the setup. There is one gun, a BFG-style, that has limited ammo, but I didn’t use it all that often. The enemies also have infinite ammunition, which is unsurprising. However, the type of ammunition they use is. Some of your enemies—drab businessmen in suits—throw briefcases. There are gnomes that you pick up that work like grenades. The game leans hard into its delightfully silly ambience, and it does quite well. Scrounging for ammo wouldn’t really fit the game’s vibe, and the developers made the solid decision to eschew that mechanic. 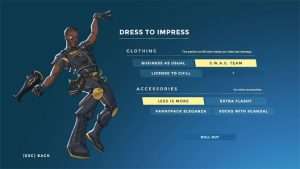 The levels themselves are pretty straightforward and linear. If you’re not a fan of that style, Fashion Police Squad might not be for you because the levels don’t vary a whole lot in terms of design. If, however, you’re more interested in the fun romp, the linear levels are a recommendation rather than a problem. I liked that you use scissors to cut through fabric gates as that, once again, feels very fitting. Each level does feature waypoints, but I didn’t find that the levels required that much saving. I played through and was able to finish a level before having to go perform another activity. All told, the game is probably around six or seven hours, depending on how you play.

There are some issues with gameplay that were more frustrating than they should have been. Damaging enemies is weapon-specific. By that I mean each type of enemy requires a certain type of weapon to combat. That means you end up cycling through weapons, so getting through the levels can be pretty clunky. On the one hand, it sort of makes sense. You want to add color to the drab enemies and do other things to different enemies. It wouldn’t make work in terms of the setup to use the same weapon on every enemy. However, it doesn’t make for a clean run, and I found myself forgetting to switch and taking damage as a result. I’m glad ammo wasn’t an issue because I would have run out of key ammo by virtue of forgetting to shift. 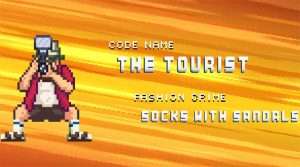 This mechanic also means that when confronted by a pack of multiple types of enemies, which happens a lot, the most logical strategy is to pick them off by type while trying to avoid taking damage from the other types. Using that strategy would be just fine were the levels less claustrophobic. However, Fashion Police Squad features some pretty tight combat spaces, so taking damage is nearly impossible to avoid. There’s an enemy that shoots fire and sets fire to the ground, and that shrinks the available space even more. It’s just not great level design, and it rendered one pretty early level so irritating to play that I almost gave up, the hilarious dialogue and world-building notwithstanding. However, this may be an issue specific to your gentle author rather than a problem with the game. 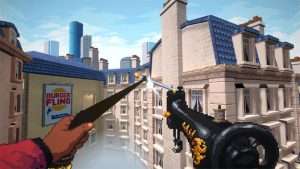 The game does offer a special ability that grants you invincibility for a certain space of time, but the charge time is far, far too long given the length of each level. You can use it maybe twice a level, and if you get caught in multiple choke points, you’re in trouble. The BFG also poses a similar problem because you really have to hold on to that weapon until the final boss. It has so little ammo that using it beforehand would just waste the weapon. 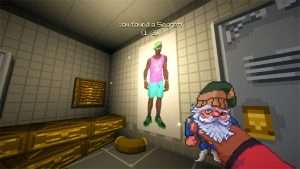 Fashion Police Squad also requires a fair amount of platforming. Longtime readers will note that I am absolutely terrible with platformers where I can see where I’m jumping. Fashion Police Squad is an FPS, so no, you can’t quite see where you’re going. Moreover, the platforms are bizarrely unforgiving, given the setup. As a result, the game really broke down for me at the platforming. I freely admit that I threw in the proverbial towel well before the final boss no matter how charmed I was by the game’s premise. 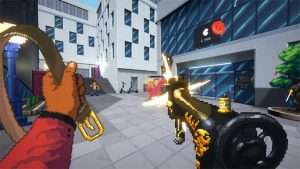 Visually, the game embraces that retro, 90’s look, and the aesthetics definitely give Fashion Police Squad an almost arcade feel. The game’s soundtrack is fantastically retro, and I loved the announcer who shouts out fashion terms as you defeat enemies by fixing their hair. The game flows smoothly, so the retro-feel fortunately remains a style choice and not a play experience.

The game is heavy on dialogue, somewhat surprisingly for an FPS. However, the dialogue is pretty hilarious. I enjoyed the dialogue, but if you’re looking to keep up a frenetic, adrenaline-filled pace, this will not be the game for you as these segments do break up gameplay. 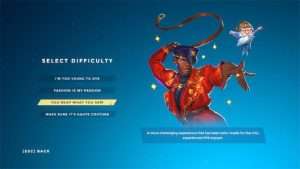 Fashion Police Squad is a game that starts from a pretty fantastic premise and then gets bogged down in tedium about halfway through gameplay. The game, apparently, remains funny and silly in terms of dialogue and setting until the bitter end, but getting there is often an exercise in frustration. Still, if you happen to like that kind of challenge, Fashion Police Squad has a lot to recommend it, mostly in the form of its inveterate devotion to the silliness of its premise. If nothing else, Fashion Police Squad represents a refreshingly unique twist on the FPS concept that’s definitely worth experiencing.

Stray Thoughts From Behind the Keyboard