Fashion designer explains why his grandfather is his runway model 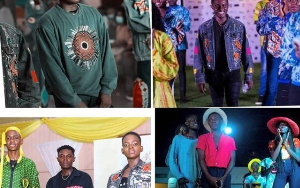 Elisha Boie says he is inspired by his grandfathers fashion sense

Elisha Boie, a young Ghanaian fashion designer has shared insights into why he uses his grandfather as a fashion model for his brand.

He revealed that growing up, he always saw his grandfather as very fashionable and creative especially, when it came to clothes.

According to Elisha his fashionista grandfather always makes statements with his cloth selection. “One time, he wore a pajamas to church because he felt it looked too good for him to only sleep in it”.

Throwing more light on why he chose to use his grandfather as a model when there were many other young men and woman he could have opted for, he said, “we wanted to make a statement and change what everyone thought about old people being boring and not having a life”.

“We also wanted something different and unique that is why we went for him and his love for fashion even made it easier” he added.

Speaking in an interview with Foster Romanus on the Late Nite Celebrity Show on e.TV Ghana, he said, “The idea of using my grandfather as a model came to me about two years ago. I decided to find out the age of the oldest model in the world and realized he was in his 80’s. I realized my grandfather is way older than that this is because he is in his 90’s and is still strong and fit. We decided to challenge ourselves and dare to be different with this information”.

Elisha went on to say that so far, the reception towards the old model has been good and currently, “we have filed for him to be in the Guinness book of world records as the oldest model and the process is ongoing”.