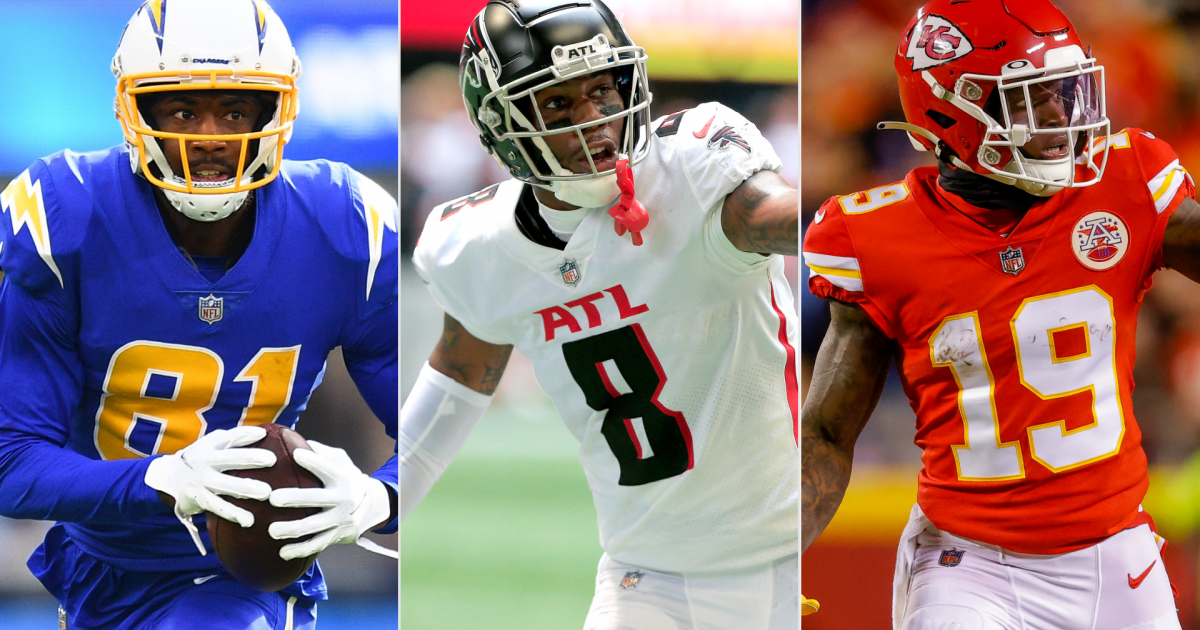 Another week, another set of big injuries to key pass-catchers. This weekend, we saw Mike Williams, Kyle Pitts, Kadarius Toney, and Wan’Dale Robinson exit their respective games early, and you can bet Week 12 fantasy waiver wire pickups and rankings will be affected if any miss time.

Below, we’ll give you the latest news on these pass-catchers and break down how their injuries could potentially affect the Week 12 fantasy landscape. For updates on injured RBs Joe Mixon and Clyde Edwards-Helaire, go here; for news on banged-up QBs Matthew Stafford and Justin Fields, go here.

Follow your fantasy team and watch every week during the 2022 NFL season on Sling TV. Stream Sling Orange or Blue for $35/month, or both for $50/month. Right now, get half off your first month, plus SHOWTIME, STARZ, AND EPIX — first month on us! SIGN UP FOR SLING!

Chargers head coach Brandon Staley told reporters on Sunday night that Williams (ankle) aggravated his high ankle sprain against the Chiefs, according to beat writer Daniel Popper. Williams reinjured himself in the first quarter and was ultimately ruled out for the rest of the game.

This is not great news for Chargers fans and fantasy owners, who were excited to see Williams and Keenan Allen back on the field. Williams only missed the past two games because of the ankle issue, but it’s clear he’s not fully healthy yet and will likely miss the next two-to-three games, at a minimum. Josh Palmer will continue to have a big role and be worth a WR2/3 spot most weeks, while DeAndre Carter will also be in the mix as a potential flex in favorable matchups. Both are on the radar in Week 12 against the Cardinals, so deep leaguers should stash Carter and shallow leaguers should definitely grab Palmer.

UPDATE: NFL Network’s Ian Rapoport reported Monday afternoon that Pitts suffered a torn MCL. He will seek a second opinion before deciding what to do, but there’s a good chance he’ll miss the rest of the season.

UPDATE 2: Pitts has officially been placed on the IR, meaning he’ll be out until at least Week 17. At this point, his fantasy owners can safely drop him.

Pitts exited Sunday’s game against the Bears with a knee injury. Jordan Schultz of The Score reported that “early indications” are Pitts did not tear any ligaments in his knee. He still has to go through an MRI to see the extent of the injury, but the Falcons remain optimistic.

The Falcons cannot afford to lose Pitts for an extended period, as they do not have a ton of talent at the wide receiver or tight end spots. This season has been rough for the second-year tight end, who has not been able to produce at the high level that we saw him do last season as a rookie. If Pitts were to miss any time, Parker Hesse and MyCole Pruitt would be next up at tight end for the Falcons. However, neither would be worth adding in even deep fantasy leagues, as it’s likely WRs Drake London, Damiere Byrd, and Olamide Zaccheaus would simply soak up more targets.

Toney left Sunday night’s game with a hamstring injury he suffered in the second quarter. The second-year wide receiver was listed as “questionable” to return but never came back into the game.

The young wide receiver will likely miss some time, as soft-tissue injuries can linger for weeks if not treated correctly. If Toney is sidelined for a couple of weeks, it would be a tough loss for a Chiefs’ offense that does not have Mecole Hardman (abdomen) and JuJu Smith-Schuster (concussion). Smith-Schuster should be back for Week 12 if he clears the league’s concussion protocols, but fantasy owners will be looking for a Toney replacement. Marquez Valdes-Scantling could be an option off the waiver wire, but he’s been hit or miss this season, and rookie Skyy Moore is also an intriguing option after he had his best game of the season (five catches, 63 yards).

This is devastating news for the Giants, as Robinson was playing exceptionally well in Sunday’s game against the Lions, posting a career-high nine receptions (13 targets) for 100 yards. With Robinson done for the rest of the season, Darius Slayton becomes a viable waiver wire add. The veteran receiver had another solid performance in Week 11, recording five receptions (10 targets) for 86 yards. He will try to carry that momentum into Thursday’s game against the Cowboys.

Best Wool Blankets for Camping of 2023