When Seinfeld first premiered it originally left out Elaine Benes.

To think of the show existing without the tough-talking, rough-and-tumble Elaine pushing around all the men would’ve be a snooze. Thankfully for us, NBC executives thought the show needed at least one female character. How right they were.

Julia-Louis Dreyfus played Elaine over the show’s nine-year reign on ’90s televisions, Elaine is remembered for many things: her hair, her search for a sponge-worthy man and her erratic dance moves. But I’m here to make a case for something even more memorable. Her wardrobe.

While often forgotten as a style icon among other ’90s television leading ladies such as Friends Rachel Green and 902010’s Kelly Taylor, and in stark contrast to the slinky Calvin-Klein-clad supermodels Jerry generally brings home (who embody a more @90sanxiety version of the decade’s aesthetics), Elaine’s style encapsulates the pre-Y2K working woman.

Early on, Elaine was all florals and lace, a style choice that falls away as she hones a more sophisticated power suit vibe.

Her boxy and conservative outfits were androgynous, and her personality was one were typically assigned to male characters. She’s angry and loud, demanding and ambitious. She takes what she wants and pays the karmic price.

She’s also the most sexually assertive, most career-driven, sometimes the most disgusting and probably the funniest of all the characters on Seinfeld. She isn’t just ‘one of the boys’, she’s human; a version of womanhood similar to ours and achievable to others.

She was written by a table of mostly men who Larry David told to forget her gender, but styled by Charmaine Simmons, a woman.

Here are some of her most iconic looks: This is Elaine in high school watching Sue Ellen Mischke steal her boyfriend. More importantly, she wore her hair straight, something she doesn’t experiment with again until later seasons. The suburban ’70s vibe is big-time Marcia Brady. Years later, when Elaine and Sue Ellen reunite, Elaine mocks Sue Ellen (or ‘Braless Wonder’ as she calls her) by gifting her a bra. When Sue Ellen shows up at Elaine’s office to showcase the gift, she inadvertently turns the look into a trend that all the women (except Elaine) jump on board with. Even today, the bra and blazer look is street style 101. In later seasons, Elaine’s wardrobe palette became more-cool toned and dark which lead to more creative accessories. Here she is in an outfit fit for every occasion, fur collar cropped cardigan and all. Pulling. It. Off.

The Pop of Colour The classic work-but-make-it-cute conundrum collides with smart casual. A deft art, but a useful one. One must not ignore this masterpiece. Elaine wore this prairie style, shoulder-padded blazer in season four and I will now scour every vintage shop for shoulder pads this lofty. Trading in a blazer for a vest means it must have been summer. I bet she paired her blue-toned top half with some cute sailor shorts in the same colour scheme. 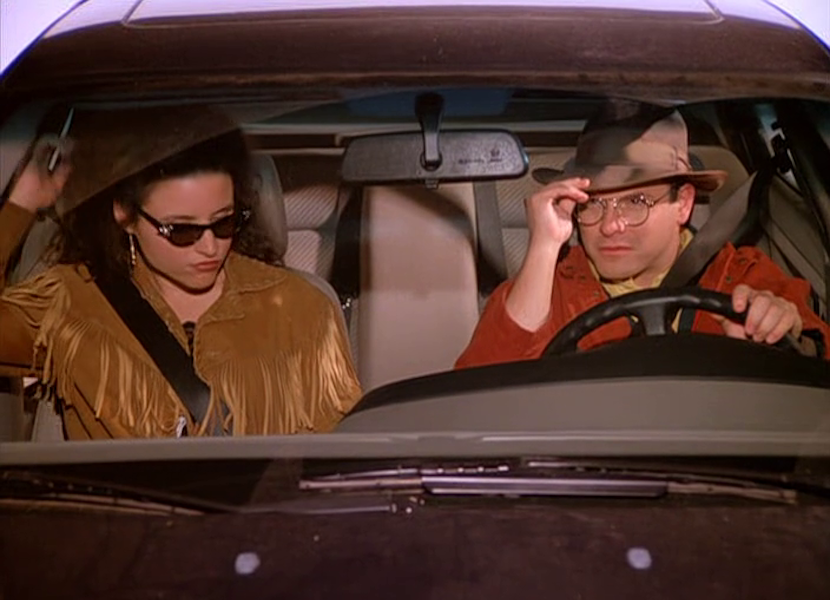 Long hemlines, oversized denim, and loafers in dark tones. The perfect combo for a woke-up-like-this look. It wouldn’t be a post about Elaine’s style without mentioning her adoption of Georges style in ‘The Opposite’. George finds good luck by doing the opposite of everything, as Elaine’s life gradually disintegrates. She is left George-ified by the end of the episode. Classic. Even Elaine’s identical mannequin is stylish. This is important. And here is the queen looking every bit the boss lady she deserves. She puts the company in jeopardy but at least she looks great doing it.

And here she is in the final episode, dancing her way off to jail. She would have looked equally as fierce in an orange jumpsuit, but we will never get to see it.

40 Funniest Birthday Memes For Anyone Turning 40

Found this in my recommended feed