Deezer Brings Back the 90s with New ‘InVersions’ Compilation

Deezer is once again shining a light on a decade in music, with the help of some of the most creative and exciting artists of today. Soccer Mommy, Ayra Starr, Rachel Chinouriri,  and 13 other emerging talents from around the world have put their own unique spin on their favorite old school hits. InVersions 90s is now available exclusively worldwide on Deezer. 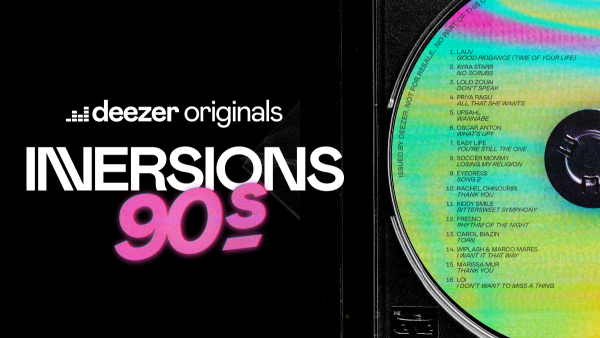 “With the 90s making a big comeback in both fashion and music lately, it is the perfect theme for the next iteration of our InVersions series,” said Nigel Harding, VP of Global Artist Relations at Deezer. “It was a decade filled with massive radio hits and a lot of creative songwriting across all genres, which gave our artists a lot to choose from. The results are fantastic and I can’t wait to see how the fans react.”

Soccer Mommy, the American multi-instrument singer and songwriter, covered R.E.M’s ‘Losing My Religion’ and said about the 90s and her approach to the song: “There are so many bands and artists from the 90s that inspire me personally. I think there was a lot of good songwriting, but also the production had so much range and so much creativity. I wanted to do a version on my own that was a little more solemn and dark. I wanted to keep the chords and arrangement pretty much the same to the original, but just add my own voice.”

“The legacy of 90s music can not be understated. From samples to covers, 90s music remains alive in this current soundscape. There were so many gems in the 90s that remain evergreen even today,” said Nigerian afro pop and RnB star Ayra Starr. She continues about her cover: “As a child, I heard [‘No Scrubs’ by TLC] and loved how catchy it was but covering the song made me really get into the message itself. Coming from that perspective as a young woman (like the TLC crew at the time), I just channeled those emotions into the song itself.”

British singer-songwriter Rachel Chinouriri said: “So many of us are inspired by music from this era and some of the best songs have come from the 90s.” She covered ‘Thank you’ by Dido and commented: “I love this song so much. There were so many I could’ve picked but it’s one which lyrically resonated with me. Dido’s ability to tell the story and make it feel like it’s you is incredible.”

See the full track list below, and click here to listen to InVersions 90s now, exclusively on Deezer.

ⓒ 2022 TECHTIMES.com All rights reserved. Do not reproduce without permission.