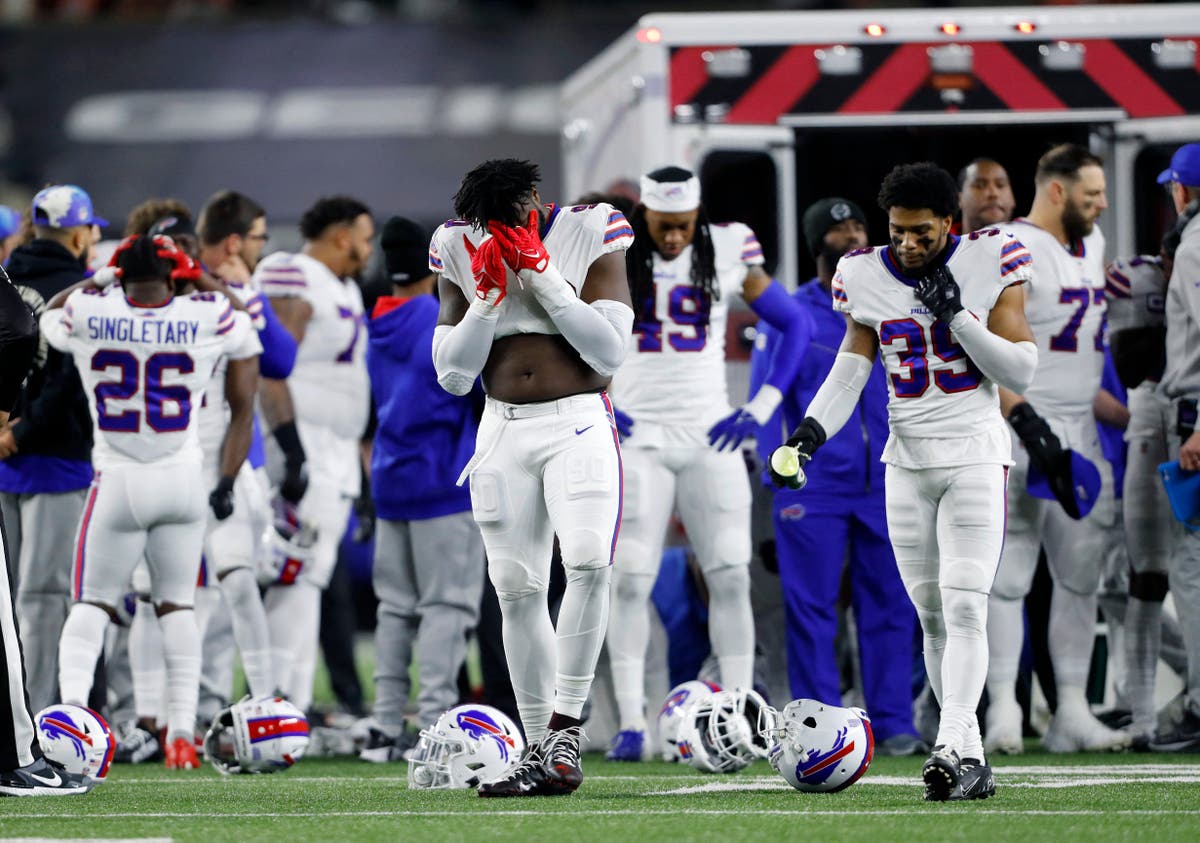 NFL player Damar Hamlin is in critical condition in hospital after suffering a cardiac arrest on the field during a game on Monday night. The Buffalo Bills safety collapsed to the ground after making a tackle on Cincinnati Bengals receiver Tee Higgins before being treated by first responders.

CPR was administered and his heartbeat restored on the field before Hamlin was taken from the field in an ambulance to a local hospital. “Damar Hamlin suffered a cardiac arrest following a hit in our game versus the Bengals,” the Bills posted on their official Twitter account.

“His heartbeat was restored on the field and he was transferred to the UC Medical Center for further testing and treatment. He is currently sedated and listed in critical condition.”

Hamlin’s family have thanked fans as well as praising the work of medical personnel and the support from the Bengals and coach Zac Taylor. “We are deeply moved by the prayers, kind words, and donations from fans around the country,” a statement on Tuesday read.

Meanwhile, Troy Vincent, the NFL’s executive vice president of football operations, refuted ESPN’s broadcast report that both teams were given a five-minute warm-up period to resume playing. “I’m not sure where that came from,” Vincent said. “It never crossed our mind to talk about warming up to resume play. That’s ridiculous. That’s insensitive. That’s not a place we should ever be in.”

Higgins was running with the ball on a 13-yard pass from Joe Burrow when he led with his right shoulder, hitting Hamlin in the chest. Hamlin then wrapped his arms around Higgins’ shoulders and helmet to drag him down. Hamlin quickly got to his feet, appeared to adjust his face mask with his right hand, and then fell backward about three seconds later and lay motionless.

Hamlin was down for 19 minutes while receiving medical attention. WXIX-TV in Cincinnati reported that Hamlin required an automated external defibrillator (AED) in addition to CPR on the field.

Team-mates surrounded Hamlin, shielding him from public view. Many were weeping and praying while Hamlin was treated on the field by team and independent medical personnel and local paramedics. He was taken by ambulance to University of Cincinnati Medical Center. Team-mate Stefon Diggs later went to visit Hamlin at the hospital while fans of both teams gathered outside, holding lit candles and praying.

A Buffalo Bills statement then said: “Damar Hamlin suffered a cardiac arrest following a hit in our game versus the Bengals. His heartbeat was restored on the field and he was transferred to the UC Medical Center for further testing and treatment. He is currently sedated and listed in critical condition.”

“First and foremost, the Bengals continue to send thoughts and prayers to Damar Hamlin and his family,” it reads. “Our hearts are with everyone in this unprecedented time – what we can do is support one another.

“Last night was supposed to be a great night for the NFL and a great showcase for our hometown. Instead, the human side of our sport became paramount … and in that moment, humanity and love rose to the forefront.

“As medical personnel undertook extraordinary measures, both teams demonstrated respect and compassion while fans in the stadium and people around the country bolstered the support for Damar and love for each other.

“The Bengals are thankful for the love and compassion shown by all. Praying for Damar.”

‘Prayers that Damar Hamlin can have the same outcome’, says former NHL star who collapsed on ice

Chris Pronger, the former National Hockey League defenceman who collapsed and suffered a cardiac arrest when a slap shot hit him in the chest at the 1998 Stanley Cup playoffs, has sent Damar Hamlin a message of support and hopes the NFL star can recover to play again.

Pronger, who collected two Olympic gold medals for Canada, was able to continue his career, playing for more than a decade after recovering from the incident.

“Prayers that Damar Hamlin can have the same outcome that I was fortunate to have with my incident,” he wrote on Twitter.

“Our thoughts and prayers go out to Damar, his family, teammates and the greater NFL community during this incredibly scary time,” he added.

After the 24-year-old collapsed on the field on Monday night, a video was shared on social media showing Mr Hamlin in previous weeks appearing on One Bills Live speaking about the neck injury suffered by his friend and teammate Dane Jackson.

One of those who shared the video was former Bills player Andre Reed.

“I can’t even describe it, but I cherish it every second that I can,” Mr Hamlin says in the footage from September. “Every second of every day. We just had our prayer, our DB prayer we do every Wednesday. He was next to me and I just grabbed his hand a little bit harder just because … you never know when your last day could be that you get to experience something like this. I’m cherishing every moment that I can.”

NEW: Statement from the family of Damar Hamlin

Jordon Rooney, Damar Hamlin’s friend and marketing representative, has published a statement on behalf of the Hamlin family. It reads:

“On behalf of our family, we want to express our sincere gratitude for the love and support shown to Damar during this challenging time. We are deeply moved by the prayers, kind words, and donations from fans around the country.

“We also want to acknowledge the dedicated first responders and healthcare professionals at the University of Cincinnati Medical Center who have provided exceptional care to Damar. We feel so blessed to be part of the Buffalo Bills organization and to have their support.

“We also want to thank Coach Taylor and the Bengals for everything they’ve done. Your generosity and compassion mean the world to us.

“Please keep Damar in your prayers. We will release updates as soon as we have them.”

Meanwhile, Skip Bayless’ broadcasting partner, Shannon Sharpe, was not on air this morning for their Undisputed show on Fox Sports.

It follows Bayless’ comments in the aftermath of Damar Hamlin’s collapse, in which Bayless questioned why the NFL would postpone the Bills-Bengals match.

Bayless appeared on the Undisputed show as normal this morning, where he did not immediately apologise for the comments amid a fierce public backlack.

But Sharpe was not in attendance, with Bayless adding that the commentator would return tomorrow.

Sports columnist Skip Bayless is facing a furious backlash over one of his tweets after Damar Hamlin of the Buffalo Bills collapsed during a game.

Hamlin was taken off the field in critical condition and taken to hospital after collapsing on the field.

“No doubt the NFL is considering postponing the rest of this game – but how?” the Fox Sports Undisputed pundit tweeted at 9.30pm on Monday, before the game was ultimately suspended. “This late in the season, a game of this magnitude is crucial to the regular-season outcome … which suddenly seems so irrelevant.”

Bayless later added that “nothing is more important than that young man’s health”.

“That was the point of my last tweet. I’m sorry if I was misunderstood but his health is all that matters. Again, everything else is irrelevant. I prayed for him and will continue to,” he added.

But there was a furious response to his initial tweet, which has been viewed over 115 million times on Twitter.

Tom Brady, the seven-time Super Bowl champion widely regarded as the greatest NFL quarterback of all time, has sent Damar Hamlin and his family a message of support as he remains in a critical condition in hospital.

“We’re praying for Damar and his family this morning in Tampa,” Brady posted on Twitter. “Moments like this put into perspective what it means to play this game we love. Thankful for our communities in Cincinnati and Buffalo for the overwhelming level of care and support I know they’ll continue to provide.”

Supporters reacted with outpouring of donations to Buffalo Bills safety Damar Hamlin‘s charity after he collapsed on the field during a game with Cincinnati Bengals on Monday night.

Following his collapse, his charity – The Chasing M’s Foundation Community Toy Drive – on GoFundMe has received over a half-million dollars in nearly 30 minutes. The drive’s initial goal was $2,500 but as of Tuesday morning it had reached over $3.2m with the number constantly rising.

“As I embark on my journey to the NFL, I will never forget where I come from and I am committed to using my platform to positively impact the community that raised me,” the note by Hamlin on the fund page said.

He continued: “I created The Chasing M’s Foundation as a vehicle that will allow me to deliver that impact, and the first program is the 2020 Community Toy Drive.

“This campaign gives you the opportunity to contribute to our first initiative and positively impact children who have been hardest hit by the pandemic. 100 per cent of the funds raised will go toward the purchase of toys for kids in need.”

Damar Hamlin on the importance of family: “My mom, my dad, my little brother, that’s pretty much my whole world. Outside of any other thing going on, my life revolves around them. I don’t really do too much without my mom and dad’s opinion, whether I take it or whether I don’t. Sometimes I just want to hear it. It’s how I was raised and it’s something I’m big on.”