Christopher Morel leads off tonight in center, followed by Willson Contreras at DH, Patrick Wisdom at third, Seiya Suzuki in left, and Nico Hoerner at short. Nelson Velázquez is in center, Frank Schwindel at first, P.J. Higgins is catching, and Nick Madrigal is at second.

Lefty Sean Newcomb has been called up to make the start in the late game, which is very interesting because he hasn’t started since 2020. Even then, it was in more of a late-season emergency fashion after he had made four starts out of 55 appearances the previous season. Acquired from the Braves in exchange for Jesse Chavez back in April, Newcomb pitched in just seven games for the Cubs before being outrighted to Triple-A in June.

Only two of those outings came after April 29 as the lefty battled injuries and poor performance, but he appears to have figured something out in Iowa. Over 12 appearances with one start, Newcomb has a 3.38 ERA and is limiting opposing batters to just a .148 average. And that includes allowing five earned runs over his first inning of work there, plus another five-run outburst in an inning on June 12.

The Cubs gradually stretched him out to four innings over a series of relief outings and he went four in his start on July 28, so he should be able to give the Cubs a little length. The key will be limiting walks, which has never been Newcomb’s specialty. Though he struck out 14 batters over his last eight innings, he walked five.

Expect him to display the same mid-90’s fastball he’s always had, but Bryan Smith of Bleacher Nation noted that Newcomb appears to be throwing a new slider. He had been going with more of a hard cutter early in the season and it was getting really poor results, so perhaps we’ll be seeing more of a sweeper that can back-foot righties. Being able to differentiate those two breaking balls from one another and from his curve could me a big difference.

Going for the Cardinals is Jose Quintana, who was recently acquired in a trade with the Pirates for the express purpose of beating the Cubs. While the Cards have proven they can do that just fine without help, the former Cub has stifled his old team in three starts this season. Though he’s gone 0-1 in those games, Q has allowed just five earned runs and struck out 11 batters over 16 innings.

He’s surrendered just seven home runs on the season, one of which was to Seiya Suzuki back on April 12. What’s really wild is that Quintana gave up three dingers to the Braves and two to the Giants in back-to-back starts in mid-June, but he didn’t allow one in his seven previous starts or in his seven starts since. Like Mikolas in the early game, he just doesn’t make many mistakes that allow opponents to blow games open.

First pitch is at 6:45pm CT on Marquee Sports Network and 670 The Score. 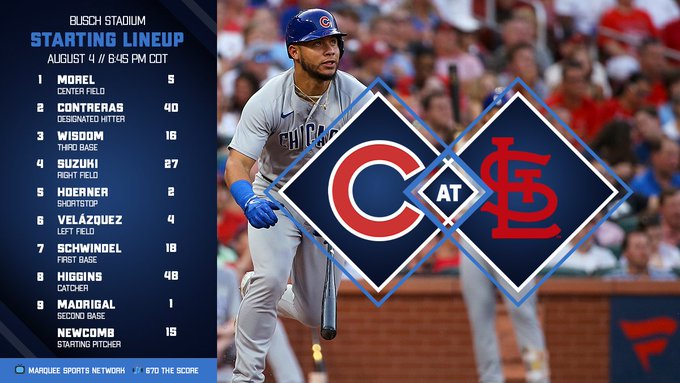 Priyanka Chopra Is “Kind Of Scared Of The Low-Rise Jean”