When Leicester lost at Tottenham in September, Brendan Rodgers knew something had to be done.

A late Heung-Min Son hat-trick had taken the game away from the visitors in north London and sent Spurs to a 6-2 win. It was a sixth defeat in a row for Leicester and another bruising scoreline for a side which had shipped 22 goals in their first seven matches, the worst defensive start by a top division club in 57 years.

But what made it even more frustrating for Rodgers was that he had seen plenty of positives in his team’s display. Positives undermined by a costly openness out of possession.

“I felt, in a funny way, after the Tottenham game that we played really well,” he tells Sky Sports, a couple of months on.

“We conceded two goals from corners, which was something which disappointed us, but our actual game was good. Through a bit of naivety in the team we lost the goals late on, just through our willingness to go and chase the game.

“After that we talked about how we had to ensure we would close the door from behind. We know we can score goals but we have to play with that wee bit more tactical discipline in our game. We worked on that after the international break and from Nottingham Forest onwards we’ve been much better.

“We had to narrow our focus on our solidarity without the ball and making sure we were together because unless you can defend well, you can’t win games. That’s something we did with our analytical team and as coaches, we all sat down and narrowed the focus in on that.”

The improvement has been stark. Leicester have let in just three goals in their last six games, kept four clean sheets and produced an excellent defensive display against Manchester City on Saturday – although ultimately came unstuck by a wonderful free-kick from Kevin De Bruyne.

The 10 points they’ve picked up during that run hasn’t been enough to lift them out of the relegation zone entirely but it’s clear there is now more optimism and positivity around the Leicester camp.

“It was always going to be a process, I reiterated the team would get better,” says Rodgers as we sit down at the club’s first-class training facility, where morning rain has made way for warm autumn sunshine.

Leicester’s collective improvement defensively has also been aided by the arrival of Wout Faes, the £15m deadline day signing from Reims. That defeat to Tottenham was a painful debut for the 24-year-old Belgian. But since then he has emerged as a key figure in the Leicester backline, setting the standard for the recovery.

One of just two signings made by Leicester in the summer – the other being back-up goalkeeper Alex Smithies on a free transfer – Faes has quickly made his mark on this team and his manager, with Rodgers full of praise for the centre-back’s understanding of the sport.

“I’ve been very impressed,” says Rodgers. “He plays as if he’s much older. He knows football – and having guys in your backline that know the game makes a huge difference.

“He’s well-educated in football, you can see that in how he plays and his game is suited to the Premier League. He’s aggressive for us. The types of defenders I like – he defends forward, he presses the game well, he’s good when it comes into the box, he gets his head on it and he can play football. He’s done very, very well and I’ve been really pleased with his start.”

For all of the Foxes’ frustrations in the summer window, Faes appears to be a fantastic addition. A rising star in his country, Faes’ quality and potential was confirmed by compatriot Youri Tielemans in a chat with Rodgers before the deal was done.

“It was a great find by our recruitment team,” said Rodgers. “He’s obviously come from being a captain with his team in France, so he has leadership qualities. I spoke to Youri about him and Youri spoke very highly of Wout.

“He’ll probably be in Belgium’s national team very soon. When I met him he came across as that type of guy. But you always get judged by what you do on the field and on the field he’s been superb.”

The uplift Faes has given to Rodgers’ defence is an example of why the manager was so keen to bring in more new faces during the transfer window, to refresh and drive a team which has enjoyed plenty of success in recent seasons to go again. 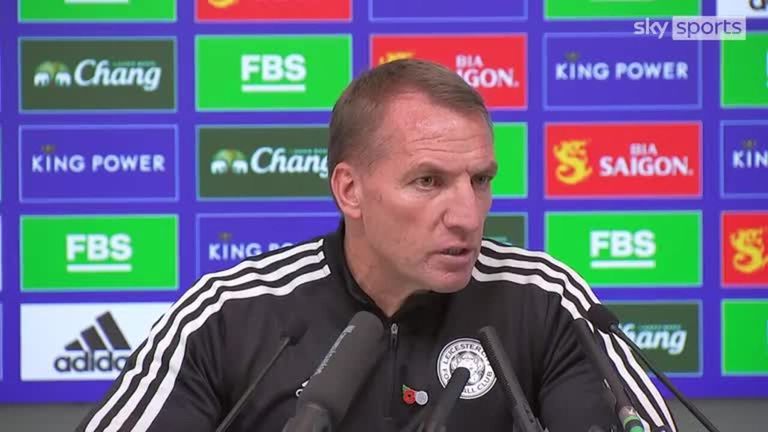 Leicester City manager Brendan Rodgers believes his team can continue to improve, following a recent run of good form. The Foxes had initially struggled for points at the start of the season

The World Cup break will give Leicester’s coaching and recruitment staff an opportunity to assess exactly where they need to strengthen next – but plans are already well under way for January’s transfer window.

“We needed that freshness, to add that energy to the team. The idea was to have three-four players to come in,” Rodgers says with a wry smile.

“I know as a club we’re looking forward and hoping we can do some business in January and hopefully those guys can have a similar impact.”

Rodgers: I couldn’t have played like we did against Man City 10 years ago

The immediate focus for Rodgers and his players, though, is to capitalise on their recent improvements and finish this first phase of the season strongly, with Premier League away games against Everton and West Ham sandwiching a Carabao Cup tie at home to Newport.

Rodgers is ready to attack the challenge. After feeling compelled to go to a 5-4-1 and try to shut up shop against Pep Guardiola’s Manchester City, he is relishing the prospect of his side playing front-foot, dominant football again at Goodison.

“It’s the evolution of myself as a coach. The set up against Man City, is something that 10 years ago I could never have done,” says Rodgers. “The feeling of compromise. “My game has always been based around the attacking intent and when I’m talking about attacking I mean defending as well, pressing forward, pressing high. But the experience and evolution of me as a coach – and I know I never have to do it too often – with a team as unique as Man City, with the level of player they have, you want to be in the game as long as you can.

“You can open up and press and do all the things normally associated with my teams but because of their talent you can find yourself down in the game and you’ve seen that with so many teams against Man City.

“I won’t play that way too many times in my career. But I do enjoy that challenge. Most games we’ll look to really go and bring our authority to the game and impose our way of playing on a game.”

Rodgers feels his development as a coach has also been enhanced by the tough times he and his players have been through this season. He’s confident Leicester will be the better for it in the end.

“It’s an area of the league where I haven’t been in since my first job as a manager when I went into Watford in the lower end of the Championship,” says Rodgers. “It’s been a great coaching challenge to take the team gradually away and that’s what you want.

“It’s easy when you’re winning and challenging for trophies but the challenge is totally different when you’re down at the bottom end. As a manager you can only improve from it.

“You’re relying on your knowledge of the game and players and the coaching. You keep your patience, which is very important. These players, since I’ve been here, have given me everything. They’ve been so good for me and it was about re-enforcing to them and keeping the composure so they could find that confidence again after the difficult start.

“I’m pretty sure they and the fans will get rewarded by that and come the end of the season, we’ll be in a much healthier position.”