China’s National Health Commission also said 2.3 million people had been tested in an effort to contain the outbreak in the capital that led to the closure of its biggest wholesale food market.

The number of confirmed coronavirus cases in Germany increased by 687 to 189,822, data from the Robert Koch Institute (RKI) for infectious diseases showed on Sunday.

The Institute also reported the death toll to be 8,882, one lower than Saturday’s, which was 8,883. No explanation was given why the number decreased by one, according to Reuters news agency.

South Korea reported 48 new cases of the coronavirus on Sunday, down 19 from a day earlier, Yonhap news agency reported.

The Korea Centers for Disease Control and Prevention (KCDC) said imported cases have dropped, but local infections rose amid a continuing spread of the virus in the Seoul metropolitan area and the central city of Daejeon.

Of the new cases, 40 are local infections, and eight are imported, raising the total caseload to 12,421. There were no additional deaths, keeping the total death toll at 280.

Australia’s second-most populous state, Victoria, on Sunday extended its state of emergency for four more weeks to July 19, as it battles a spike in coronavirus infections, Reuters reported. This came one day after the state announced it would reimpose restrictions capping visitors to households to five people and outdoor gatherings to 10, starting Monday. The limits had been relaxed on June 1.

Victoria reported 19 new infections on Sunday, the fifth day of double digit-rises. The state has now had 1,836 total confirmed cases, a quarter of Australia’s cases.

State health minister Jenny Mikakos said 210 of the cases are believed tied to community transmission, partly blaming families who have had big parties, lunches and dinners attended by people with mild symptoms.

Spain is dropping the country’s 14-day quarantine requirement for British visitors starting Sunday, when citizens of Europe’s Schengen zone countries will be allowed to freely enter the country.

Spanish Foreign Minister Arancha Gonzalez Laya told the BBC: “We are doing this out of the respect for the 400,000 British citizens who have a second residence in Spain.”

Gonzalez Laya says she hopes the British government will likewise drop the quarantine requirement for Spanish citizens travelling to the UK. Some 250,000 Spaniards have homes in the UK, she said.

Greece has reported one more death from the coronavirus while the small neighbouring country of North Macedonia reached a new daily record with 11 virus-related fatalities, according to the Associated Press.

North Macedonia’s death toll to date is 233, with 5,005 confirmed cases as of Saturday. Infections began to climb early this month after authorities lifted restrictions and ended a curfew. In a TV interview, health minister Venko Filipce said cases are increasing because residents ignored recommendations to avoid gatherings, wear masks and maintain social distance.

US President Donald Trump told thousands of his supporters that he had asked US officials to slow down testing for the novel coronavirus, calling it a “double-edged sword” that led to more cases being discovered. Trump said the US had now tested 25 million people, far more than other countries.

A White House official said Trump was joking about his call for a slowdown in testing.

The government has said the real number of infected people is likely significantly higher than the confirmed cases. 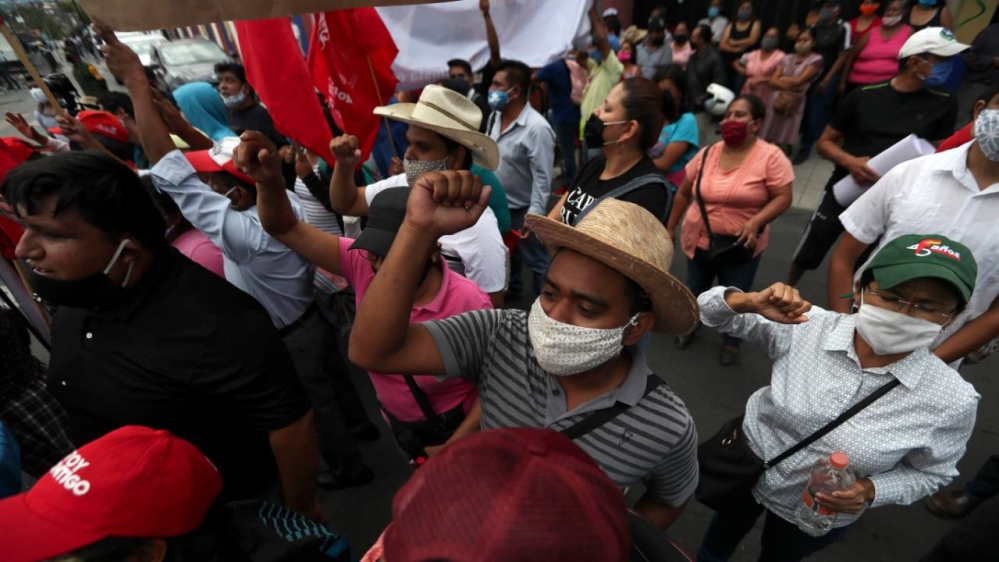 The resumption of Brazilian football was dealt a setback when the city’s mayor suspended matches involving Botafogo and Fluminense in order to give the clubs more time to prepare.

The Rio de Janeiro state championship became the first Brazilian football tournament to restart on Thursday when reigning champions Flamengo beat Bangu 3-0. However, Fluminense and Botafogo threatened not to play games scheduled for June 22, Fluminense players saying they needed more time to train, and Botafogo declaring they would only be ready to play in July.

With courts refusing their appeal to postpone the games and the two clubs worried they would lose points by a WO, Mayor Marcelo Crivella with an initial decree to suspend all games in the Rio state championship until June 25  that he reversed hours later to halt only Botafogo’s match against Cabofriense and Fluminense’s encounter with Volta Redonda.

Authorities have confirmed new cases after there had been none in Montenegro for several weeks, saying that out of the country’s 31 active cases, 26 were imported from neighbouring Serbia.

Those infected include some who went to a football game in Serbia’s capital of Belgrade and some citizens of the northeastern Montenegrin town of Rozaje who travelled to a town across the border.

You can find all the key developments from yesterday, June 20, here.

Tonga volcano: What to know about the eruption and tsunami

Crypto Exchanges And Bitcoin Are Poised For Massive Growth By 2030

Tonga volcano: What to know about the eruption and tsunami

How Tennis Apparel Became The Look Of The Summer