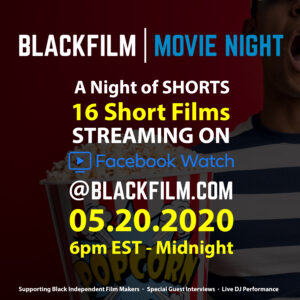 Blackfilm Movie Night – An Evening of Short Films on Wednesday, May 20, from 6pm – 12 midnight EST Live on Facebook Watch.

Join us a we celebrate and support Black independent filmmakers and writers during this COVID-19 crisis.

Lita Rosario, ESP – Entertainment & Intellectual Property Lawyer
Lisa Rosario, Esq. is an entertainment and intellectual property lawyer who got her start as the VP of Business and Legal Affairs for University Music Group, Inc. Lisa has worked with Missy Elliott, Tank, Sisqo, DRU HILL, Afrika Bambaataa and more. She currently is an adjunct professor at the University of the District of Columbia’s Department of Mass Media Visual and Performing Arts teaching “The Business of Music,

Carlos Simon – Composer
Carlos Simon is a Composer that’s traveled the world, is a part of the Sundance Music Institute and ASCAP Film Scoring program.

Jongnic Bontemps – Composer
Jongnic “JB” Bontemps is a Composer for Godfather of Harlem, Boomerang and most recently released the Clark Sisters biopic which is Lifetime’s highest rated original film since 2016.

Chuck Creekmur – Founder – AllHipHop.com
Chuck Creekmur is the co-founder of AllHipHop.com and has used his journalism skills and artistic talents to establish himself as a trendsetter and trailblazer creating a unique path in Internet content and technology. (pulled from online bio)

Monique Lauren Peters – Costume Designer
Monique Lauren Peters is a costume designer that started off as a celebrity stylist. Working with clients such as Tatyana Ali, Judge Lynn Toler, and Wendy Raquel Robinson. Also, her roots in independent film led to being an associate producer for The Bobby Brown Story.

Van Elder, Writer / Director
Van Elder was born in Compton, California.. He is a producer and director, known for Kings of L.A., Community Service (2014) and Perfectly Single (2019).

The Legendary Chris Washington
The Bronx native has been a fixture in the New York entertainment scene for the last 25 years. The Legendary has been featured in The Washington Post (October 2010); Guest DJ on Fox 5’ Good Day New York (October 2009); The New York Amsterdam News (July 2008). He has worked with platinum recording artists such as Lil’ Kim, Brandy, Sean Paul, T.I., Ray J, Timbaland and Fat Joe over a 20 year entertainment career. Hailing from the borough of the Bronx, this native New Yorker’s DJ skills has taken him on the road to cities near and far such as Boston; Washington, DC; Atlanta; Miami; Houston; Martha’s Vineyard, Chicago; Los Angeles and internationally in Cancun, Mexico; Nassau, Bahamas and Negril, Jamaica.

DJ Dana Game
Dana Cobbs is a professional DJ, working model, and advertising executive having worked at major ad agencies in New York City, and media companies including Time Inc. and Viacom. She has always been a lover of music and dancing since age 3, growing up on soulful disco and 80s hip hop influences that her parents played in their Bridgeport home. Dana began DJing in her 20s after the internet bubble burst in 2001. Today, she plays music throughout the U.S., at clubs, festivals, galas and private events. Taking from her marketing and advertising work, she is her own boss, and brand manager–playing all music that is soulful.

Donate to the Black Independent Filmmakers and Writers Fund

Instead of vilifying Boosie’s actions, we need to put them into a broader context — The Undefeated

Shop These ’90s Fashion Trends That Are Still Popular Today