Better Crypto to Own in 2023: Dogecoin or Shiba Inu?

Sometimes it’s better to be lucky than good; investors in meme token cryptocurrencies like Dogecoin (DOGE -4.27%) and Shiba Inu (DOGE -4.27%) massive returns at the height of the crypto bull market in 2021. But the good times are over for now; rising interest rates have cooled investor appetite for risker assets like crypto, and these two coins have given back a lot of those gains.

There’s hope for a market rebound in 2023, which could give investors the confidence to venture back into altcoins. But don’t rush to pile into these meme coins; consider the market’s landscape and this vital information before putting your hard-earned money to work.

Functioning as digital currency is the fundamental purpose of many tokens. A coin has to have functionality; otherwise, why would anyone desire it? It would be like getting your paycheck but being unable to spend it. Fiat currency has value because it’s accepted just about everywhere, even in most foreign countries.

The surge these coins saw in 2021 was driven by frenzied excitement, which mimicked the effect of demand because they were very popular for a short time. However, that ended like a game of musical chairs; the music stopped, and investors who had bought near the top and failed to sell fast enough saw most of their gains evaporate.

Unless the market becomes wildly speculative again, it may take adoption to drive actual demand for these coins, and neither has much real-world use right now.

The math works against both coins

Supply is the other factor that affects currency value; you can see below that inflation took off when the total supply of U.S. dollars jumped during the pandemic. Increasing the number of U.S. dollars reduced their buying power. 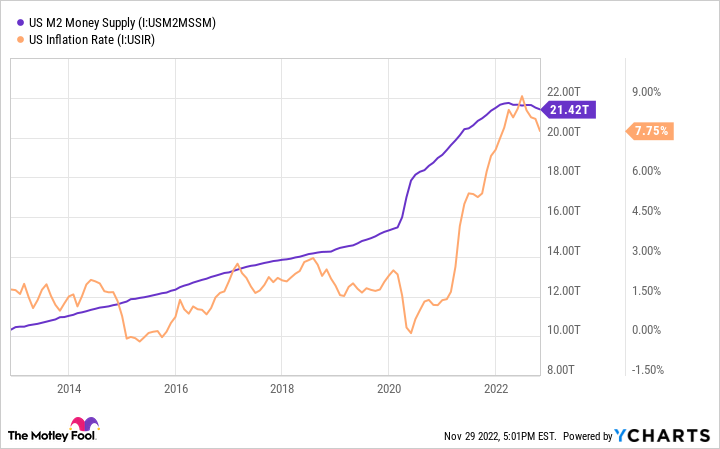 The same concept applies to digital currencies; one of Bitcoin‘s attractions is that there will only ever be a maximum of 21 million coins. Increasing demand would only reinforce their value because there are only so many Bitcoin. But Dogecoin has an unlimited supply, and 10,000 DOGE enter circulation every minute. Shiba Inu was built with a maximum supply of 1 quadrillion, more than 47 times the total U.S. money supply! There are roughly 589 trillion tokens in circulation today, making it highly unlikely that Shiba Inu will ever sustain a meaningful price per token.

Sparse adoption and a lot of supply make both Dogecoin and Shiba Inu crypto underdogs with little probable use or value over the long term. Both are meme coins and should be treated as such, purchased only with money you have no problem losing.

Consider this superior altcoin instead

But this bear market can be a buying opportunity; consider Ethereum instead of Dogecoin or Shiba Inu. Ethereum has the largest market value of any altcoin and is the most widely used blockchain, hosting roughly 3,000 decentralized apps. The coin has fallen 75% from its high, but the thousands of applications running on the Ethereum blockchain give it a better chance of seeing more mainstream adoption as the crypto industry grows and matures. 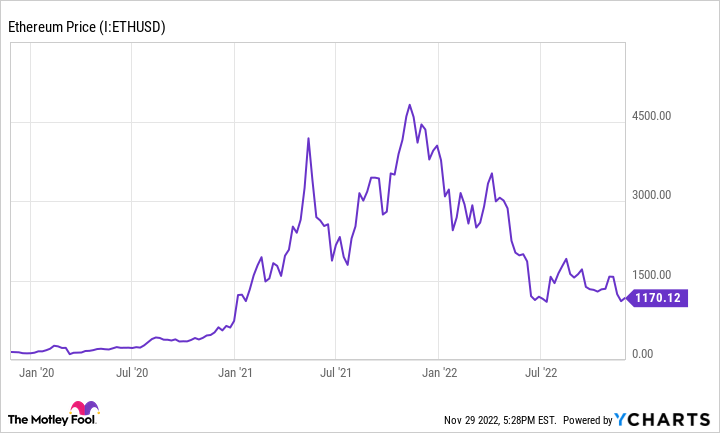 Bear markets don’t come along every day, and you don’t want to waste the opportunity chasing the fluff and ignoring the high-quality assets that go on sale. Keep your investments in meme coins like Dogecoin and Shiba Inu to a minimum and focus on Ethereum and other cryptos with a realistic shot at actual long-term value.

Why the stock market is channeling Goldilocks – CNN