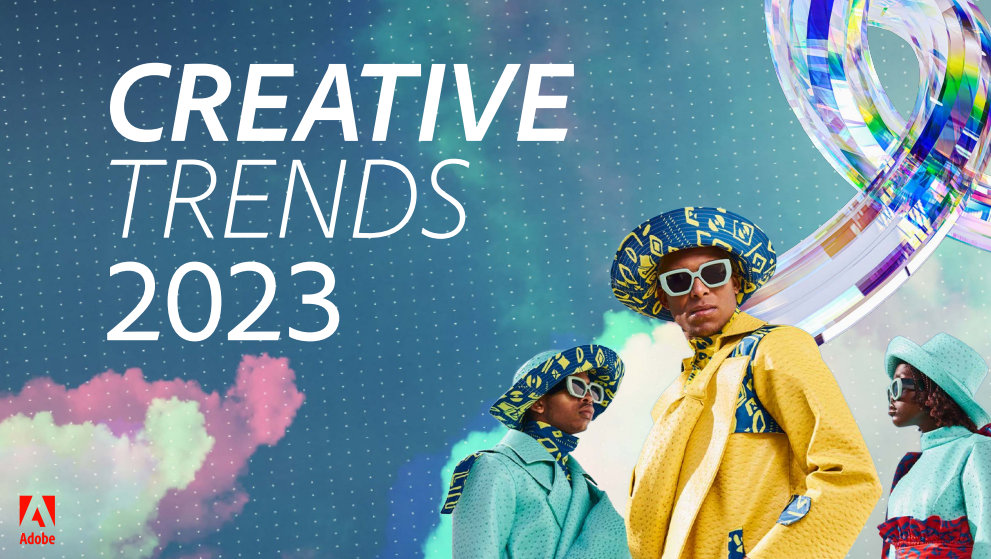 Adobe has pumped money into a research system which ‘taps into the power of the Creative Cloud’s global network of creators to bring you insights into the creative trends growing throughout 2023′. That’s right, Adobe is watching you.

After collating its customers’ data, Adobe makes finding based on this ‘extensive internal and external data’ to predict what will dominate the year ahead. The gift to its customers is to provide four motion, visual, and design possibilities ‘to make… your own’. The keys to a successful 2023, apparently.

Without further ado, here they are: Psychic Waves, Real is Radical, Animals and Influencers, and Retro Active.

And to think this e-mail was relegated to the Spam folder! A serendipitous discovery, which we are proud to share with readers.

Although there is a bit to unpack here. Those four ‘trends’ are fairly abstract, and we hope to provide more clarity on behalf of Adobe.

Have you been paying attention to what’s happening at Silicon Valley? The genius tech bro and bro-ettes are doing whatever it takes to expand their consciousness and have an edge on the competition. 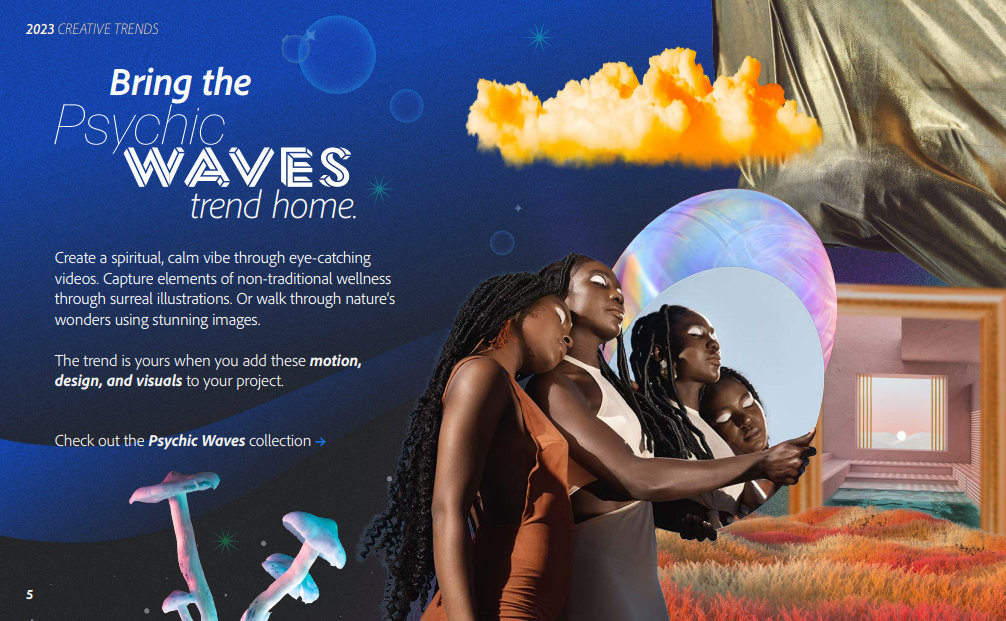 This has led to widespread micro and macro dosing of psychedelics by people who are nothing like the traditional ‘psychonaut’. And there has simultaneously been a groundbreaking shift for medical trials to research whether psychedelics may treat things like PTSD and brain injuries.

‘The post-pandemic shift towards prioritising mental health and wellness is driving new ways of exploring spirituality, nature, and wellness — moving beyond the physical world,’ Adobe Stock states. ‘Get on a new wavelength and take a ride through these dimensions of mesmerizing gradients and rich visual storytelling.’

While Adobe Stock doesn’t directly attribute this trend to the latest psychedelic awakening, terms like ‘moving beyond the physical world’, ‘new wavelength’, ‘take a tide through these dimensions’ is pretty trippy talk. The kind of terms uttered by a Mullumbimby shaman leading a drum circle at Wategos Beach.

So grab a fistful of Psilocybin mushrooms for your next photo shoot to make some psychic waves.

Adobe’s ‘Real is Radical’ creative trend is all about leaving the glossy-magazine perfection behind and progressing toward body positivity and diversity. ‘As expectations for diverse and authentic images become mainstream, the demand for real, unvarnished moments, experiences, and realities soars.’ 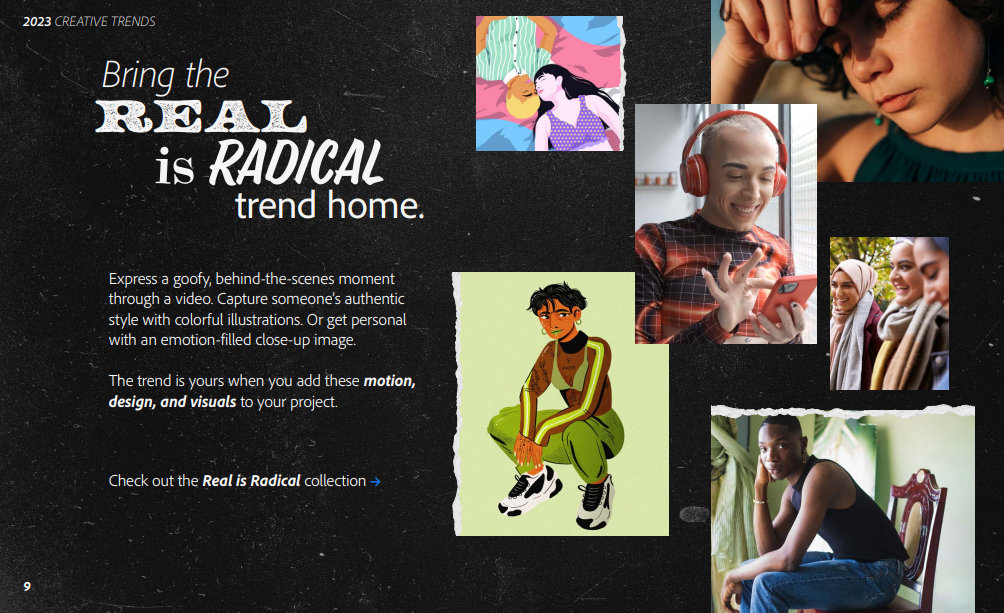 As an Arts graduate millennial who pays close attention to cultural shifts, Adobe is coming across like an out-of-touch boomer who is a few years late on this movement. Maybe next year the visual trend will be these crazy new user-generated graphics called memes and fidget spinners?

The pictures in this collection do, indeed, show a diverse range of people with a variety of skin colours and weight sizes. Although I’m not sure if they should be described as ‘unvarnished moments’.

‘Whether it be a real-life furry friend or a charming anime avatar, charismatic creatures have proven themselves to be powerful tools that attract and retain consumer interest and engagement. As a result, they have become a dominating presence in brand messaging, proliferating across sectors in the form of anime, illustrations, photography, and 3D renders.’ 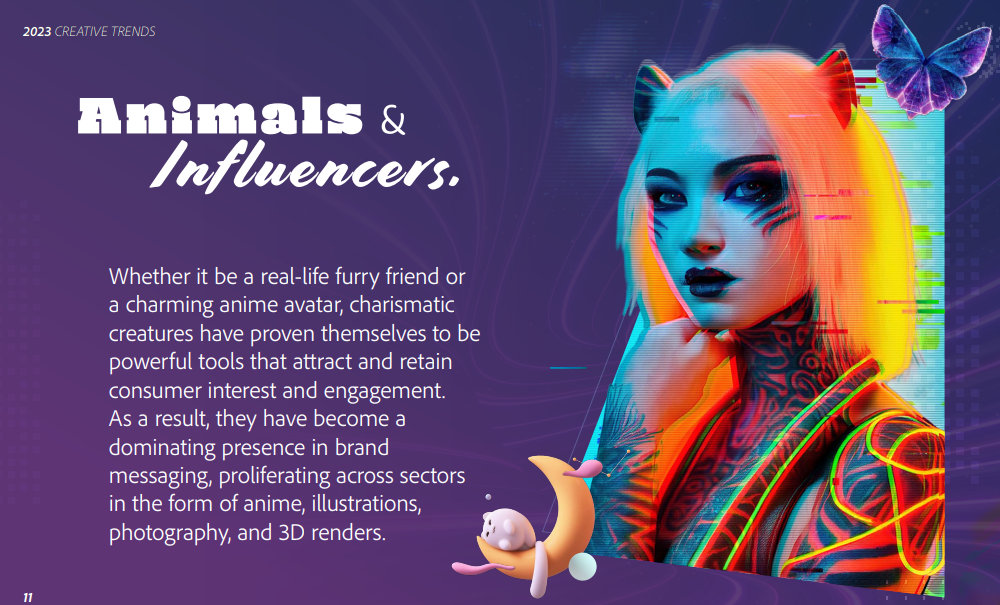 Adobe is using a graphic of a tattooed CGI woman wearing animal ears with cat-like make up. This is a depiction of a ‘furry’, an extremely odd new cosplay movement that’s growing in popularity. Instead of dressing up as a super hero for comic con, or ‘larping’ as a medieval knight, some people are interested in wearing mascot outfits to anthropomorphise animals.

Although Adobe Stock’s Animals & Influencers collection includes many strange plastic-y cartoon virtual avatars. Reminiscent of Mark Zuckerberg’s dystopian vision, where we plug into a head set and live in the Metaverse. Fortunately that has been a major flop, and no doubt this collection will follow suit.

Adobe might have nailed this one, as western society experiences an unexpected Y2K fashion revival. 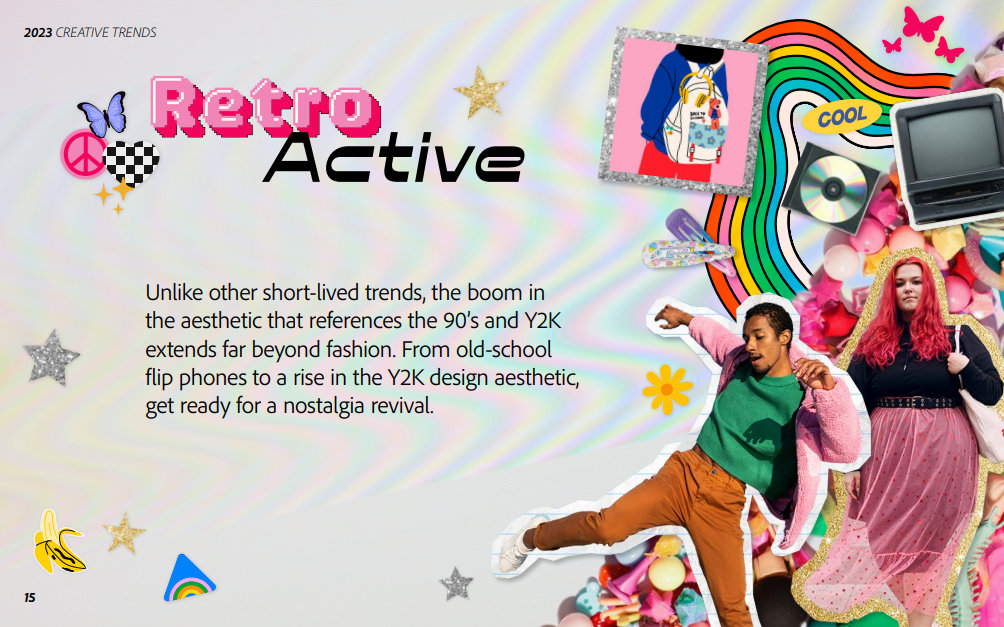 It doesn’t feel like long ago that we captured photos with a 4-megapixel compact camera and burnt them onto a CD to share them with family and friends. The internet before social media. For some unknown reason this era is being embraced by the youth, with kids on TikTok trying to create crappy pixelated digital photos.

‘Unlike other short-lived trends, the boom in the aesthetic that references the 90’s and Y2K extends far beyond fashion. From old-school flip phones to a rise in the Y2K design aesthetic, get ready for a nostalgia revival.’

Speaking of short lived trends, how long was the flip phone relevant for?

And with that, you’re armed with the four sacred Creative Trends of 2023. Use this knowledge wisely.