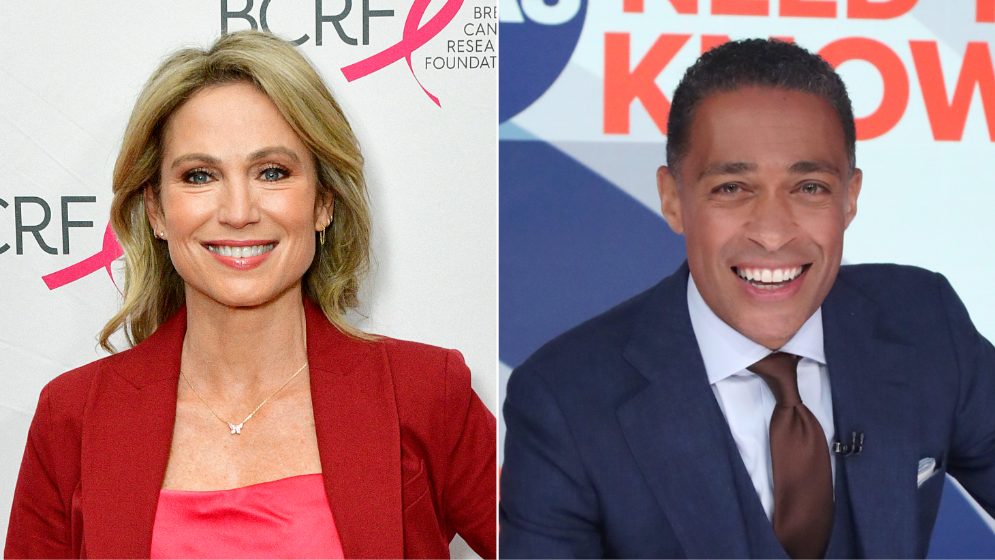 Amy Robach and T.J. Holmes will be benched from their anchoring duties at ABC News’ “GMA3′ while the news division weighs the effect their recent disclosure of a romantic relationship might have on the program and the company, ABC News President Kim Godwin informed staffers Monday.

Godwin told ABC News employees during an editorial call Monday that Robach and Holmes had not violated any company policy, according to a person familiar with the matter, but indicated ABC News felt the matter had become “an internal and external disruption,” and “wanted to do what’s best for the organization.”

ABC News declined to make executives available for comment. Gio Benitez and Stephanie Ramos will co-host Monday’s broadcast, this person said, but there’s not a sense at present of how the program will be staffed for the rest of the week or when Robach and Holmes might return.

The duo has generated reams of unwanted attention since the revelation last week that they had been involved romantically for some time, even though most outsiders believed each anchor was still in a committed marriage. Since the disclosure, the pair has been the focus of tabloid reports, with viewers analyzing their every word on camera to see if either was making reference to the discovery of the relationship.

ABC News and its corporate parent, Walt Disney, have reason for concern. “GMA3,” an afternoon extension of the popular “Good Morning America,” has been a bright spot in daytime for the network. In 2021, the program generated nearly $43.4 million in advertising, according to ad-tracker Kantar, a jump of 26.1% from the nearly $34.4 million it captured in the previous year. Just days ago, ABC News was touting the ratings performance of “GMA3” and comparing it with rivals such as CBS’ “The Talk’ and NBC News’ “NBC News Daily.”

The company seemed to have no worries last week about putting Robach and Holmes on screen. On Friday, the pair were serving up news and banter that are a regular part of the afternoon showcase.

“GMA3” was originally devised as a venue for light celebrity news and conversation, and was hosted by Michael Strahan and Sara Haines. The idea was simple: Expand the reach of “GMA,” which would cost less to do than run other kinds of original daytime programming, and build new roosts for advertisers who had faith in the dependability of the news brand. But the first concept never really gained traction, and when the coronavirus pandemic hit, executives turned the program more toward news, tapping Robach, a veteran of “Good Morning America” and “20/20,” along with medical correspondent Dr. Jennifer Ashton. Now, “GMA3” has evolved into an hour that mixes the latest headlines with segments focused on entertainment and inspiration.

Other networks have had to contend with on-air relationships that blossom into something more. At MSNBC, “Morning Joe” co-anchors Joe Scarborough and Mika Brzezinski kept a romance hidden for some time, but the pair eventually married.

Married Pastor, Who Stepped Away After Messaging Another Woman, Cheered as He Returns to Pulpit - PEOPLE

Want 4 Tips on How to Catch Bass in the Winter?